Reaching its 25th anniversary next year it’s save to say 1998’s Wild Things has gained a cult status. Not in the least due to the gratuitous lesbian sex scene between Neve Campbell and Denise Richards. But Wild Things offers more than just some teen starlets of the 90s getting their freak on. It also contains quite a convoluted plot which the movie is even trying to explain as the end credits are rolling. Add in a scene stealing cameo by Bill Murray, a brooding score by George Clinton and some full frontal nudity delivered by Kevin Bacon and it’s cult status is easily understandable.

The core plot of Wild Things starts off simple. Sam Lombardo (Matt Dillon) is a beloved teacher and well-respected Florida high school guidance counselor. His life is turned upside down when two female students accuse him of rape. One a popular rich girl whose mother he had an affair with, the other an outcast from the wrong side of the tracks, or swamp in this case. When the trial has a surprising outcome, local police detective Ray Duquette thinks there is more to this whole situation than meets the eye.

And he’s right of course, or else this would be just an episode of Law & Order: SVU.

From that point on the movie becomes a rollercoaster of twists and turns. Chances are that when the end credits have rolled, you’re still wondering about how all the parts fit into place. And that’s exactly what the movie sets out to do from the get-go. Does it all make sense? Well not really, and schemes as convoluted as this only work in movies. But it is damn entertaining. 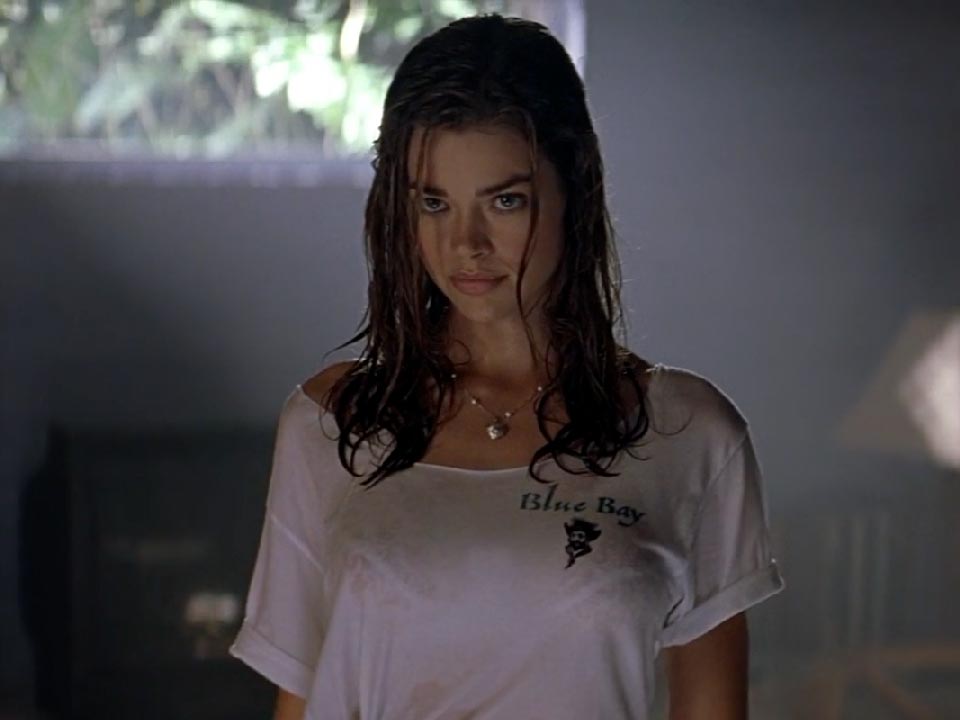 The four main cast-members play off each other with ease, though Richards is the weakest link of the bunch as her acting chops leave something to be desired. But she’s in the movie to be desirable, as she oozes sex-appeal in almost every scene she’s in. Much like Megan Fox ten years later she would be the it-girl for a short period in time where she would get roles in high profile movies like Starship Troopers and The World Is Not Enough just based on her looks.

But the MVP is Bill Murray who gives a scene stealing performance as a shady lawyer who manages to turn the whole trial around and introduces the first big twist into the movie. While his character has only limited screen time, he shines every second he’s on screen. His small office plays even into his character, with his assistant sitting behind a screen and he even has a collar around his neck due to some insurance scam.

And then there’s the sex.

Wild Things was released at a time when R-rated movies with nudity were still a thing and the internet wasn’t something you would find in each household. Wild Things is one of those classics that features scenes many teenage boys and occasional girl probably watched with the curtains closed and the doors locked. And not because it’s scary.

While certainly an attractive woman, Neve Campbell leaves most of the action up to Denise Richards who provides the movie with the female nudity. Campbell plays a goth-like character running around in baggy trousers and a tank top. Richards is a snobby rich girl, who walks around in short skirts, always smiles and constantly flirts with Lombardo. Her leaving the home of Lombardo crying after she was constantly trying to get in his pants and throwing herself at him is basically the movie’s first small twist.

I also loved the aesthetic of movie. Wild Things makes good use of its Florida setting, the swamps and the brooding atmosphere. It’s a gorgeous movie to look at and the area is certainly a character in the story. The shots of alligators convey the idea of them being silent witnesses. I can’t imagine this movie making the same impact should it have been set in downtown New York or a small town in Alabama.

Wild Things isn’t perfect, but it’s also never intended to be the next Godfather. It’s a slick and sexy thriller with some clever twists and turns. A movie you’ll probably enjoy. If not there’s always that famous sex scene between Campell and Richards to make it your while’s worth.