Wild Gals of the Naked West is the third and last “nudie cutie” Russ Meyer would make before trying his hand and do something different with his next movie, Lorna, which was the start of his Gothic period. These three movies, also consisting of The Immoral Mr. Teas and Eve and the Handyman, share a lot of things in the way they’re made and the themes they explore. All movies are basically silent movies, feature a narrator, have abstract imagery, a male protagonist, a bright color palette and busty women. Of the three movies I might even find this the most fun one. 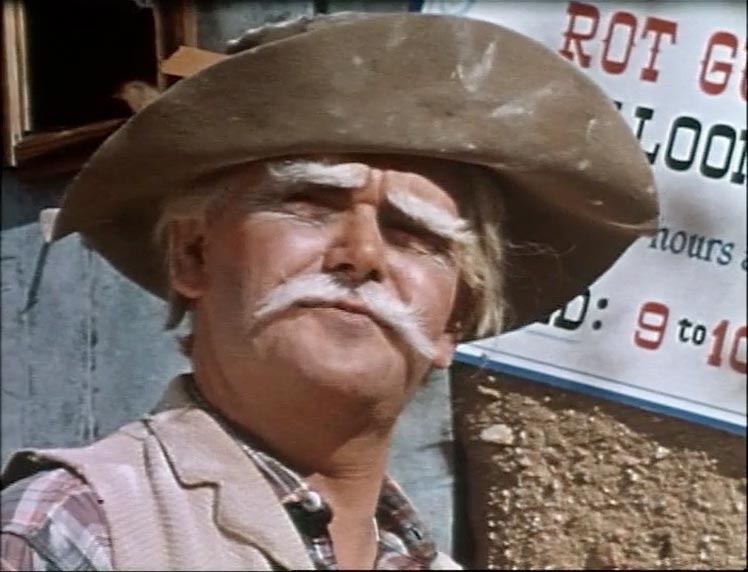 In Wild Gals of the Naked West and old guy recalls events that occurred in his western town a long time ago. There isn’t much more plot to it, once again it’s a series of vignettes which combine humor with female nudity. In the final vignette a stranger comes into town and with his enormous gun begins to clean up the streets (and prairie) of practical jokers and bazooka wielding Indians.

The nudie cuties written/directed/produced/etc by Russ Meyer are one of a kind. They consist of a strange mash-up of gratuitous nudity and pretentious art-house elements. Mr. Teas had its fair share of WTF-moments, Eve also contained a strange scene in an art-school and in Wild Gals of the Naked West there is a lot of weird imagery included. Meyer inserts shots of real hands playing a drawn piano and exchanges cheap boob shots with various over-stylized images. Inside scenes almost all are shot on a set in which a lot of the surrounding have been painted on walls, while the outdoor shots are shot on location. At one point somebody is in a bar which consists of a bartender standing in front of a wall with the bottles painted on it, when somebody is kicked out of the bar we see hem end up in front of a real western bar. 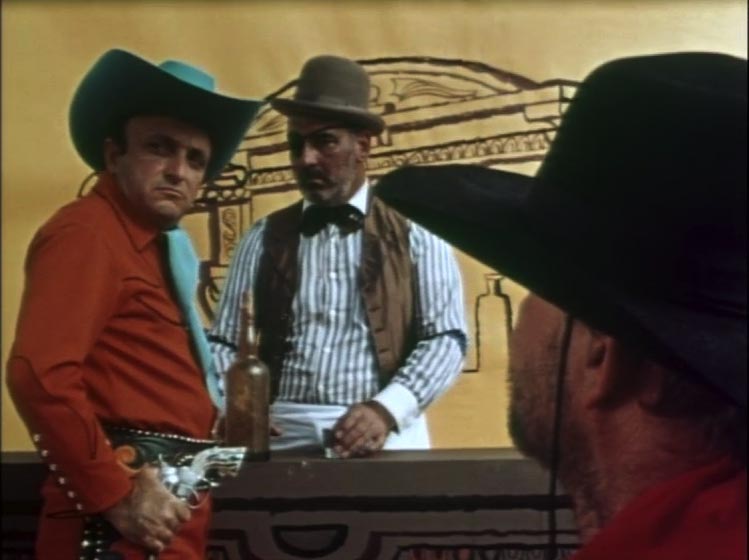 Not only weapons are drawn, but entire sets as well

Wild Gals of the Naked West feels bigger than both Meyer’s previous movies. It has a rather large cast and the indoor sets, while simple, seem to be have given thought and effort. But as is the case with all three movies, the characters are all one-dimensional. The only thing we get to know about them, what drives them and such, is told by the narrator. It isn’t much. Wild gals focuses more on running gags, boobs and abstract imagery depicting sex. As with most of Meyer’s movies the comedy falls flat, but did occasionally made me grin. He doesn’t try to be pretentious as one of the recurring jokes include a couple of guys literally displaying toilet humor as they push occupied outdoor toilets on their side, change the men/women signs and such. There’s also a guy in a gorilla suite running around. I’m not sure if he was supposed to be an actual gorilla or just a guy in a suit. I hinge to the latter because a gorilla in the old west would just be plain weird, then again I wouldn’t be surprised as this was the way to “realistically” portray such a wild animal on screen.

Wild Gals of the Naked West has a running time of 61 minutes and unlike the previous two movies feels better paced. Somehow it manages to grab your attention despite the lack of plot. Meyers knows how to keep things visually interesting and I’m actually not referring to boobs, though they are on display aplenty, in all shapes and sizes. Mostly big though, as is his trademark.

This is by no means a great movie, but it has its moments. While Eve and the Handyman felt small and cheap due to its compact cast, Wild Gals of the Naked West redeems this by inserting so many cast members in nameless roles it’s hard to keep track of who’s who in the credits.

Wild Gals of the Naked West