Life sucks when you’re Casey Ryback. Even when you use public transportation you’re bound to come under siege of some highly skilled mercenaries who take everybody hostage but you. In Under Siege he fought back against mercenaries who had taken over a battleship. In Under Siege 2 he has to do the same on a rather big passenger train. All aboard for some serious ass-kicking!

Steven Seagal is back as Ryback. There’s sadly no sign of Jordan Tate this time around. There’s no mention of her either. Guess things just didn’t work out between her and Ryback. Ryback does own a restaurant now but on occasion performs some covert ops assignments according to some dialogue with his personnel. His estranged brother died and so he goes to his funeral together with his niece. Instead of a flight or a road trip by car they take a train. But only because there already was a Die Hard on a plane. 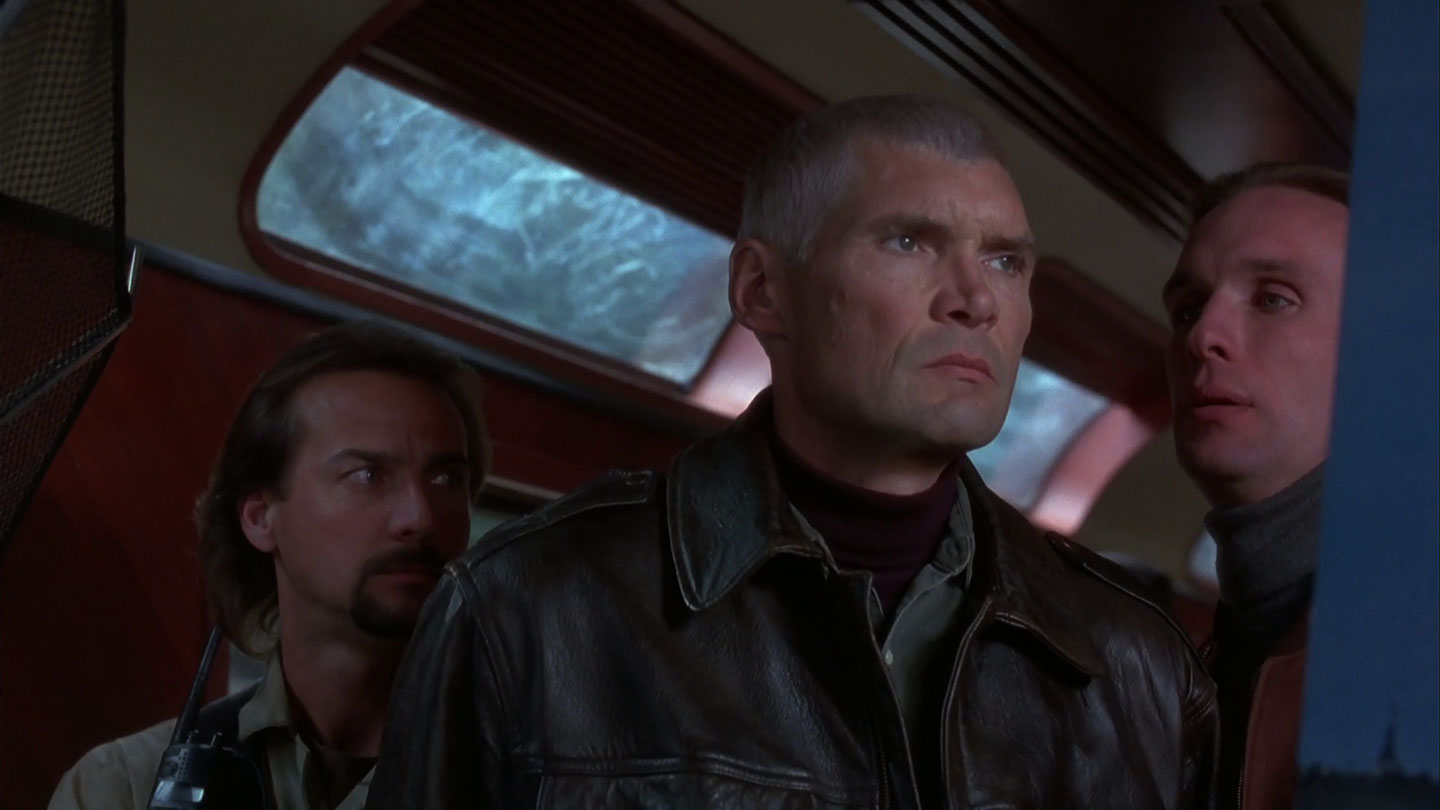 At the same time a brilliant but mad scientist hijacks this train. He uses it as a moving and therefore undetectable launch system for a satellite he created. A satellite that is able to generate earthquakes. His plan is as follows: in exchange for a billion dollars from wealthy Arabian America-haters  he will generate an earthquake that will destroy the secret nuclear facility under The Pentagon. This earthquake will destroy both the Pentagon as well as the rest of Washington.

Eric Bogosian has a lot of fun with the character, channeling Tommy Lee Jones’ performance of William Strannix in the first movie. He nails every line in the movie. Joining him are a couple of well known faces. Actors who have that familiar face and always turn up in supporting roles and bit parts. We have Patrick Kilpatrick who took on Van Damme in Death Warrant. There’s Peter Greene who was Zed in Pulp Fiction and Dorian in The Mask. The head honcho is played by Everett McGill who played Big Ed Hurley in Twin Peaks. So this one of those cases where you can play “name that face”. 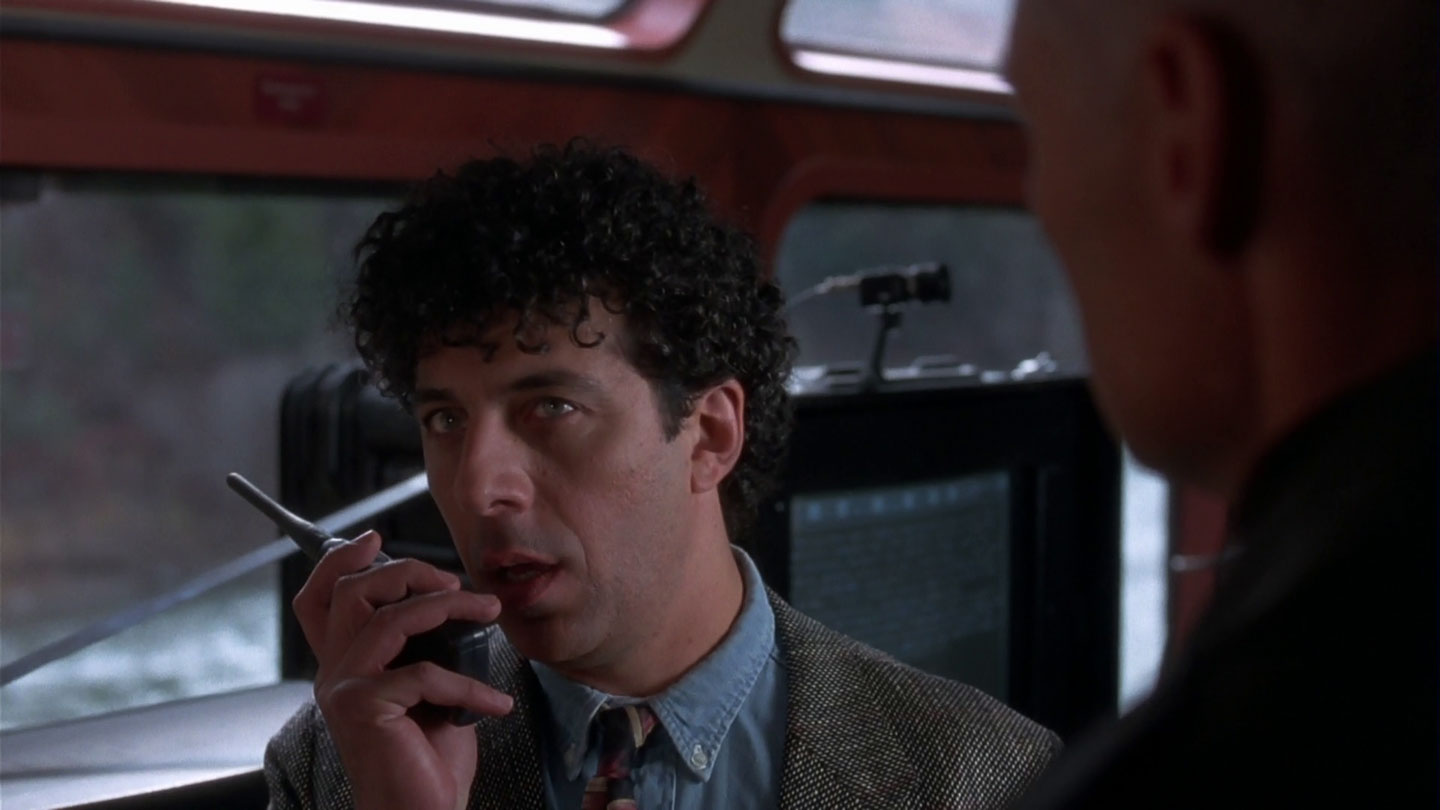 This applies to the good guys in Under Siege 2 as well. Seagal is backed up by his niece Sarah. She’s played by Izzy from Grey’s Anatomy (Katherine Heigl). Morris Chestnut plays Bobby, the train’s porter. His function to help to either help Seagal or to rescued by him depending on what the scripts needs at that moment. He’s the Jordan Tate of this movie, only without tits. Seagal even spouts the same dialogue to him as he did to Jordan: I’m making a bomb. Luckily he doesn’t kiss him at the end like he did with Jordan. That would be… ehm… awkward. Then again, it’s 2009!

Under Siege 2 is Seagal’s first sequel. Immediately after the failure that was On Deadly Ground he came back strong. It’s once again a really fun movie even though it’s just “Die Hard on a train”. Now I wondered upfront how they could make a “Die Hard on a train”. A train just doesn’t seem so massive that you can easily hide from villains and go many places. Well they pulled that off by using a big fucking train. This thing is huge. It’s got two levels and is fairly wide. There are 10-20 wagons and even some hidden passages through lunch-elevators and behind toilets. 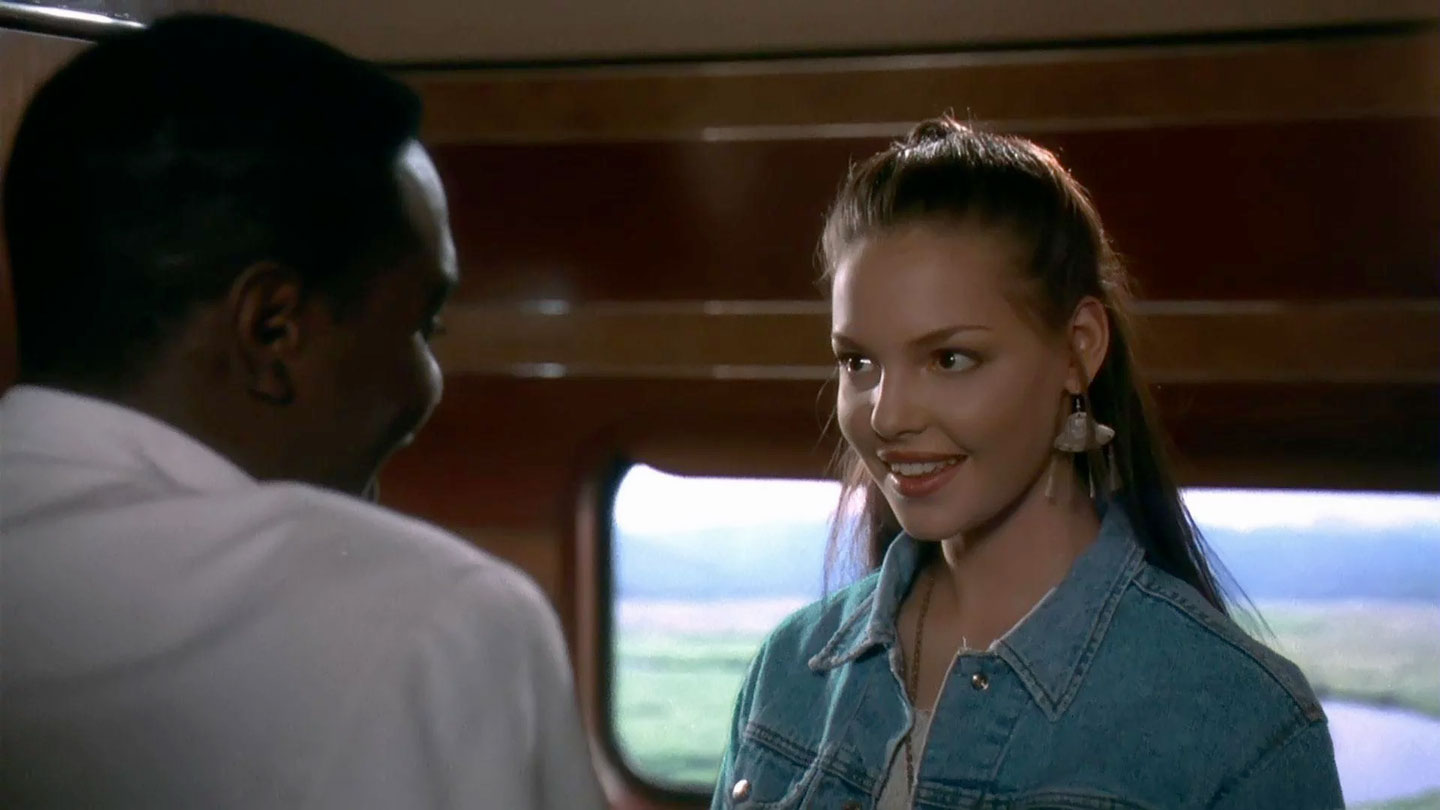 The downside of this environment is that Seagal can’t really use any space around him in fights cause there isn’t any. Normally people fly through entire rooms when in a fight with Seagal. Now they are against the wall immediately. That sucks, but Seagal is still imposing enough here to make every blow count. He’s aided by the porter Bobby. Like earlier said he fills the Jordan Tate role; he starts out as a whiny little bitch, but ends up doing some bad-ass shit. People have commented on him being annoying and an unnecessary character. The latter is true, but I don’t agree on the annoying part. He’s pretty funny in my opinion but that’s something that he can’t take the sole credit for.

A lot of credit goes out to the writers who have filled the script with memorable quotes and juicy lines. Much like in the previous Under Siege. Good writing is half the movie. Though in terms of the plot it’s all Xerox’d from other Die Hard-clones, the characters and their lines make this movie stand out from them.

There is however one piece of dialogue that puzzled me. All of Seagal’s films have an exposition scene about how tough this guy is. In this movie his niece Sarah states that Uncle Casey not only has two Navy Cross Medals, “he even has medals so secret…” Now how much sense does that make? What do you do with so-called secret medals? Put them in a safe for no one to ever see them? What’s the point of that?

Apparently there is such a thing as a secret medal. These are awarded at a closed ceremony where they are presented to the recipient. They do not get to keep the actual medal. It’s all just a big show. But since it’s all confidential, Seagal’s niece should not have any knowledge of it. 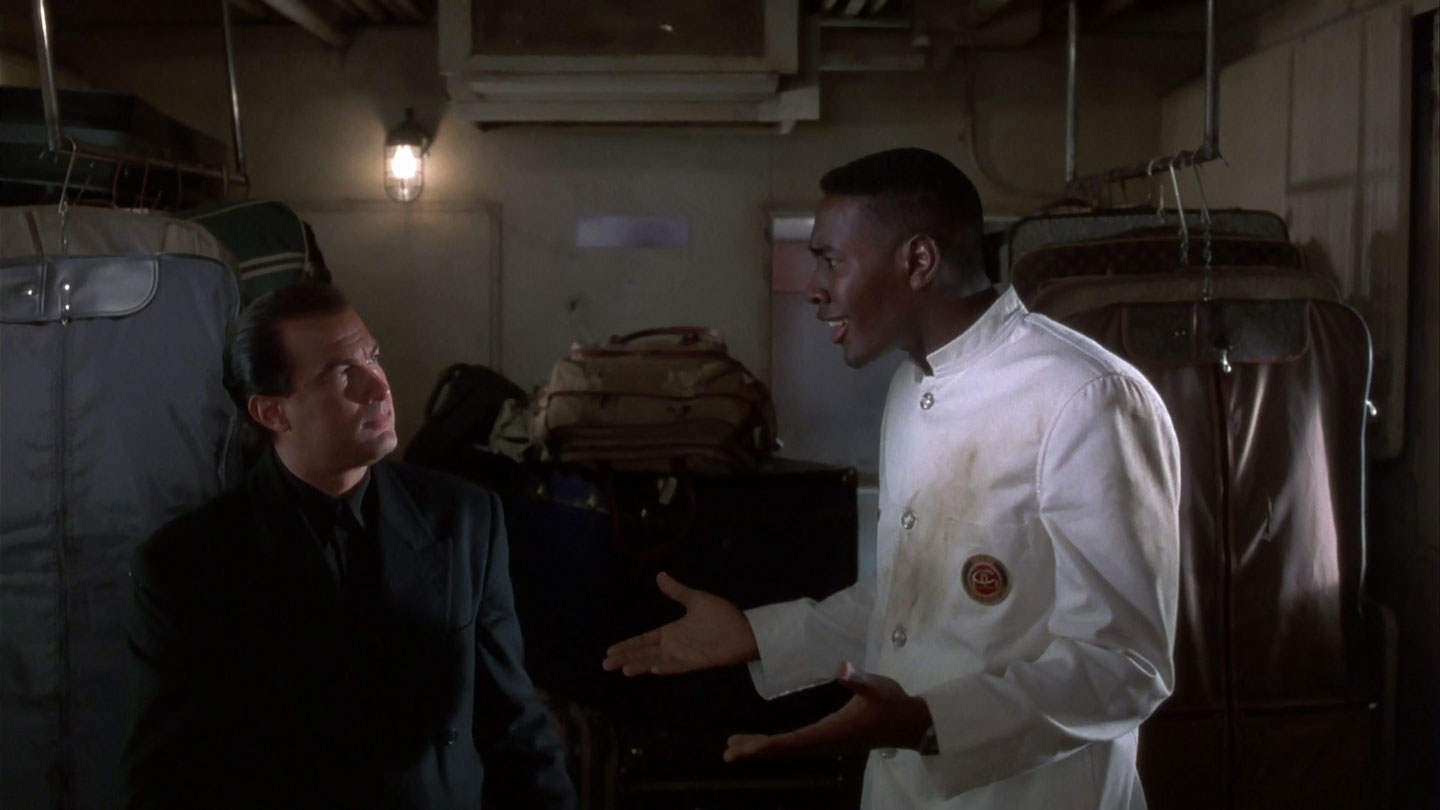 Around this time Seagal became superhuman. He always was pretty untouchable, like in Out For Justice, but in most of his movies he did have some trouble with his opponents. Het got beaten up in Above The Law, gunned down in Hard To Kill and had back-injuries in Under Siege. By now he’s even bulletproof. It’s common knowledge that bad guys can fire their clips empty and not hit a thing while the good guys always hit the bulls-eye with a single shot. In Under Siege 2 Seagal even gets shot by a sniper in the shoulder. He bleeds but seems to have enough strength to hang upside down under a moving train for a couple of minutes and then climb back onto the train.

The bleeding is noticed by Bobby to which Seagal responds: “You think this is being shot? This ain’t being shot.” Ehm… what was it then? He also states that there’s no bullet in there. So that must mean it went right through. The rest of the movie the wound must have been magically healed because it disappears and is never mentioned again. No problem hanging of the side of a cliff with a shot up shoulder. Guess they teach you that also at SEAL-training. Casey Ryback should have been in Predator: He ain’t got time to bleed.

Under Siege 2 is also the movie in which Seagal for the first time starts using his whisper-talk in normal conversations. The first half of the movie you really have to pump up the volume to listen to what he’s saying. Nowadays it’s such a trademark it’s hard to imagine there was a time he didn’t do that. In previous movies he talked normal and even raised his voice to make some motivational speech or threat like in Marked For Death or Hard To Kill. Well the whispering started here, sadly. It doesn’t make you menacing, it makes it hard to understand what you’re saying.

Come to think of it, that could be the title of one of his future movies:

Steven Seagal is…
Hard To Understand