In Total Recall Douglas Quaid (Arnold Schwarzenegger) is a happily married man who keeps on having strange dreams about Mars and a different woman than to whom he’s married to. The year is somewhere in the not to distant future when humans have colonized Mars and either live there or go there on vacation. Doug wants to go over there, even live there, but his wife Lori (Sharon Stone) hates Mars. The latest trend on future Earth are memory implants and this provides Doug with a way to fulfill his wishes. “Why go on a real vacation with all the hassles when you can just get a memory implant of a perfect vacation for a lot less?” the commercials rhetorically ask themselves. Triggered by this idea Doug goes to Rekall for an implanted vacation, even though his best friend at work warned him about people being lobotomized. He even chooses the package in which he can change his own identity and become a spy. But then things go wrong and we’re left with one question: is this real or all a dream?

Based upon a short story by Philip K. Dick Total Recall isn’t the type of movie you would consider Arnold Schwarzenegger for. A science fiction movie which plays with the idea of this being all real or just a dream is miles away from the light fare of Kindergarten Cop or mindless action like Commando. Then again Arnold has always picked his movies with care choosing a good plot over a quick buck. Not that every choice was a good one, but you can’t argue he has some really good movies on his resume.
Total Recall has been tailored to the talents of Arnold. Instead of an every day kind of guy, they made Quaid a construction worker so they have an excuse for his physique. Though we all know, most construction workers hardly look like Arnold. Another thing that is written for Arnold are the post-mortem one-liners he gets to say whenever he kills someone. “Consider that a divorce!” after he shoots his wife Lori in the head is one of the most memorable.

Total Recall is directed by Paul Verhoeven who previously directed the smash hit and ultra-violent RoboCop. He takes the same approach her as he really pushes the R-rating to its limits. There’s gratuitous nudity (like the three-breasted woman), rough language and lots of graphic violence. A lot of people get shot point blank in the head, there is a guy whose arms are ripped off and in one scene an innocent bystander is used as a human shield on an escalator. They keep on shooting at him and when Arnold finally drops the body Verhoeven chose to insert a shot of the pursuers walking over the corpse. It’s those small things that make it truly over the top violent.

One might consider Total Recall to be Arnold’s take on North By Northwest: an innocent man suddenly finding himself in the midst of people who are after him for reasons unknown to him. The script has several moments when it plays with the “is it all a dream scenario”, most notably when the owner of Rekall pops us midway through the movie trying to convince Quaid he’s dreaming and to persuade him to take a pill which will have him wake up at Rekall. Instead of fading out to black the movie fades out to white suggesting he’s waking up, but not after saving the planet and kissing the girl, just like he requested when he ordered the memory implant. My guess it was all a dream, because only in dreams complete atmospheres are created withing minutes.

It’s also the weakness of the script as parts are too farfetched to make any sense, even in a movie about a guy turning out to be some double agent who has to save an entire planet and provide it with an atmosphere by putting his hand on a button designed for an alien hand. As preposterous as it is, it’s also part of the charm of Total Recall. While everything we might be watching might all be a dream, this is one of those cases it’s not frustrating to accept that the past 100 minutes where possibly a figment of somebody’s imagination, unlike other movies which incorporate the same “twist”. Total Recall is upfront with us about the dream possibility and leaves it to the audience to decide whether this was all a dream or not.

Because the leading man is Arnold Schwarzenegger there is no real room for character depth, simply because that’s out of his reach as an actor. This is a guy who can believably dispose of 8 guys at once, but more than one emotion in a scene is too much. That’s why a movie like this is tailored to him, but also why a movie like this is hardly ever mentioned when people talk about classic science fiction movies. Arnold has never been a good actor, just a guy with enormous screen presence.

As a science fiction movie partially set on Mars Total Recall is full of special effects and most of them hold up pretty well. I dislike the design of the future vehicles which also seem to have inspired Time Cop. Did they really think that 100 years from now people would be driving those square uncomfortable looking cars? Those Johnnycabs look even worse and the dummy driving the vehicle is something I didn’t find realistic 25 years ago, let alone now. You have got the admire the effects work on display here, only when you look at it really close do you see it when they’re using puppets, animatronics and models. Total Recall is full of great make-up effects and intriguing special effects like the scene where Arnold is disguised as a woman and his disguise goes haywire. 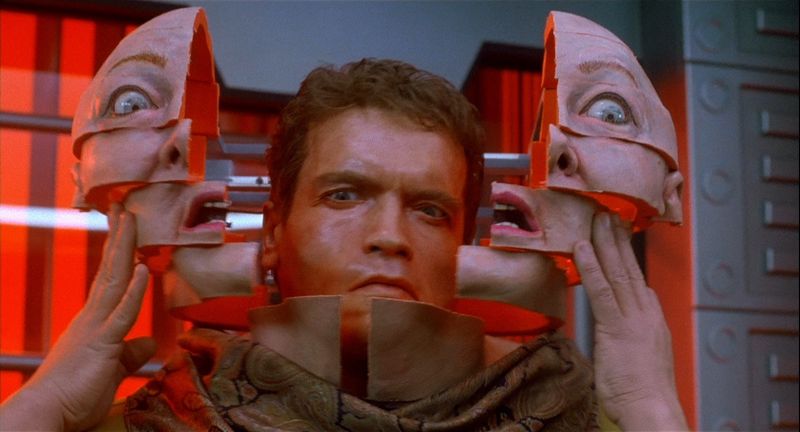 Total Recall is a good science fiction movie and might have been even the start of action movies having more intricate plots, or as I like to call it a “high concept action movie”. In the 80’s they were mostly simplistic stories, but in the 90’s  Stallone became The Demolition Man and Judge Dredd, Van Damme was a Time Cop and a Universal Soldier. All movies that have a fresh plot, a larger more versatile cast and better overall set design. Total Recall might have started that trend with Arnold running around on Mars with mutants, crazy vehicles and whatnot.

They don’t make movies like Total Recall anymore. The hard R-rating is something most studios tend to avoid as they want to cater to the largest audience possible meaning that everything has to be PG-13. Even the dreary remake, which barely contained any humor, toned down all the things that made this movie so good. Total Recall is one of those classic science fiction movies that is still entertaining after all these years.