As a young boy in the 80s I grew up on shows like He-Man, Transformers, M.A.S.K. and G.I. Joe. Saturday morning cartoons that were basically twenty minute toy adverts. Not that I saw it that way when I was eight years old. To me those were all just cool cartoons. Cartoons which just so happened to have a lot of licensed toys in the toy store. And I fell for it as did everybody at that age. I still have a couple of Transformer toys laying around in the attic. One of them being Optimus Prime. As far as commercials can go, they have had a lasting impact on my life as I still have fond memories of those four years the cartoon ran. During those four years they also released a feature film, simply titled: The Transformers: The Movie.

The cartoon was like any other cartoon on TV at the time. Every week the bad guys hatch up a new plan which the good guys then foil at the end of the episode. It was M.A.S.K. against Mayhem, He-man against Skeletor, G.I. Joe against Cobra and of course Autobots against Decepticons. Since these cartoons were made to sell toys they would often feature a new character or vehicle every week. Sometimes a character would only appear in one episode and never to be heard of or seen again. 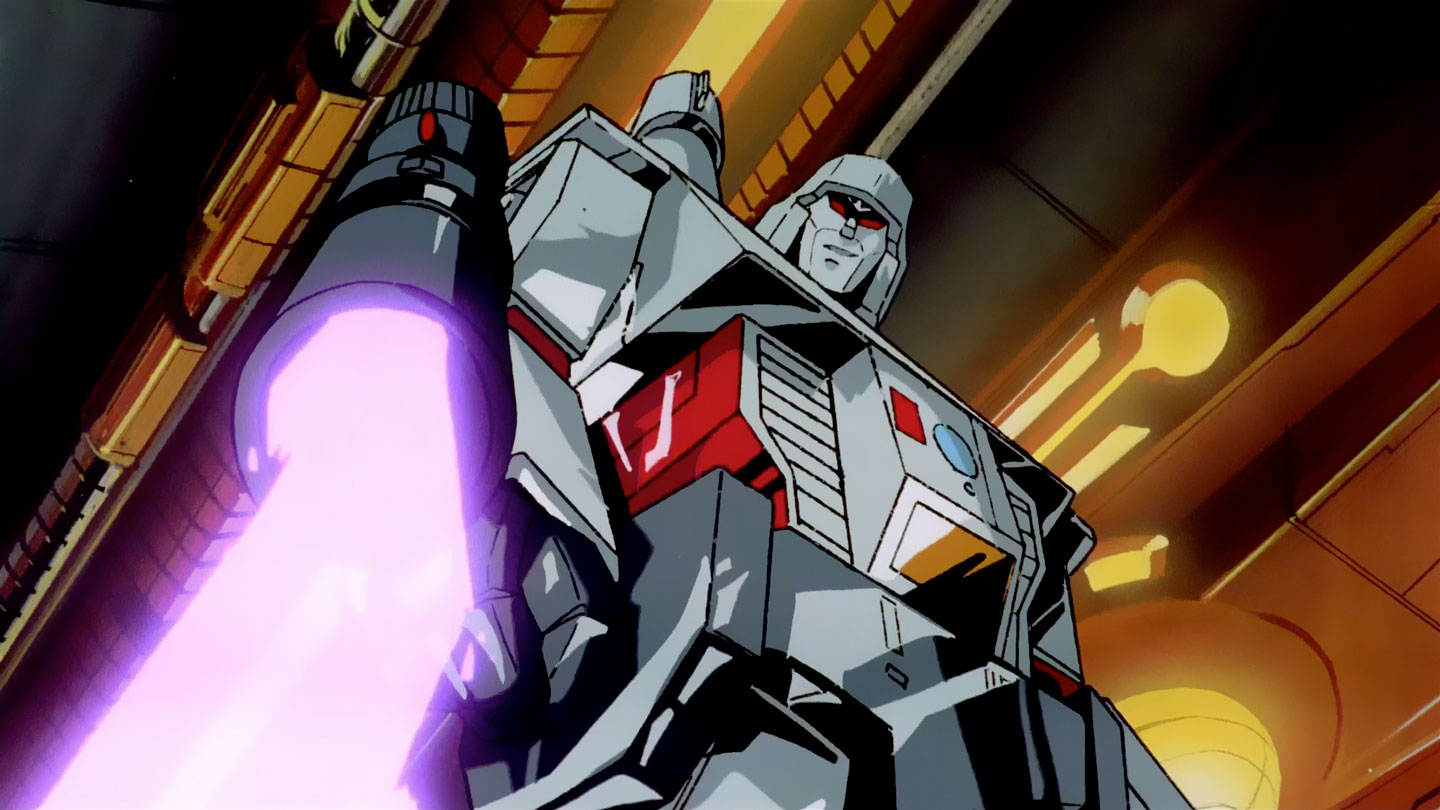 The Transformers movie was released between seasons two and three of the TV show. It functions as a bridge between these seasons which had an abrupt shift in style and tone. The location went from Earth to outer space and the original cast of core characters was almost completely replaced by new ones. Much like how M.A.S.K. suddenly went to a show about racing instead of undercover agents fighting a terrorist organization.

The Transformers movie shows us what happened to all of the original cast and introduces us to new characters who would star in the next two seasons of the show. It does so in the most shocking way it could do. They kill almost all of the old characters. The first fifteen minutes of the Transformers movie are brutal. Fan favorite characters are killed off without the blink of an eye. Ironhide, Windcharger, Wheeljack, Ratchet and Prowl just to name a few. But also Starscream and even both leaders: Optimus Prime and Megatron.

This is a bold choice were it not that it was made purely for financial reasons. As much as I applaud the Marvel Cinematic Universe for finally daring to kill off main characters, it doesn’t feel deserved here. The deaths, except for the one of Optimus Prime, come early and quick. There is hardly any time to mourn these characters because the plot goes into overdrive with a group of new leads. They have to save the planet of Cybertron from Unicron, a planet eating Transformer. 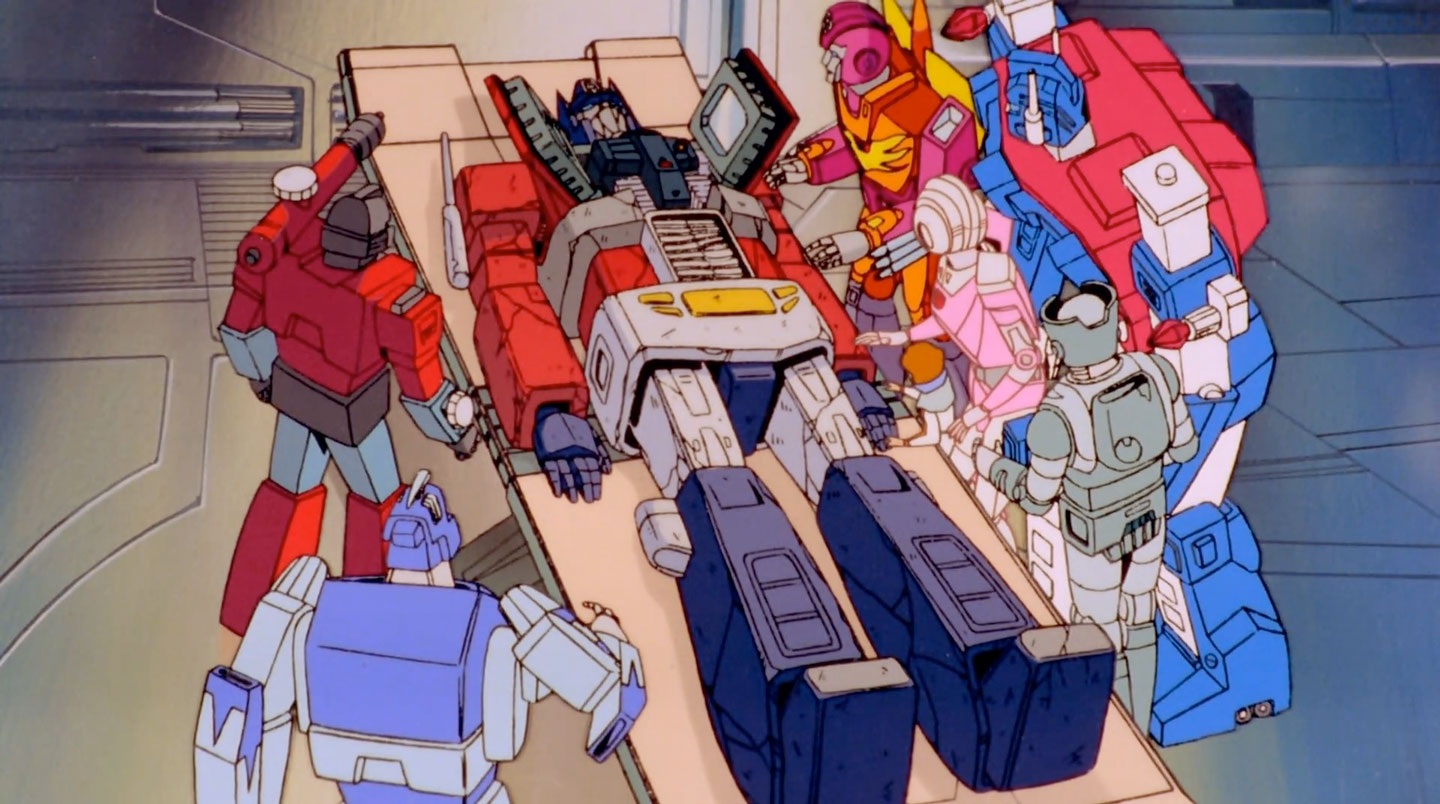 The main story revolves around all of the Transformers chasing after a MacGuffin. The MacGuffin in this case is the Autobot Matrix of Leadership. An electronic glowy thingy that has been residing in the chest of Optimus Prime for all these years apparently. Funny how they never mentioned it in the TV show. Anyway, this is what makes an Autobot a leader. But only of he or she is worthy. And yes, there are now genders when it comes to the Transformers. This movie introduces Arcee, the first Transformer with explicit female features: voice, curves and lips.

This matrix has the ability to stop Unicron but only a worthy Autobot can open it and unleash its power. But before they can find out who their new leader is they will have to escape from the Sharkticons and the planet Junkion. Meanwhile Unicron transforms all of the fatally wounded Decepticons into his slaves. Galvatron, Cyclonus, Scourge and his army of Sweeps. Their mission is to retrieve the Matrix so he can destroy it.

The plot is a bit all over the place and mainly serves to introduce a whole new toy-line to young kids. Instead of Megatron there is now Galvatron while Optimus Prime makes place for Rodimus Prime. There are a lot of new characters introduced in this movie. Aside from the aforementioned ones there are Ultra Magnus, Hot Rod, Kup, Blur, Wheelie and Wreck-Gar just to name a few. This alienates the movie somewhat from the cartoon. 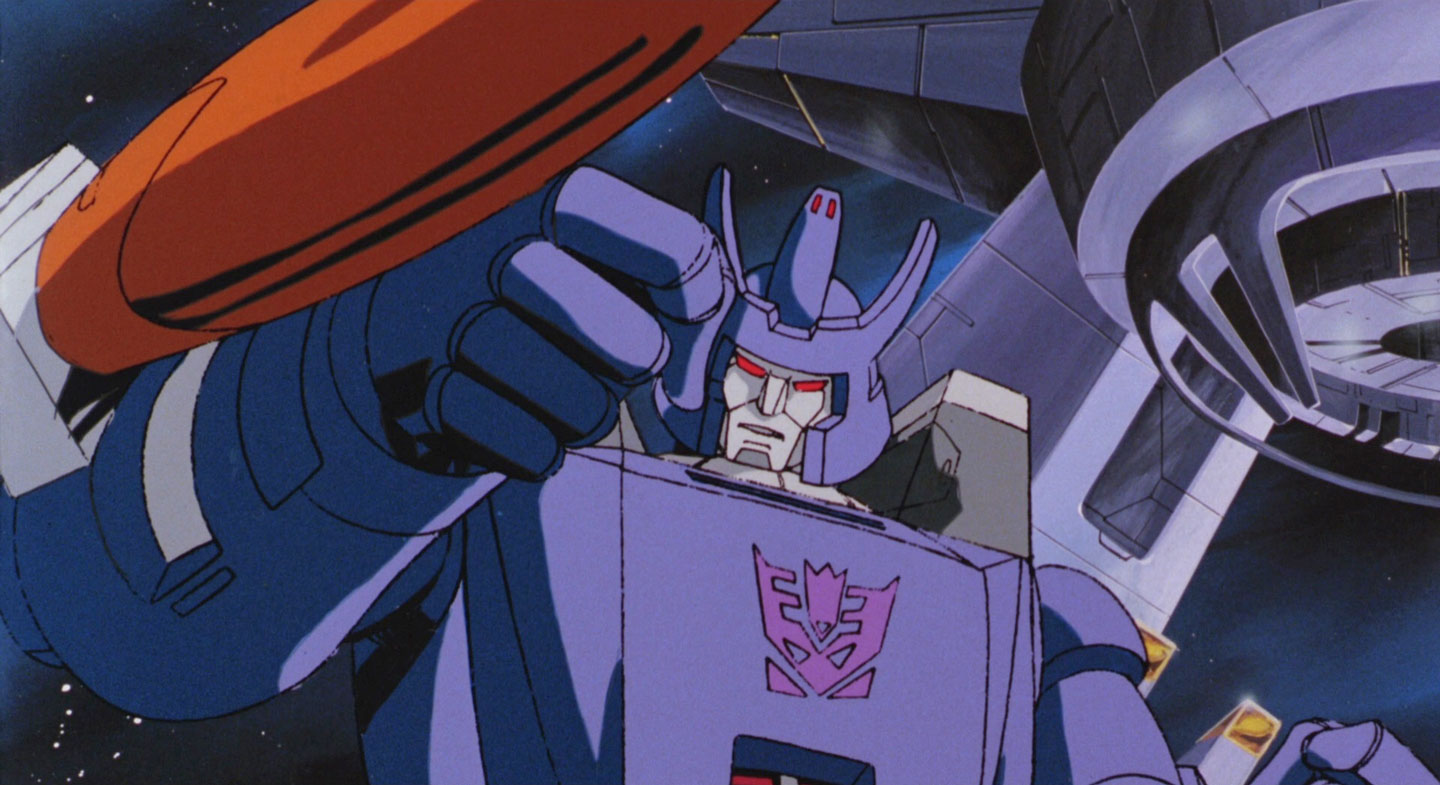 There are also some inconsistencies when it comes to how mortal the Transformers are. All the original characters die by a mere blast while a character like Ultra Magnus is repaired quite easily after being drawn and quartered. Nevertheless this was yet another brutal scene in a movie directed at eight-to-ten year olds. The Transformers movie has scarred people for life. It is basically “Watership Down” but with robots instead of rabbits.

Nevertheless this movie is a pillar of my upbringing and it’s better than “G.I. Joe: The Movie” which was released a year later. The animation is better than in the T.V. show though it does look rough when you compare it to today’s animation. But that’s the same as saying how movies now have much more vibrant colors when comparing it to old black and white movies.

While typing this review I looked up how much a Hot Rod toy costs. The movie apparently still does what it was intended to do. As a movie it’s better than Michael Bay’s live action movies. As a marketing tool it’s flawless.

The Transformers: The Movie