When people mention the Terminator franchise it gives us this image of a big action blockbuster filled with CGI and a lot of pyrotechnics. That’s not without reason as Terminator 2 was basically responsible for kick-starting the use of computers to create near perfect effects on the big screen. With that in mind it’s fun to watch the original Terminator and marvel about how low-scale it actually is. There are effects and there are pyrotechnics, but compared to its sequel this is more a tense thriller than a grand scale special effectstravangza.

In The Terminator an evil cyborg (Arnold Schwarzenegger) returns from 2029 to 1984 to kill the mother of a future resistance leader, Sarah Connor. This is because in 2029 machines have artificial intelligence, set off world war 3 and are hunting down the remaining humans which are led by John Connor. He’s followed by Kyle Reese, a human, who’s mission is to stop him. This is the setup for a 100 minute chase movie, but one with a gimmick: The T-800, as the cyborg is called, is a ruthless killing machine. Impervious to bullets and as Kyle puts it:

It can’t be bargained with. It can’t be reasoned with. It doesn’t feel pity, or remorse, or fear. And it absolutely will not stop, ever, until you are dead.

Of all the Terminator movies this is probably the most tense one, more a thriller than an action movie. The concept of putting a seemingly unstoppable killing machine to kill someone who absolutely has no knowledge of this is the basis of one tense scene after another. The only one who can save her is someone who sounds like a nut job since he’s constantly blabbing about the future and such. Normally it’s annoying when nobody believes the one guy who’s actually right, but in The Terminator it makes perfect sense. Sarah is constantly in doubt but the more see witnesses this “man” getting shot, being dragged under a semi and still come after her she puts two and two together and starts to think that Kyle might not be that crazy after all. Besides, here’s a the one guy who has saved her a couple of times already while the Terminator has shot up an entire police precinct in one of cinema’s most memorable sequences. 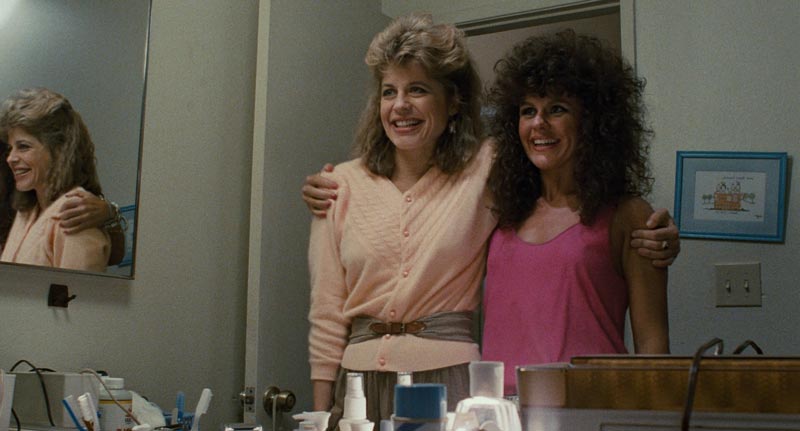 It doesn’t get more 80’s than this

The strength of The Terminator lies in the fact that this movie is man vs. machine and the machine is seemingly more powerful. The sequels neglected that to a certain degree by having Arnold returning as the reprogrammed good guy cyborg who defends the Connor family against even more powerful cyborgs. They became more machine against machine making the odds feel smaller. Therefor they had secondary plots about preventing Word War 3 making the movies more grand scale. The original has a more focused plot.

Being more than 30 years old and made before the CG-revolution it’s sequel was responsible for, there are some clearly aged sequences. Now the practical effects on Schwarzenegger hold up pretty well and even the eye-removal scene is still convincing to a certain degree, but once the Terminator gets trapped in a blaze of fire and his skin is burned off, we are treated to scenes featuring a stop motion Terminator interacting in scenes with the actors. This looks very dated  and, I’m going out on a limb here with my opinion, could very well benefit from adding some CG. Most people hate it that George Lucas constantly tinkers with the original Star Wars trilogy, but I’d rather have Cameron make the effects of the movie better, than yet another reboot or remake.

The Terminator is a good movie that somehow also handles time paradoxes with a certain intelligence. It still holds up relatively well after 30 years story wise but could use some polishing on the effects.