Stepfathers: a subject usually only seen in porn. Taking a cue from all the wicked stepmothers that have tormented many of our childhood fairy-tale heroines, a psychotic stepfather is the subject of a tense 80’s thriller which eventually went on to become somewhat of a slasher-franchise with two sequels. It even got a remake treatment back in 2009 which, like most remakes, was inferior compared to the original. This movie is largely a character study of the a disturbed man looking for the perfect family. His tactic to gain this perfect family is to marry an attractive single woman, often a widow, with one or more kids and be the perfect family you always see on TV. Sadly reality isn’t perfect and neither are families. Therefor the stepfather slowly grows more and more infuriated and frustrated with his family until he reaches a boiling point and simply murders them all. As soon as he starts to realize his current family is imperfect he starts to prepare a new alias in a different town, so that when he does snap he can quickly slip into a new life in a new town and start dating a new single woman with a kid.

The movie opens in a quiet suburban neighborhood and cuts to a guy in the bathroom. He’s covered in blood, but seemingly calm. He starts to shave his beard and replaces his glasses for a set of contacts. He cleans himself in the shower and changes his clothes. Within minutes he looks completely different. He comes out of the bathroom and proceeds to walk downstairs but not before cleaning up a couple of kid’s toys. When descending down the stairs we witness the reason the man was covered in blood: bloody hand prints on the walls and the bodies of a woman and three children on the floor covered in blood. They’re obviously brutally slaughtered. The man puts some more stuff in place and proceeds to the door. As if nothing ever happened he walks down the street. His neighbors don’t even recognize him. Just like that he’s gone, on his way to new victims, and completing the setup for this movie. 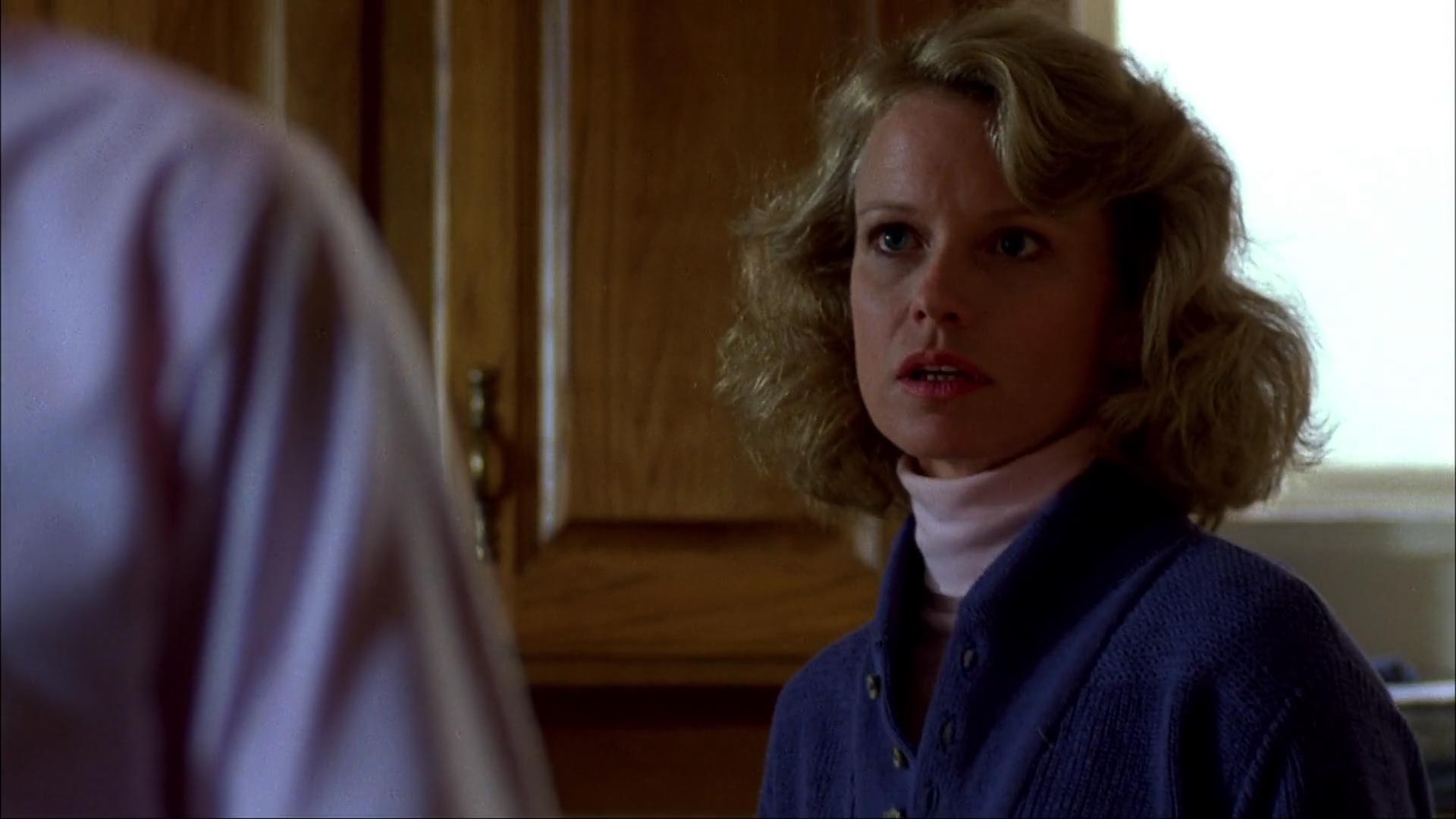 Sadly The Stepfather can’t keep up the quality the opening scene contains. The movie is at it strongest when it revolves around the title character, but lacks when it comes to secondary characters. Most of them have displayed a high level of intelligence, only to come to an end due to their own stupidity. Especially the character of Jim Ogilvie has this problem. He’s set up the entire movie as this pretty smart guy who single–handedly figures out the latest identity of the man that killed his sister in the opening scene. But when he finally figures out where he is, instead of saving the day, he’s stabbed to death by the Stepfather. Apparently bringing a gun to a knife fight will not always work out for you.

He isn’t the only one who makes sloppy mistakes. His stepdaughter, who is actually named “Stephanie”, is suspicious of the current father figure in her life, especially after seeing him throw a tantrum in the basement and reading an article about the murdered family from the opening scene. She mails the newspaper requesting a photo of the murderer, but instead of using a friend’s address as a return address she uses her own. Well guess who intercepts the picture they sent her and replaces it with another?
The freedom of the stepfather depends a lot on the stupidity of others. The police aren’t really looking into the case, and everybody else makes all of these mistakes that simply could have been avoided. My guess is that in reality, they would have caught him within a month…

But despite these character flaws, the movie overall holds up pretty well. The pacing is good, the acting overall decent but with a standout performance by Terry O’Quinn. He nails his performance and gives his character much needed depth. In many occasions we get to see a close up of his face when is slowly losing it. O’Quinn gives his character all sorts of little ticks without overdoing it. This could have been an over the top cheesy performance so easily, but O’Quinn creates a believable and memorable character. The Stepfather is a good thriller with an interesting plot, even though it needs several holes in the story in order to even exist.

If you have never seen this movie, chances are you probably want to now, and you should, because this is a classic 80’s thriller. It’s not a perfect movie, the plot holes are too massive for that, but it’s still a good movie with a great performance by Terry O’Quinn. Considering the fact that knives are the stepfather’s preferred weapon of choice, the movie might have well been called “The Stabfather”