Of all the movies Russ Meyer made The Seven Minutes must be the one which is played the most straight. Even during his roughie period when he made movies like Lorna there was always time for some playful exploitation, but not so here. The Seven Minutes is mostly a courtroom drama leaving little room for Meyer to include his trademark breast-centered shots. As much as the poster promises with a tagline that goes like “An explosive film about a banned book, a rape, and a trial that tore a town apart!” so little does it deliver… in fact only the trial part might be true about that line.

The title refers to a raunchy book which is banned in several countries. After a teenager who purchased the book is charged with rape, an eager prosecutor with an anti-pornography moral and who’s preparing for an upcoming election uses the scandal to declare the book as obscene. He sets up a sting operation where two detectives (one played by Meyer regular Charles Napier) enter a bookstore, purchase a copy of the eponymous book, whereupon the prosecutor brings charges against the bookstore clerk for selling obscene material. The subsequent trial revolves around the issue of pornography vs. free speech. Young defense lawyer Mike Barrett (Wayne Maunder) must not only defend the clerk charged with selling the book but also solve the mystery of the novel’s true author.

The first shot in the Seven Minutes is that of a young big breasted girl wearing a short skirt running down the street with a German Shepherd. Her bouncing boobies and carefree smile gives one the impression that this might be a movie we have come to expect from Russ Meyer; attractive well-endowed young women, a flimsy story with a sexual element, gratuitous nudity and some cartoonish elements. But The Seven Minutes only has a couple of those elements during the first act of the movie when things are set up that will lead to the trial. The young girl in the opening scene turns out to be a secretary of one of the key-players and has a walk-on role in several scenes with the sole reason to titillate. There are a couple of older men who help and support the prosecutor to ban the book, but they have this young girl constantly around them who has no function. It’s a Meyer trademark as she’s one of those care-free girls who just like to have some fun, but her being there feels kind of dirty.

As soon as the trial begins there seems to be no more room for Meyer’s usual ingredients as he plays it rather straight for the remainder of the movie. There are no provocatively dressed women called to the stand, there are no winks thrown at the audience. What we are presented with is a trial about nothing more than the banning of a book. This is rather surprising as there are two people arrested during the first act; the guy who supposedly raped a woman after reading The Seven Minutes and the bookstore clerk who sold the book to a plain clothes detective. Both are called as witnesses but the movie is never about them and their situation directly, though if the book isn’t banned the clerk gets off. Meyer has always presented rape as a mere inconvenience in most of his movies it’s featured in and reinforces that idea by having a rape in the movie and moving it to the background as if some raunchy deemed book is apparently more important than a violent attack on a woman. 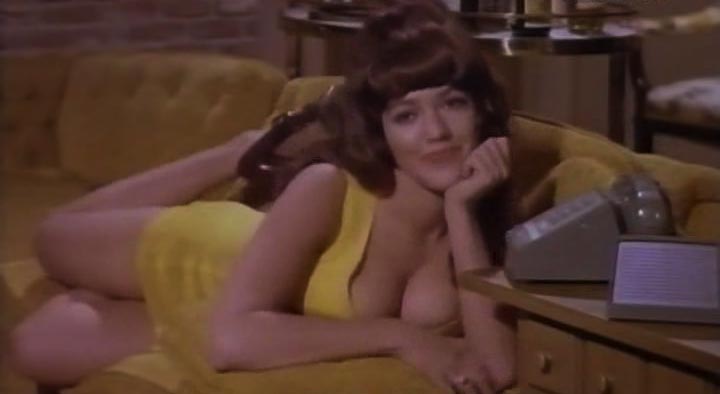 The Seven Minutes displays Meyer’s weakness: his style of movie making is great for his over-the-top skin-flicks but doesn’t suite a court-room drama. The trial is never that interesting and the subject of the trial, banning a book in just one state in America, doesn’t present the audience with a suspenseful situation where the fate of the world lies in the hand of one man for instance. It could have been more captivating if this was a movie about the rape, but at the end it’s only revealed that the guy who supposedly raped the young girl is impotent so he couldn’t have done it and that’s that. The guy that actually did it walks free.

I noted how Meyer’s previous movie “Beyond the Valley of the Dolls” had this enormous cast, which was refreshing because movies by Russ Meyer are usually shot on a low budget allowing only a small cast. This being another studio movie, Meyer has a rather large cast on display here, including a young Tom Selleck. The problem is that there are just too many characters in this movie and it all is very confusing to keep track of who’s who and what their function is to the plot.

With a director like Meyer I think it would have been a better choice if he filmed the book featured in the movie, rather than a movie about the book. By the sound of it, it seems like it would be an ideal basis for a Russ Meyer movie. It can appreciate it how he’s trying  something different, but this script isn’t just right for him and I don’t think other directors could have made it much better without extensive re-writes. The movie is just too crowded with characters and the prosecutor isn’t a convincing “villain”. He’s just a guy doing his job and trying to enforce his crusade against pornography, something which some people still do today. I certainly don’t share their beliefs, but they’re not bad people just because they want a book banned. They’re just stupid and overtly religious in most cases.

The Seven Minutes is one of Meyer’s more boring pictures. The movie only has glimpses of Meyer’s trademarks and it’s those rare moments that make up the enjoyable parts of the movie.