Nudity and Hollywood have always had a troubled relationship. Nowadays movie studios go to great lengths to ensure that their target audience is a large as possible. Since inclusion of nudity almost automatically gives movies an R-rating at least, allowing only adults to attend the movie in theaters, it has become the standard to tease nudity but not show it. This is also the time that any 14 year old can surf to PornHub and watch the most hardcore pornography you can imagine. That was different just two decades ago, when certain scenes in movies would be labeled as most paused moments, because they consisted of nudity: Phoebe Cates taking off her bikini in Fast Times at Ridgemont High, Sharon Stone flashing her privates in Basic Instinct. There was a time nudity wasn’t allowed in movies and the only way people would get to see some nudity on screen were documentaries about nudism and sexual education. The Immoral Mr. Teas was the first movie that contained gratuitous nudity without a either a natural or informative context. It gave birth to the nudie-cutie genre and the career of Russ Meyer.

The titular Mr. Teas is a door to door salesman for dentists’ appliances. Everywhere he goes he encounters beautiful, revealingly dressed, big breasted women. They stir his interest, but the guy is a bit of a goof and doesn’t know how to score with these women. When he’s sitting on a tree branch fishing and an attractive young woman comes to sit besides him for some topless sunbathing his immediate response it to jump into the water and swim away. At one point he even visits a prostitute who ends up just ironing his work clothes. After a dentist appointment the analgesics used on Mr. Teas have a side-effect, triggering vivid imaginations of the women he encounters centering around nudity. 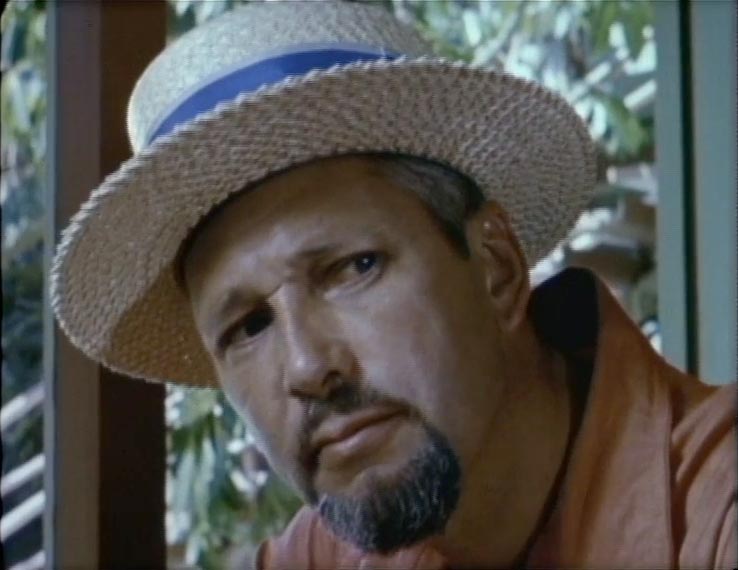 The Immoral Mr. Teas is basically a silent movie. While there’s is dialogue visible on screen, the original audio track has been removed and replaced by music and a narrator commenting about life of the modern man and general trivia supposedly related to the things occurring on screen. When a woman is swinging in a tire-swing we’re informed about the discovery of rubber, when women are washing themselves in a lake our habits of washing are explained. It’s kind of strange but the documentary approach has probably to do with the fact that nudity was only allowed in documentaries before this. Here’s a quote taken from the movie and an example of the educational elements of The Immoral Mr. Teas:

The density of water is 64.4 pounds per cubic foot. Water was one of the more important means of earlier transportation. The sea has for years fascinated the roving instincts in man. All kinds of cargo can be shipped by water. In fact, the United States exports more tonnage per year than any other country.

And we’re informed by this as we’re watching three naked women rowing in a boat on a lake.

Looking at it now it’s hard to imagine the boundaries being pushed here. The Immoral Mr. Teas possesses a certain charm and it’s all quite tame actually. For the first 30 minutes, which is half the movie as it has a running time of 62 minutes, it’s all teasing as Mr. Teas encounters plenty of well endowed women, but other than some side-boob nothing is shown. They make up for that the second half when Teas’ fantasies become more explicit and feature naked women in both surrealistic and realistic environments. The final 15 minutes alone consists of three girls Teas encountered earlier going to a lake, sunbathing and skinny dipping. The nudity itself is rather tame as well; only boobs and butts are shown. 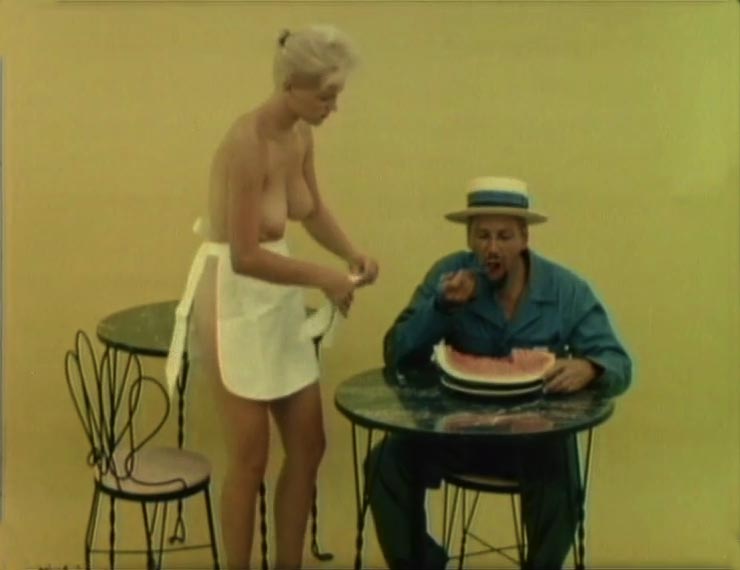 One of the charming aspects is the outdoor city setting of some scenes. They create a certain sense of nostalgia. It’s fun to see those old cars, buses and bikes in a picture that is a bit over-saturated making it look as if I’m looking at old postcards.

Even with a running time of 62 minutes the movie drags. That’s because there’s basically no plot to the movie. It’s just a series of vignettes about a peeping Tom who loves to spy on girls. And how is that immoral? When it comes down to beautiful naked women, every heterosexual male loves to have a glimpse. This being his first movie it lacks a lot of the Russ Meyer trademarks shown in his later work, but he already displays here that he has a love for big breasted women and the use of narration his movies.

The Immoral Mr. Teas is a movie that has a great legacy, but itself is not that good of a movie. Still, it broke barriers and paved the way for nudity in regular movies. So think about it: whenever a girl in a movie takes her top off for no reason, you have Russ Meyer and The Immoral Mr. Teas to thank for it.