After Under Siege 2 Steven Seagal’s star was slowly fading. Something that begun with On Deadly Ground. In 1996 a movie with Seagal’s name above the title wouldn’t automatically become a box office success. He was becoming yesterday’s news with his limited acting range and rather repetitious output. So he needed to reinvent himself should he want to keep being relevant.

The previous year the movie Seven did very well at the box-office. Since Seagal has been playing cops in almost all of his movies pitting him against a serial killer was the next logical step. To kill two birds with one stone they also made it a buddy-cop movie. The result is The Glimmer Man starring Keenen Ivory Wayans as the fast-mouthed partner of Seagal. It’s a long way down from Morgan Freeman and Brad Pitt, but at least there is more ass-kicking! 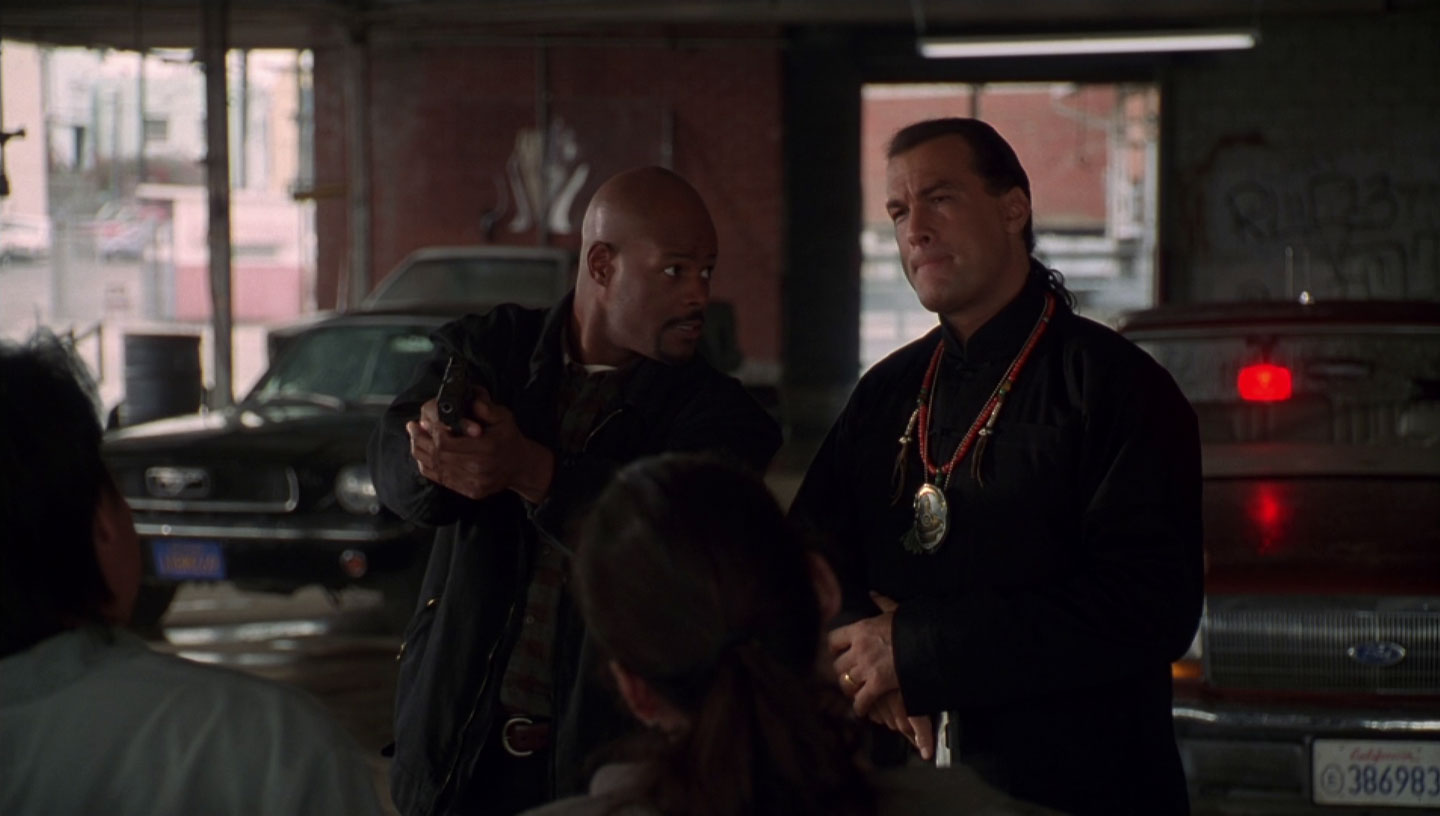 Situated in LA, this movie has got the worst rainstorms since the movie it copies: Seven. A serial killer is targeting catholic families and crucifying them in their houses. On the case are Lt. Jack Cole (Seagal) and Det. Jim Campbell (Wayans). Cole just came over from New York where he solved another serial killer case. He also has a shadowy past as do most of Seagal’s characters. It soon becomes clear that there’s a copycat killer using the MO of the real serial killer.Before you know it they’re trying to solve two cases.

This movie is the one where Seagal starts getting annoying. He pushes his personal philosophies and views on life into the movie. He’s walking around in Asian jackets and wearing love beads. Halfway in the movie Seagal’s wardrobe goes back to plain black. Guess someone on the set pointed out that his costumes look more funny than serious. There are quite a few jokes about the beads and the clothing by other characters in the movie. It made me wonder if they wrote those in last minute or that his character was always written as this. 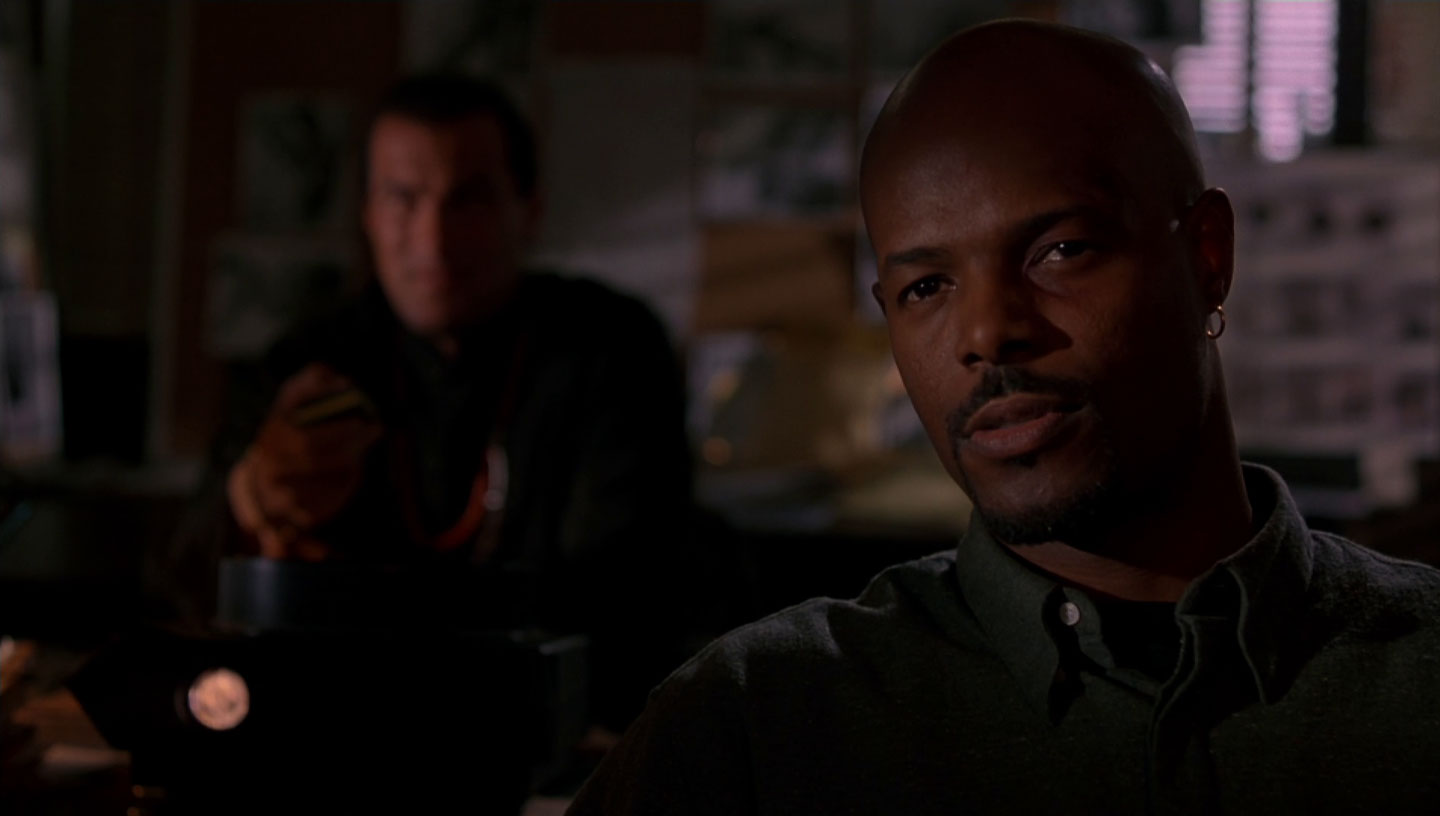 Early in the movie he also visits a Chinese herb store. The most surprising aspect of this scene is how the store isn’t being robbed so Seagal can show off his martial arts. This scene functions to show off other aspects of Seagal. In this case how he speaks Chinese and knows a lot about herbs and such. This scene also sets the basis for a recurring joke about Powdered Deer Penis and how the antlers are good for one’s manhood.

Somehow the buddy-cop thing does work for The Glimmer Man. Seagal had buddies or partners in earlier movies but they always played second fiddle like Keith David in Marked For Death or the puppy in Out For Justice. Wayans is equal to Seagal in terms of character and screen time. His function is mostly to spout one-liners and other remarks. He makes the movie more fun to watch. But by implementing his character as a wise-ass they do lose the grittiness they were initially going for with the serial killer storyline and the heavy rain. 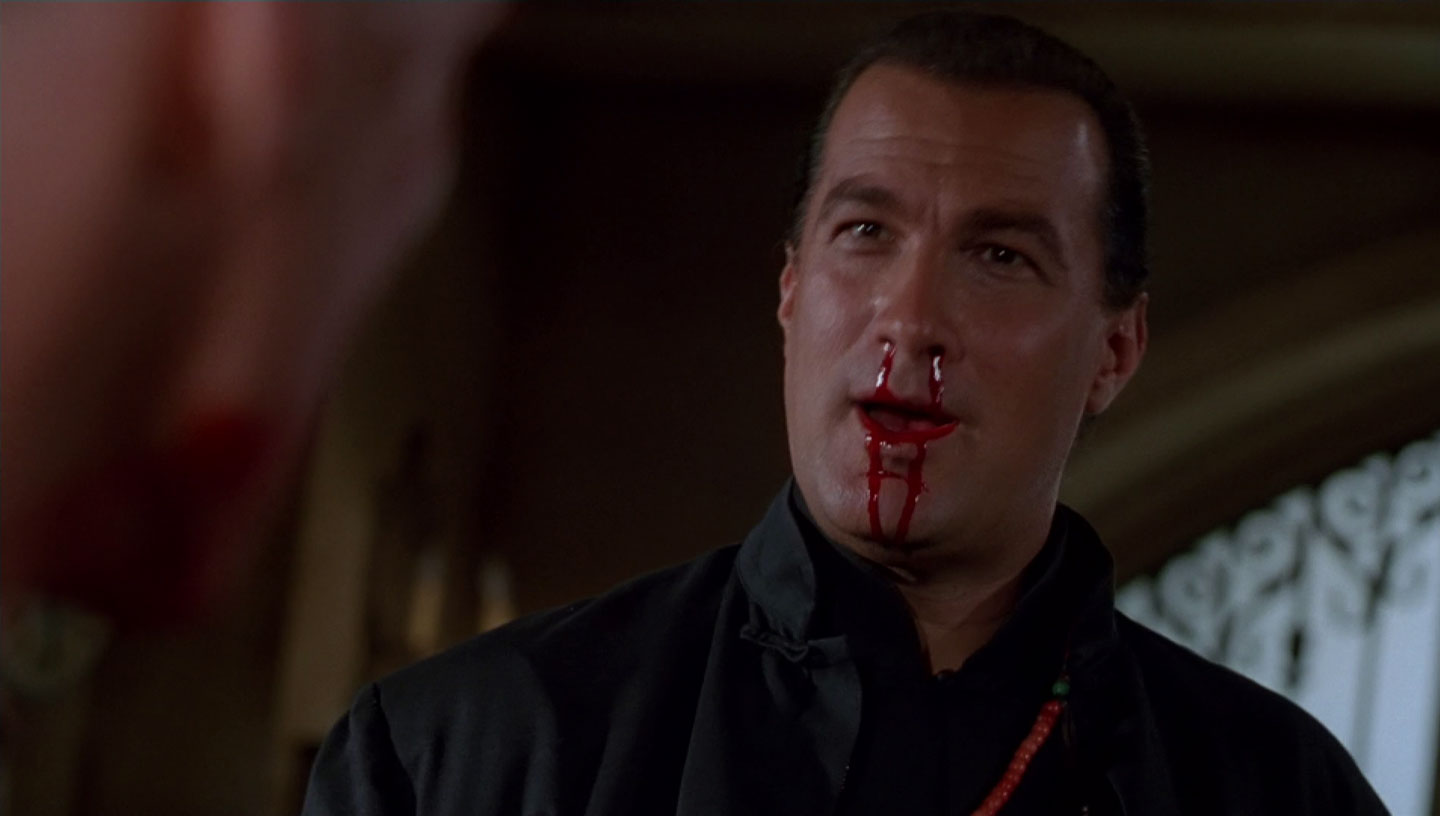 Cool, symmetric bleeding! How bad ass is that?

Now the title might seem to refer to the serial killer. It has an ominous ring to it. But the title actually refers to Seagal’s character. This makes The Glimmer Man one of those Seagal movies you can put “Steven Seagal is” in front of. Now you might be wondering what a “Glimmer Man” is. Let me explain by using the words of a high-ranked CIA official in the movie:

“Suffice to say, to the people he hunted for us, he was known as the Glimmer Man. There’d be nothing but jungle, then a glimmer… Then you’d be dead!”

Now I wonder, how the fuck does a story like that spread? It’s not that people get to write that down in their diary. “Their journal, I just saw a glimmer…” Bang! No more entries in the diary. My guess is that Cole made that one up himself or maybe he let one live after generating the glimmer. Which makes me wonder: how did he generate the glimmer? Is he a superhero? 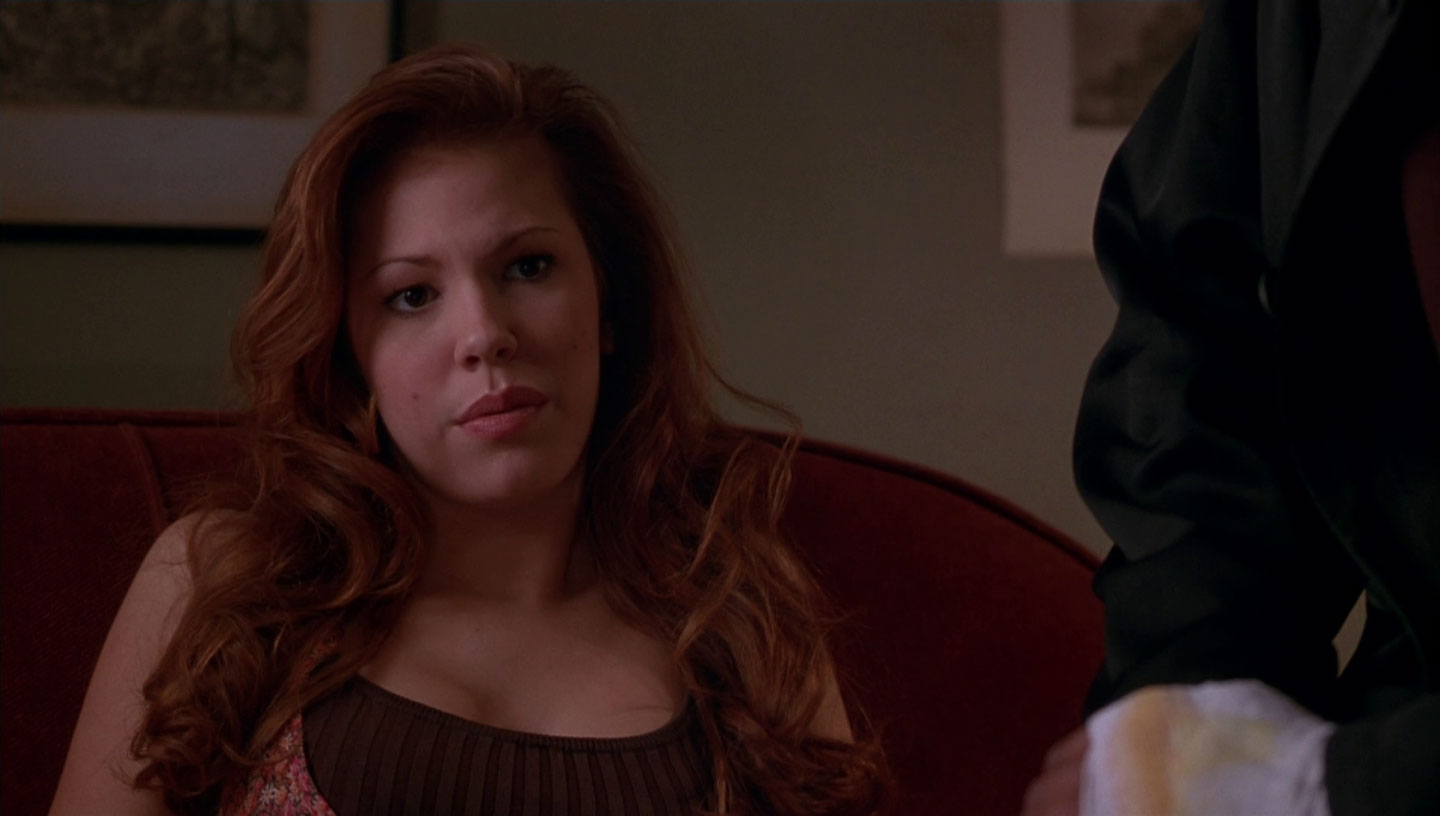 What is always fun are those before-they-were-famous roles. In The Glimmer Man there are two scenes featuring Nikky Cox. Whom you might know as the extremely hot daughter from Unhappily Ever After, the self-titled show Nikky and/or Las Vegas. She plays a student and does nothing special but it is fun to see here before she went on to do her signature roles. She doesn’t show off her assets like she would do later on in her career. Bummer.

One thing people come to see in a Seagal movie are the fight scenes. In The Glimmer Man they’re are less flashy than usual. There is one quite noteworthy sequence in a restaurant in which Seagal actually almost gets beaten up. Since he has become superhuman in his last few movies that is quite surprising. Most of the time nobody is able to lay a hand on him. 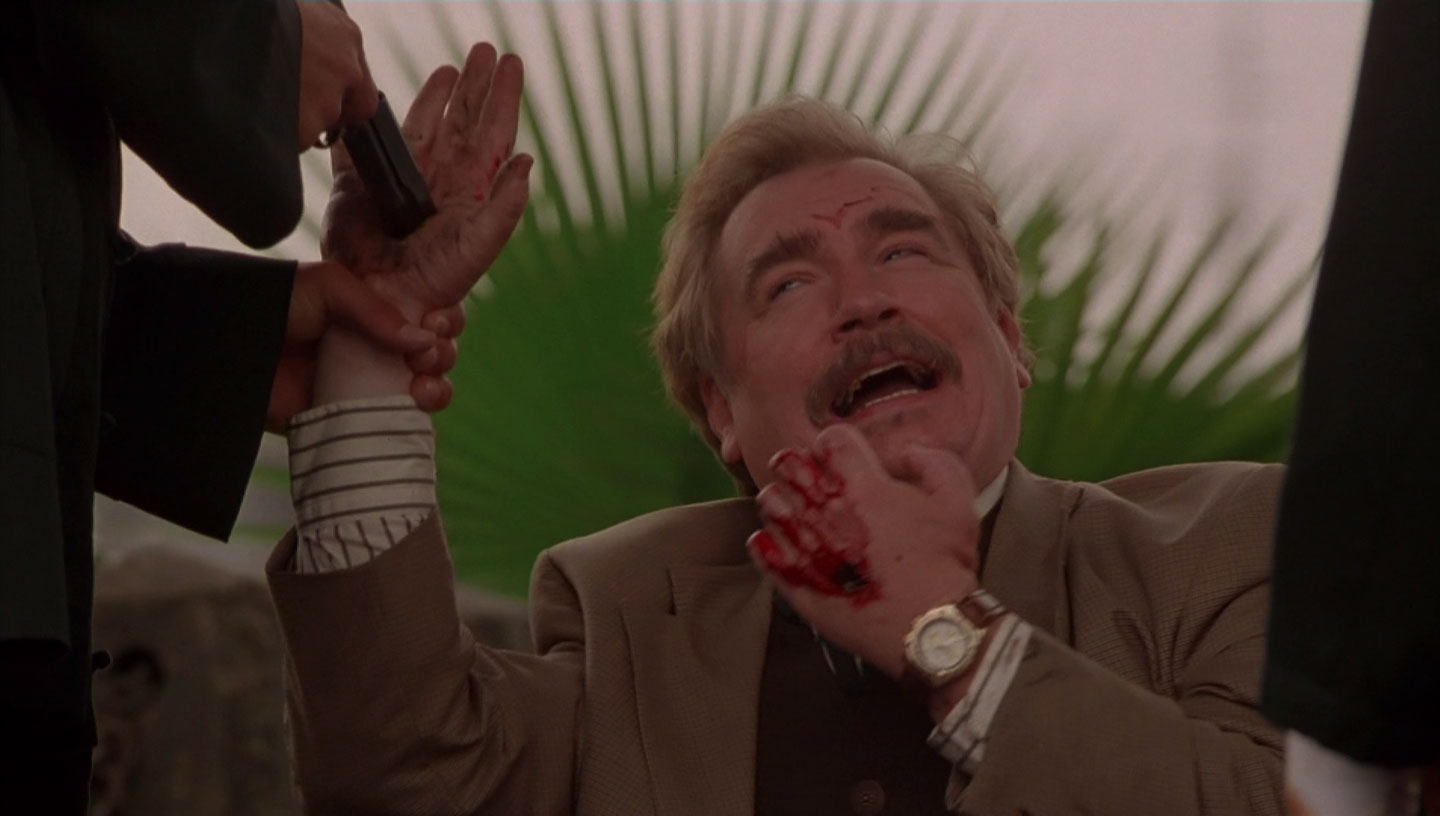 Even the “final boss”, to use a gaming term, gets and takes the opportunity to make Seagal bleed. That final showdown reminded me a bit of the fight with Screwface in Marked For Death. Seagal is not as rage filled as he was in Marked For Death. Even though this guy killed his ex-wife while Screwface was only responsible for shooting Seagal’s niece. He probably hated his ex-wife I guess.

I always thought The Glimmer Man was one of the lesser Seagal movies, but that was before he started starring in tons of crappy straight to DVD movies. I actually like this movie now more because I automatically compare it to all these abysmal movies released the last couple of years. The Glimmer Man is a poor man’s action version of Seven and nothing more. But it’s mildly entertaining.