Full disclosure: this movie came out in the Netherlands when The Garbage Pail Kids were at the height of their popularity. Everybody was collecting these gross out trading cards and when the choice for a movie viewing on school came, many fingers pointed to The Garbage Pail Kids Movie. At the age of 10 there was no such thing as a bad movie. I was ecstatic to see these trading cards come to life on the small screen of a television in a small auditorium. But compared to movies like The Goonies and Ghostbusters, both youth favorites, I did feel something was off with this movie.

Watching this movie as an adult is quite a different experience. That feeling I had is really obvious now and its easy to see why this movie has such a low score with critics and audiences. It’s a terrible movie. One the fits perfectly in the pantheon of terrible 80s and 90s pop culture based movies. Right there next to Masters of The Universe and Howard the Duck.

The Garbage Pail Kids Movie would have probably worked better as an animated movie rather than a live action movie. Movies like these tend to be made on small budgets which doesn’t allow for the scope the source material requires. That’s why both He-Man and Howard the Duck end up on Earth instead of on their own fantastical worlds. The Garbage Pail Kids Movie takes the same approach as the kids are shown to come from outer space, but end up on Earth to have their adventure. 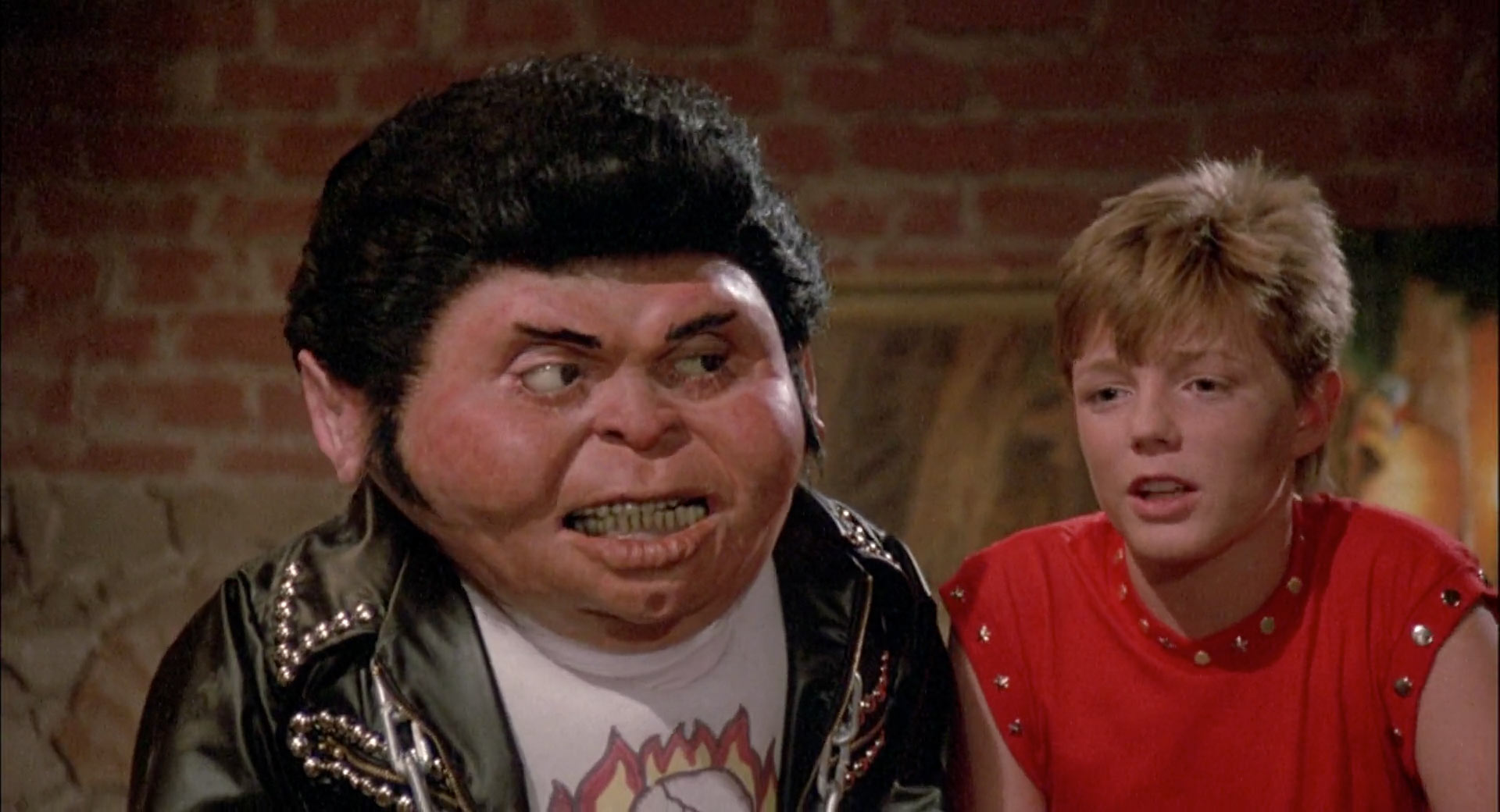 To give the writers some slack: they didn’t have much to go on. After all, these characters were limited to a picture on a trading card. There is no Garbage Pail Kids mythology. They look like gross versions of the Cabbage Patch Kids, that’s it. Oh and there’s the word trashcan in the title so the writers simply chose to keep them captive in a garbage can in the first act.

But somehow the movie turned out to be about 14 year old Dodger, who works at an antique store for Captain Manzini. An older man who seems to be able to wield magic. This movie employs the construct of an older man being best friends with a pubescent boy. While this works for Marty and Doc in Back To The Future, it comes off a bit creepy in The Garbage Pail Kids Movie.

Dodger is in love with the older Tangerine. A girl who aspires to be a fashion designer and who hangs out with a group of bullies that constantly harass Dodger. They seem to be in their mid to late 20s, so them bullying a 14 year old kid feels weird. One day Dodger accidentally kicks over a garbage can containing a couple of weird man-like creatures who look like little people wearing giant animatronic heads: They are the Garbage Pail Kids and each of them contains a unique gross feature.

But their true superpower is the ability to be great at making clothes. In order to get close to Tangerine, Dodger has the kids make all her clothes for her so she can have her own fashion show in a local department store. The first step to become a world renowned fashion designer. The sexy Tangerine is of course just using Dodger and the ugly Garbage Pail Kids for her own personal gain. The movie is force feeding us the message about how true beauty comes from the inside and not the outside.

A movie that starts with 7 kids traveling through space in a garbage can ends up at a fashion show. Quite the anti-climax. In between there are some notable excursions to places like the typical 80s biker bar and the “State Home For The Ugly” which is the one of the silliest and least convincing sets I have seen in a movie. 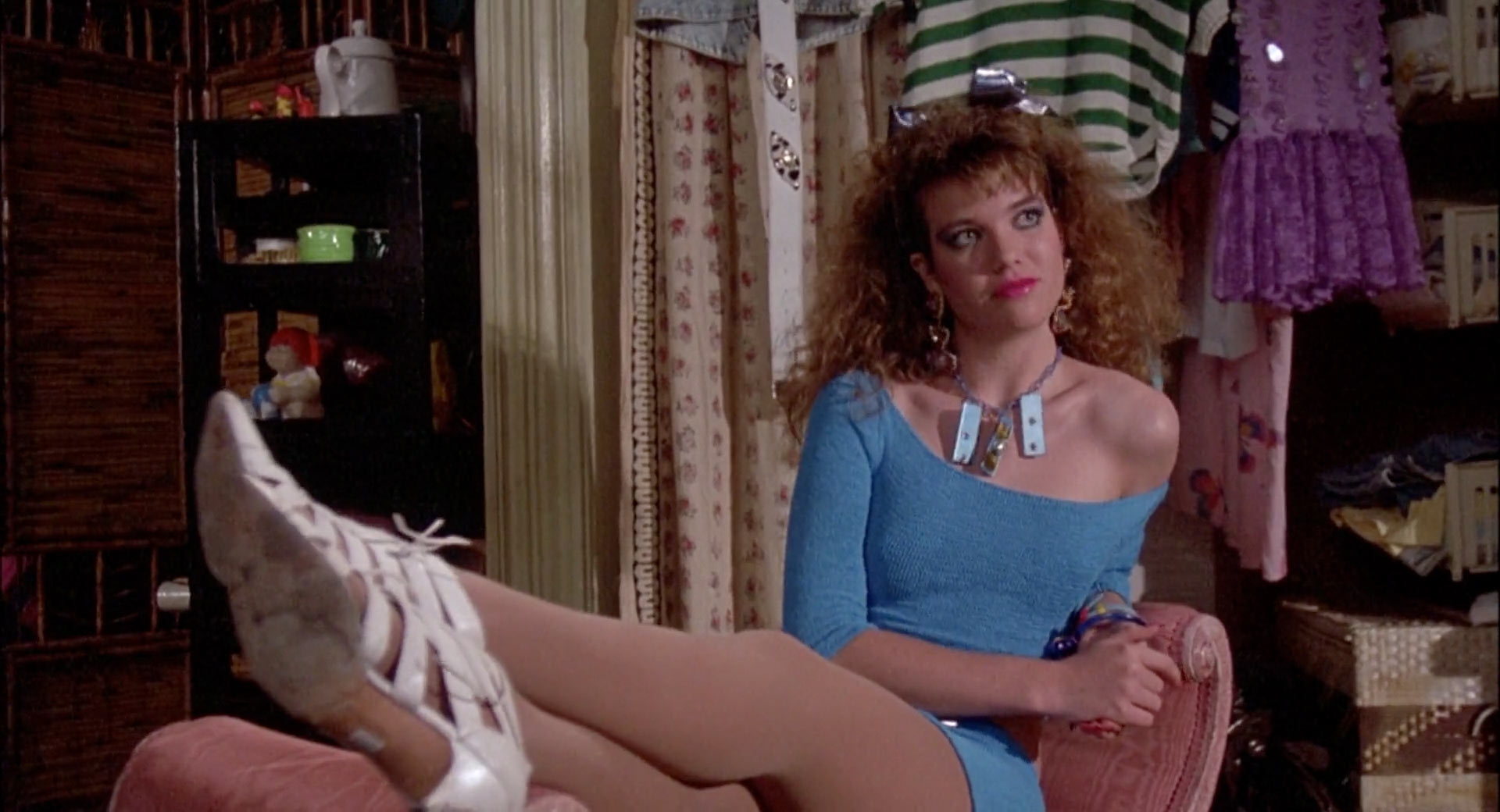 Going against the Hollywood standard of casting 20-somethings as teenagers, then 13 year old Mackenzie Astin stars as 14 year old Dodger. The object of affection, Tangerine, is played by Katie Barberi who is only 9 months older than Astin. This makes her 14 or 15 at the time of filming. While her age is never mentioned she’s portrayed as a young woman somewhere between the ages of 18 and 22. She lives on her own, is world weary, makes a living in designing, creating and selling clothes, has a boyfriend who is in his late 20s, drives a car and uses her sexuality to get things from men.

Nobody noticed this at the time, simply because sites like IMDB were not around and they go out of their way to make Barberi look and act like an adult. But knowing this it’s kind of awkward how much the movie sexualizes a 15 year old girl. She struts around in short skirts seducing Dodger by basically doing a Basic Instinct in one scene. In another she stuns him by taking her shirt off in front of him while wearing a partially see through bra. Simply put: Barberi is pure jail-bait in this movie.

But the main attraction are the Garbage Pail Kids themselves. They’re also one of the movie’s weakest links. They’re portrayed by little people wearing gloves and giant frightening animatronic heads. One of the appeals of the trading cards was the cutesy-factor of the kids in the illustrations combined with the gross out and offending stuff. It was the combination of the two that made these cards one of the defining fads of the 80s.

The faces of the kids are the stuff of nightmares and the technology behind them insufficient to bring them to life. All of the voice work from the characters is ADR. Often the kids say something while their mouths aren’t moving. Only during close-ups do they try to mimic the mouth movements to the dialogue we hear. As soon as a shot is wide, no effort is being done to convey that they are actually talking.

To make things worse there are several scenes in which you can clearly see the end of the mask or gloves and the actor’s skin underneath it. This is mostly notable in several scenes with Ali Gator.

The Garbage Pail Kids Movie is one of those legendary terrible classic movies. But it’s sadly not terrible in a hilarious way. It’s a movie for kids. Or to be more specific: a movie for kids in the 1980s. I don’t see how this movie will appeal to anyone today aside from men with a thing for lolitas. It’s hard to see how it did appeal to kids back then, though it manage to do somewhat. I still remember rewinding the tape over and over again trying to write down the lyrics to the catchy song “Working With Each Other”. One of the few highlights in the movie. Nowadays you can just find the lyrics online.

How times have changed.