Movies about car races are rarely actually about car races. Often the race is just a means to an end, a plot device to give a movie a finale in which at least one protagonist and antagonist are pitted against each other. Sometimes the actual race takes up less than a third of the running time. When it does take up more time than that, these movies often revolve around drivers sabotaging each other rather than actual racing. The reason behind this: seeing someone drive a car for an hour just doesn’t make up for interesting movie making. The classic movie The Cannonball Run is such a movie. In this movie several colorful characters, often driving even more colorful vehicles, compete in a race taking place somewhere in central America. Almost all of the contestants use some sort of disguise to protect themselves from being caught by the police, who are actually aware of the race taking place. Some of the contestants do a better than job than others, because who are you trying to fool when you’re driving a Lamborghini or a Ferrari?

Watching The Cannonball Run I never had the feeling I was watching a movie, but rather series of sketches. The movie constantly goes switches from car to car, each engaging in their own hi-jinx in order to win the race, often repeating a certain gag. A young Jackie Chan plays a stereotypical Asian scientist driving around in a car that would almost make K.I.T.T. look outdated (at the time) and Adrienne Barbeau and Tara Buckman play a couple of busty chicks driving a Lamborghini. They constantly get pulled over but simply get off the hook by showing their cleavage. Cleavage is actually a recurring element in this movie, as not only those two girls incorporate it in almost every scene, but other women in the cast display their assets as well. Farah Fawcett doesn’t even wear a bra throughout the movie. My guess is that the Cannonball in the title is referring to boobs. 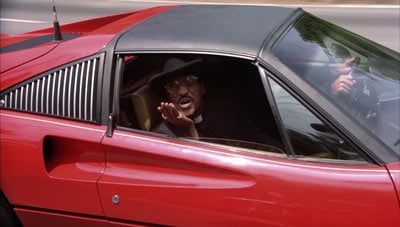 I have seen this movie before, but that would be somewhere in the 90’s. I had fond memories of it, though I didn’t remember much of it aside from Sammy Davis Jr. playing a priest driving a Ferrari and of course the Lamborghini girls. Then again every man who watched this movie as a teenager probably remembers the Lamborghini girls.
I also recall finding Dom DeLouise annoying at the time and not surprisingly I still find him an irritating presence. Having it watched just recently it’s sad to say this movie hasn’t aged well. Aside from the pretty girls and the now classic exotic cars The Cannonball Run hasn’t got a lot to offer in terms of excitement and humor. Though Roger Moore playing a guy posing as Roger Moore or something, they call him Seymour and he has a different girl with him in every scene, was rather funny.

The Cannonball Run isn’t the 80’s classic I expected it to be. There are some fun scenes, but the only interesting parts of the movie were the ones which revolved around sexy women showing their curves. If you’re a classic car enthusiast, you might find this movie more interesting than I did, but if you are than you’ve probably watched this movie already.