The Arena is a mashup of two genres: the swords and sandals genre and the chicks in chains movies. Instead of escaping from a prison located in some remote country, this movie has sexy ladies being enslaved by Romans who are eventually trained as gladiators so that they can compete in fights to the death. As is usual in this genre the third act of the movie revolves around an escape. Shot on a low budget, this small movie has two redeeming factors keeping it from venturing in the realm of the forgotten. Two names that will appeal to most genre fans: Roger Corman and Pam Grier.

The Arena starts off with Roman soldiers taking women with different social backgrounds and cultures captive and selling them as slaves. Because the Roman Empire is so big and the Romans apparently also have invented some really fast way to transport the slaves they are a diverse bunch. Most notably the Viking Bodicia (Margaret Markov) and the African tribes girl Mamawi (Pam Grier). Then again historical accuracy isn’t this movie’s strongest point which actually features women with make-up. Come to think of it, I probably should be glad this movie doesn’t have modern day technology visible in the background like Hercules In New York had. All of the shots taking place on Mount Olympus in that movie has traffic noise in the background.

Because the people of Rome are bored with Gladiator fights by men, someone suggests to have women do these fights. Beautiful women in skimpy clothes who don’t have any fighting skills. Nothing a few hours of training can’t change. And so these slaves learn how to fight each other. But, not surprisingly, they eventually join forces and take on an entire army together to free themselves.

The Arena is a pure and simple exploitation movie. Every ten minutes or so there’s gratuitous nudity. Breasts bouncing around and butt-shots for no other reason than to titillate. Instead of the usual shower scene seen in the prison movies The Arena features a scene in which all the slaves must take off their clothes to be washed. A scene which reminds the viewer that shaving wasn’t a trend yet in the 70s.

Both Pam Grier and Margaret Markov already have their share of exploitation movies on their resume. Especially Grier shows more in this movie than in other movies*. It’s one of the few things that makes this silly little movie watchable. Because it’s made by the numbers there’s nothing here that’s worth mentioning. Despite the change of scenery. This is Pam Grier’s last true exploitation movie before venturing into the genre that truly made her an icon: Blaxploitation. 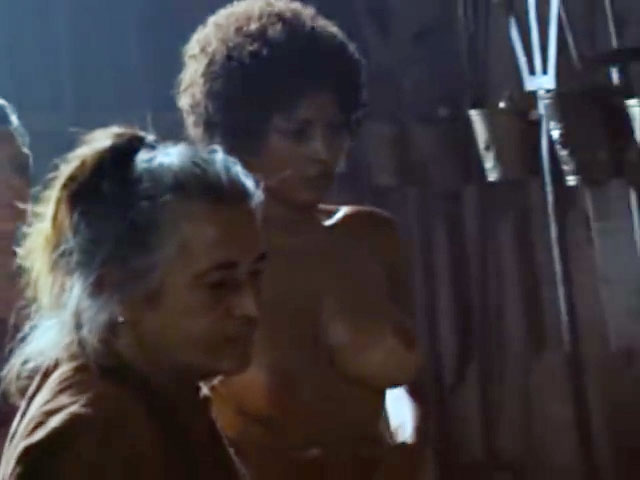 The Arena also features some bad dubbing. This is kind of annoying and therefor makes it hard to judge performances. But to be honest, most performances are flat, uninspired and dull. Aside from maybe Sid Lawrence who plays a flamboyant gay character in a period when there probably was no such thing as flamboyant behavior. Even Pam Grier hardly shows any of the spunk she’s so well known for. Not even in the fights in the arena. Her co-star Markov gives an even blander performance. They are better in Black Mama, White Mama.

With a running time of a mere 80 minutes this little piece of curiosity is manageable to watch. But it’s far from being a good or even memorable movie. The only reason it’s even released on DVD is because of Corman and Grier’s names are attached to it. And they don’t even bring their best to the screen.

*2019 update: the streaming version of this movie seems to have been cut. Some of the full frontal nudity by Pam Grier is missing. Most notably around the 55 minute mark. When she turns around after the butt shot is misisng.