It’s the second attempt to reboot the Terminator franchise after Terminator Salvation wasn’t the smash hit the studio hoped it would be. Apparently steering too far from the chase-movie concept the previous three movies had alienated audiences a tad too much. But where to go now, when everything that could have been told has been told? The obvious answer would be a reboot, but that would mean restarting a franchise with new faces while the original two movies are firmly beloved classics. That would also mean recasting the iconic part of the T-800 played by Arnold Schwarzenegger, which is the only consisting element holding these movies together even though he only had a CG-cameo in Terminator Salvation. Terminator Genisys tries to give the series a fresh direction to go in by toying with the timeline altering, which has been a great factor of the Terminator series since the very beginning.

Terminator Genisys links directly to the original movie by showing us the other side of what happened way back when both the Terminator and Kyle Reese were sent back to 1984 to respectively kill and prevent said killing of Sarah Connor. We see how John Connor leads the final attack on Skynet where they find out that a Terminator has been sent back in time. Reese along with a couple of other soldiers volunteer to go back in time, but it is Reese who is handpicked by John to perform this mission. When he goes back he ends up in an ally and flees into a convenience store followed by cops like in the original movie, but one of the cops turns out to be a T-1000. When Reese and another cop are pinned down an armored truck crashes through the window and disables the T-1000 for a few moments. Behind the wheel of the truck is Sarah Connor, the commando we know from Terminator 2: Judgment Day and not the mousy waitress from the original Terminator. Leaving the audience as confused as Kyle Reese in the movie, Terminator Genisys resets the 1984 timeline, paving the way for a movie which is more true to the chase movie concept and going into a new direction at the same time.

Within the first 30 minutes Terminator Genisys treats us to classic adversaries like the T-800 and T-1000 and shows us how the duo consisting of Sarah Connor and her Guardian T-800, which she calls pops, takes them out with a certain efficiency. Adversaries that once took entire movies to take down are now dealt with paving the way for another adversary, one already prominently featured on certain posters and even in the trailer. Because he’s a twist on the story I’m not going to mention him by name, but he has his own special features which surpasses that of the T-1000 and the T-X. 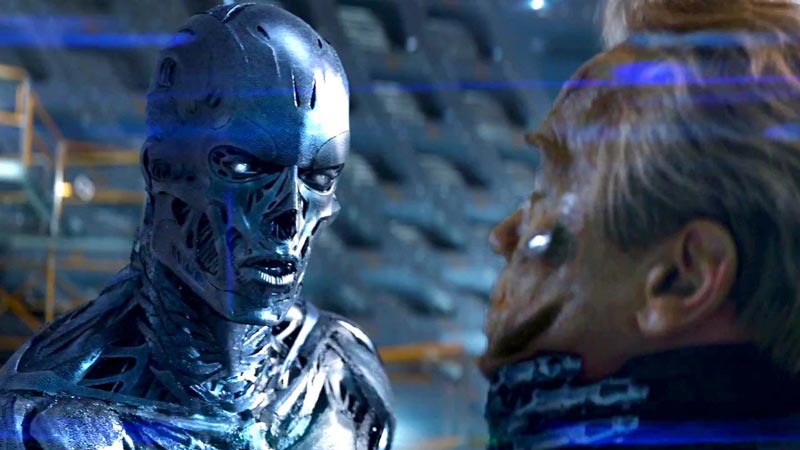 I went into the movie with pretty low expectations. The reviews were so-so and word of mouth wasn’t much better. Maybe it was because of these low expectations that I was pleasantly surprised. By now it’s pretty clear what you can expect from a Terminator movie, the same way you know what you can expect from Jurassic World. There is the bleak future, the plans to prevent Skynet from starting a nuclear war, the intense chase scenes and one-liners that this series has become famous for. Looked at it through nostalgic glasses the movie is quite enjoyable. It feels like a true Terminator movie, more so than Terminator 3: Rise of the Machines did. There are some cool scenes which are directly linked to the first two movies with the moment supreme being delivered early in a scene where Old Arnold takes on Young Arnold.

Taking the nostalgic glasses off for a moment it’s without a doubt that Terminator Genisys does have its fair share of problems. First of is the alternate timeline element which is supposed to be the jump start for a new trilogy. Time travel movies are always tricky because you’re bound to run into paradoxes. “Judgment Day is inevitable” the Terminator once said in Terminator 3, therefor seeing Sarah and Kyle go to great lengths to prevent Judgment Day from happening again is a bit tedious as it’s obvious their actions will only delay it. The bottom line in this series is that humans will at one point create a technology that will eventually become self-aware and start a nuclear war.
Aside from the more Mad Max inspired Terminator Salvation, this is the fourth movie which features a very small group of people constantly evading a Terminator while trying to come up with a plan to prevent Judgment Day. On that front Terminator Genisys brings nothing new to the series. It’s also kind of strange that they have replaced the entire cast except for Schwarzenegger. They’ve come up with this elaborate plot where yet another T-800 looking like him is sent back in time. The main weakness of this franchise is that Schwarzenegger actually is the franchise. A Terminator movie without him isn’t a real Terminator movie apparently, but at this point it doesn’t make sense that every T-800 looks the same since they were made to blend in with humans. 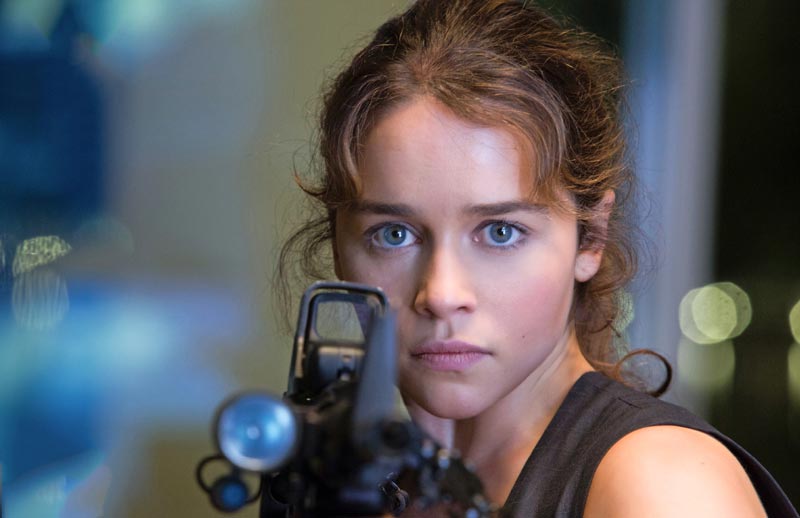 Sarah Connor is played by Emilia Clarke who is used to being protected by dragons in Game of Thrones is protected here by her cyborg Guardian. This role was originally made iconic by Linda Hamilton. We now laugh at her hairdo in the original movie, but her imposing physique and bad-ass character in Terminator 2 is one of cinema’s most memorable female lead characters. Clarke sadly hasn’t undergone the same training regime as Hamilton did, so her Sarah Connor may try to sound the part, but she doesn’t look the part. Her doe-eyed clean looks lack the raw edge required for this character.
Her co-star is Jai Courtney whose presence in the big budget action movies I can’t quite understand. He’s has such a generic look and feel and is a pretty bland actor. This marks the second time he appears in a long running franchise, the first being A Good Day To Die Hard. That reminds me of Dwayne Johnson who also has been showing up in sequels but since he has this great screen presence and charisma he elevates those movies to a higher level, which can’t be said about Courtney.

If you can ignore the whole timeline element Terminator Genisys is a wildly entertaining movie that breathes a sense of welcome nostalgia and pushing the series into a new yet familiar direction. Will there ever be a Terminator movie where they actually shutdown SkyNet for good? I’m not sure, but I wouldn’t count on it because as long as these movies make money, the series is unlikely to be terminated.