“Go woke, go broke” is a saying that has originated these past few years. It’s an expression typically used to express the sentiment that companies who embrace political correctness or cave to demands of social justice activists will suffer financially as a result. In terms of movies this means that movies containing woke elements tank at the box office. This tends to happen a lot by movies that are marketed to the audience as a feminist movie. Movies like this year’s Charlie’s Angels or the rather funny Book Smart. A movie I liked, but which flopped massively. The bad result at the box office then gives the feminists a talking point about how this sexist society won’t go to see movies featuring strong female leads. The reason I bring this all up is because Terminator: Dark Fate is also considered to be a feminist movie and it also tanked at the box office.

The hero image above this review shows the two main male characters in an intense scene. This is a “feminist movie” and I’m placing an image of the only two men in the main cast at the top. How sexist does that make me? There is a good reason of course. This was one of the more intense pictures I could find and the movie is called “Terminator: Dark Fate”. So it kind of makes sense to place a picture of two Terminators fighting above the review. I disagree with Terminator: Dark Fate being labeled as a feminist or woke movie. The franchise already had a strong female lead with the character of Linda Hamilton. Especially in Terminator 2 where she went full bad ass. Adding a female Kyle Reese character and a female John Connor character doesn’t magically make this movie “woke”. Watching this movie I never felt it tried to be a “feminist” movie, instead I felt it tried to be an actual Terminator movie. 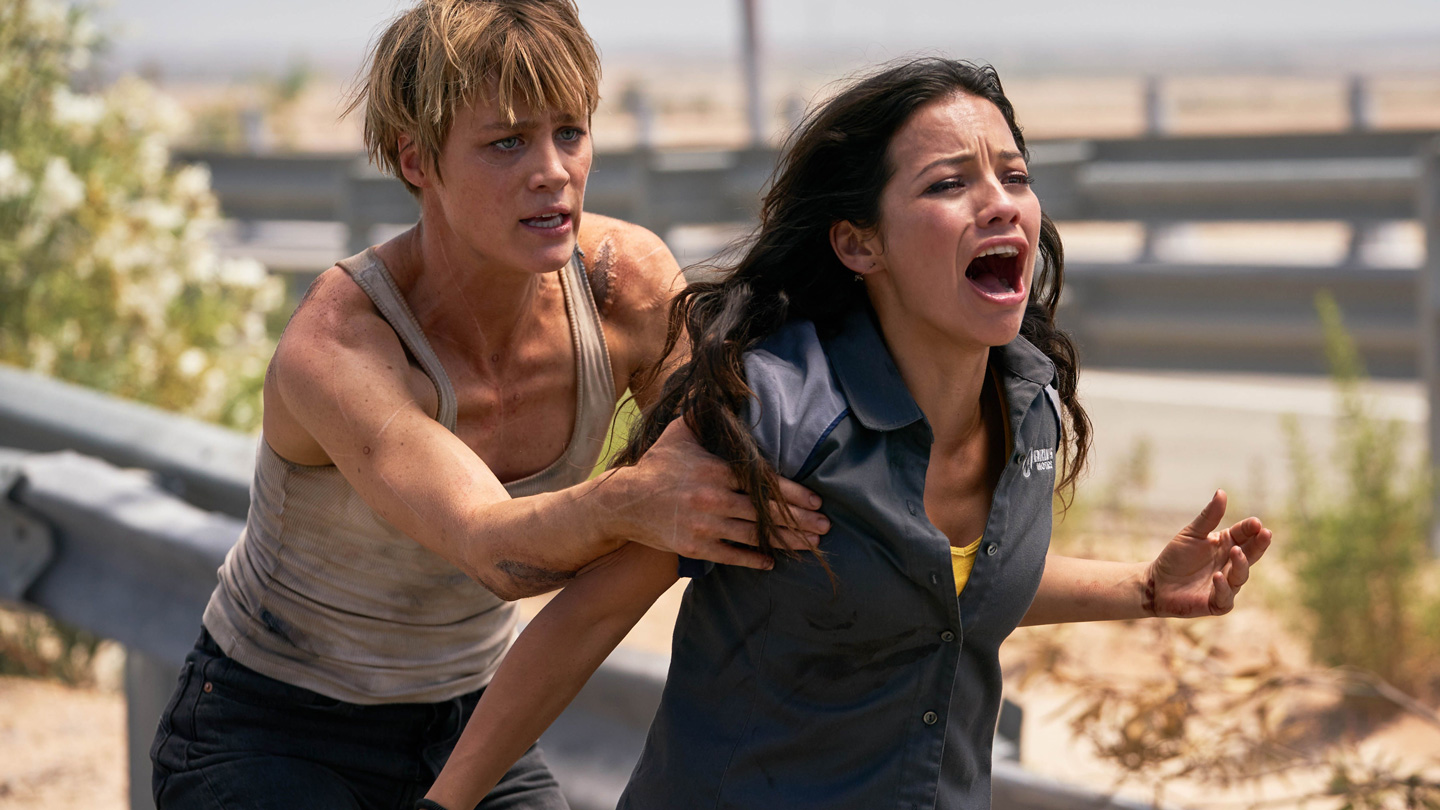 This is the point where Terminator: Dark Fate both finds success and failure. It’s an energetic movie, with some great chase sequences, all the familiar lines and a couple of returning faces. On the other hand it’s just that: another movie with a group of people running from an unstoppable machine sent back from the future. They have new faces, but we have seen these characters before. At one point Sarah Connor literally points out how she used to be Dani, the new girl who suddenly sees her whole world turned upside down.

As a Terminator movie it hits the right notes and follows the usual beats. You know the composition by know. A person and a robot come back from the future, there is a fight and a chase scene when they both find their target at the same time. After that these movies alternate between scenes that drive the plot forward and action scenes until the big finale which is always in some kind of industrial environment. Terminator: Dark Fate does exactly that, except this time the Kyle Reese character is a woman with an “enhanced body” making her able to go one on one with a Terminator and live to tell. 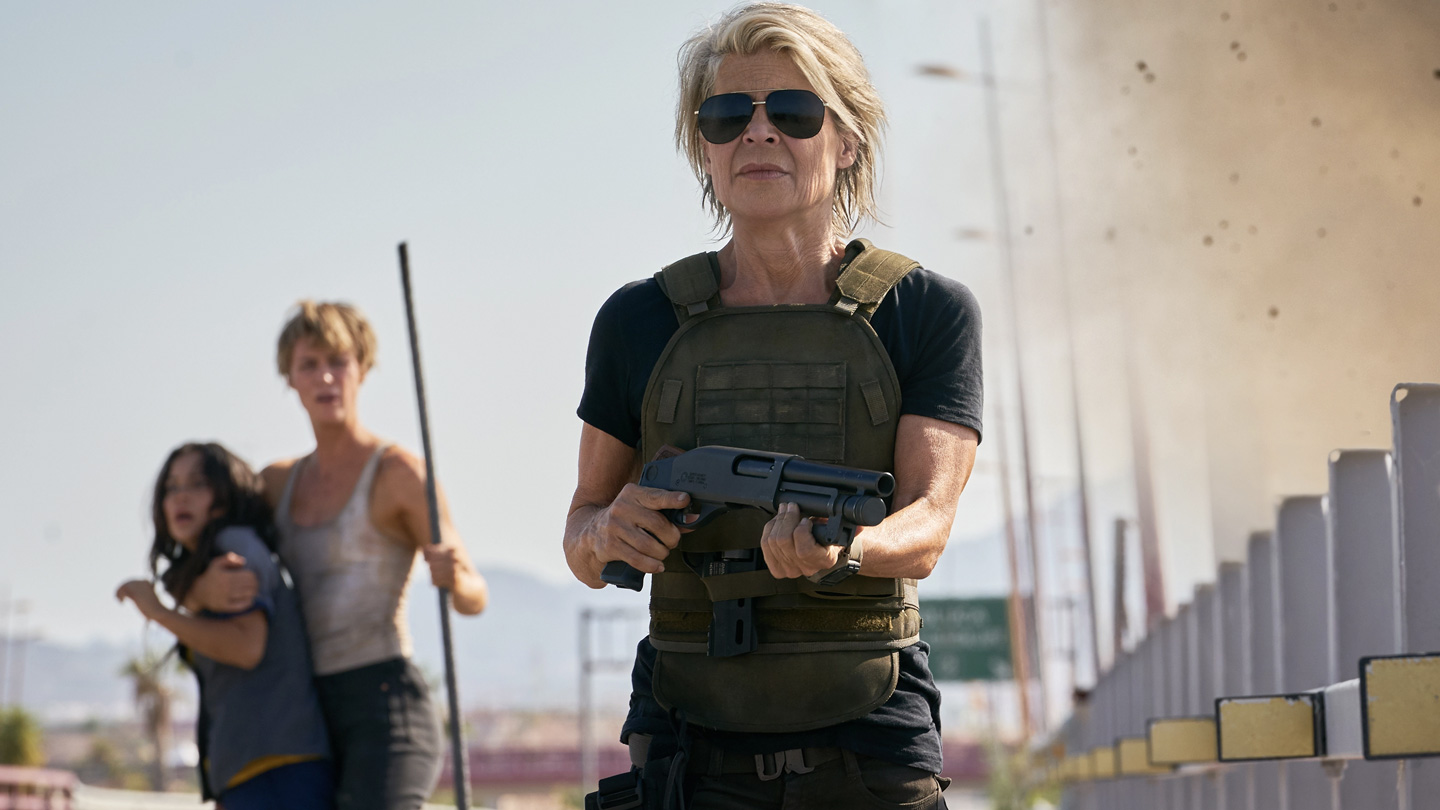 Even the evil Terminator in this movie, the Rev-9 model, doesn’t have revolutionary new features. Like the average iOS update he seems like a minor upgrade compared to the T-1000 and the TX from Terminator 3. The big new thing is that he can split his liquid metal element from his endo-skeleton so there are suddenly two opponent for our heroes to face in battle. But it does feel like an 80s toy gimmick, like the Transformers Pretenders toy line.

The Rev-9 is played by Gabriel Luna, making this the first latino Terminator. Then again, he the same shape shifting abilities of the T-1000, so he could look line anyone. This is something that bothered me throughout this franchise. With such chameleon-like abilities why do these Terminators always keep their main form when it comes to approaching the protagonist? The Rev-9 mimics Dani’s dad in their first encounter, but for the rest of the movie he never tries a stealth approach like looking like some generic ICE guy in the detainment facility.

Terminator: Dark Fate does fall in one pitfall previous sequels to Terminator 2 did as well. It makes the war against the machines inevitable. Sarah Connor stopped Skynet, so now there is something called Legion in the future which is behind the megalomaniac A.I. the humans are at war with. It is just old wine in a new bottle. The theme of the first two movies always was “no fate but what we make for ourselves”. The rest of the movies all go with “At one point humans will create evil A.I.” 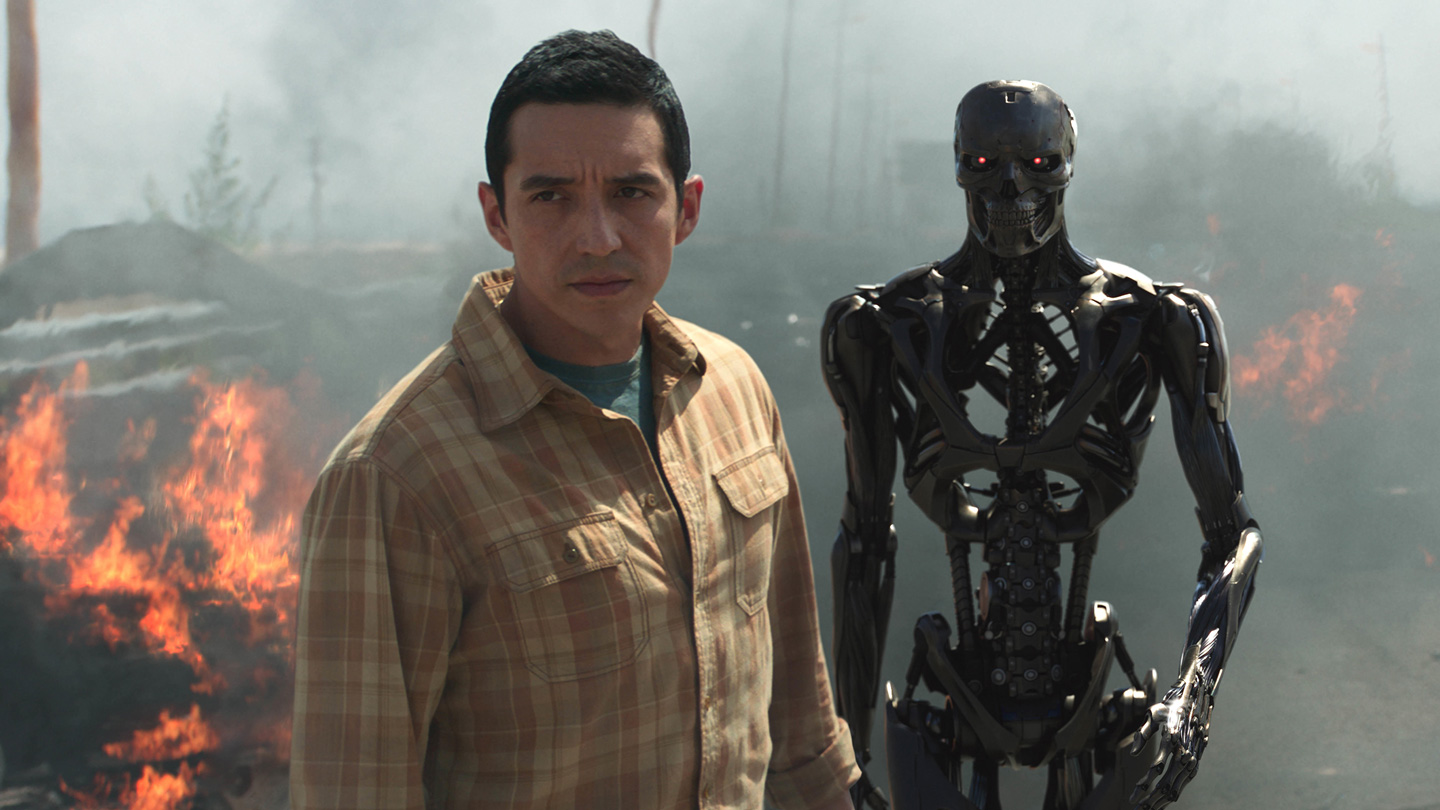 This will probably be the last time Arnold Schwarzenegger is playing the Terminator. The role that made him a household name. While he looks like a guy in his seventies, the action scenes with him never reveal his true age. This is something Martin Scorsese should have paid attention to when making The Irishman. Arnold has had a good run, but seeing him and Sarah Connor as elderly people makes me feel old as well. These were people who starred in two of my favorite childhood movies, and now they’re both gray and wrinkled no matter how much time they have spent in the gym in preparation for these roles.

Terminator: Dark Fate is an entertaining movie and a decent Terminator movie. But it’s not the reinvigoration we expected when James Cameron came back on board. It’s yet another two-hour chase movie, and that is fine to a certain degree, but it never lives up to the first two movies. Then again, neither did the previous three movies so the bar for this movie was not that high. It’s just simple two-hour popcorn entertainment that won’t go down in the books as a classic movie, but the movie that put the final nail in the coffin of the Terminator franchise. This franchise has been terminated.