The most extraordinary thing to come out of Swamp Thing is a glowing review by none other than Roger Ebert. He gave Swamp Thing 3 out of 4 stars. Beauty is in the eye of the beholder and there is a 40 year gap between his review and most contemporary reviews like this one. Ebert who has no problem with awarding genre movies 0 stars, apparently loved something in this movie. I wonder if we’ve seen the same movie.

Swamp Thing is actually a superhero movie. It’s based on a DC comics property with the same name and revolves around scientist Alec Holland (Ray Wise) working in a Swamp on a special serum that will allow plants to grow anywhere and thus end world hunger. A paramilitary group led by Anton Arcane (Louis Jourdan) tries to get their hands on the serum and use it for financial gains. During a raid on the laboratory, Alec gets covered in the serum and ends up in the swamp. The serum turns him into a mutated monster, a Swamp Thing if you will. Swamp Thing is almost bulletproof, extremely strong and can even regenerate limbs. Features that come in handy when you have to take on a group of commandos.

Missing from my synopsis is the character of Alice Cable played by Adrienne Barbeau who, at the time, was a familiar face in horror movies. She’s a government worker who is flown in to assist Alec on his work. She quickly becomes the center of the movie as she’s constantly being hunted down by the commandos and saved by Swamp Thing. She’s the classic damsel in distress. In the case one who shows ample cleavage and even some skin throughout the movie.

Made in 1982 it seems that Swamp Thing originates a template for superhero movies, that both Marvel and DC would use extensively from the 00s and on. The protagonist gains superpowers in the first act. Often due to a scientific mishap, some magical object or just by inventing something like a metal suit. In the third act he faces an antagonist who has similar powers often gained by stealing/copying whatever gave the hero his powers. The basic structure of 1982’s Swamp Thing is the same as that of 2008’s Iron Man and 2015’s Ant-Man. Marvel perfected the template that was still very rough back in 1982. 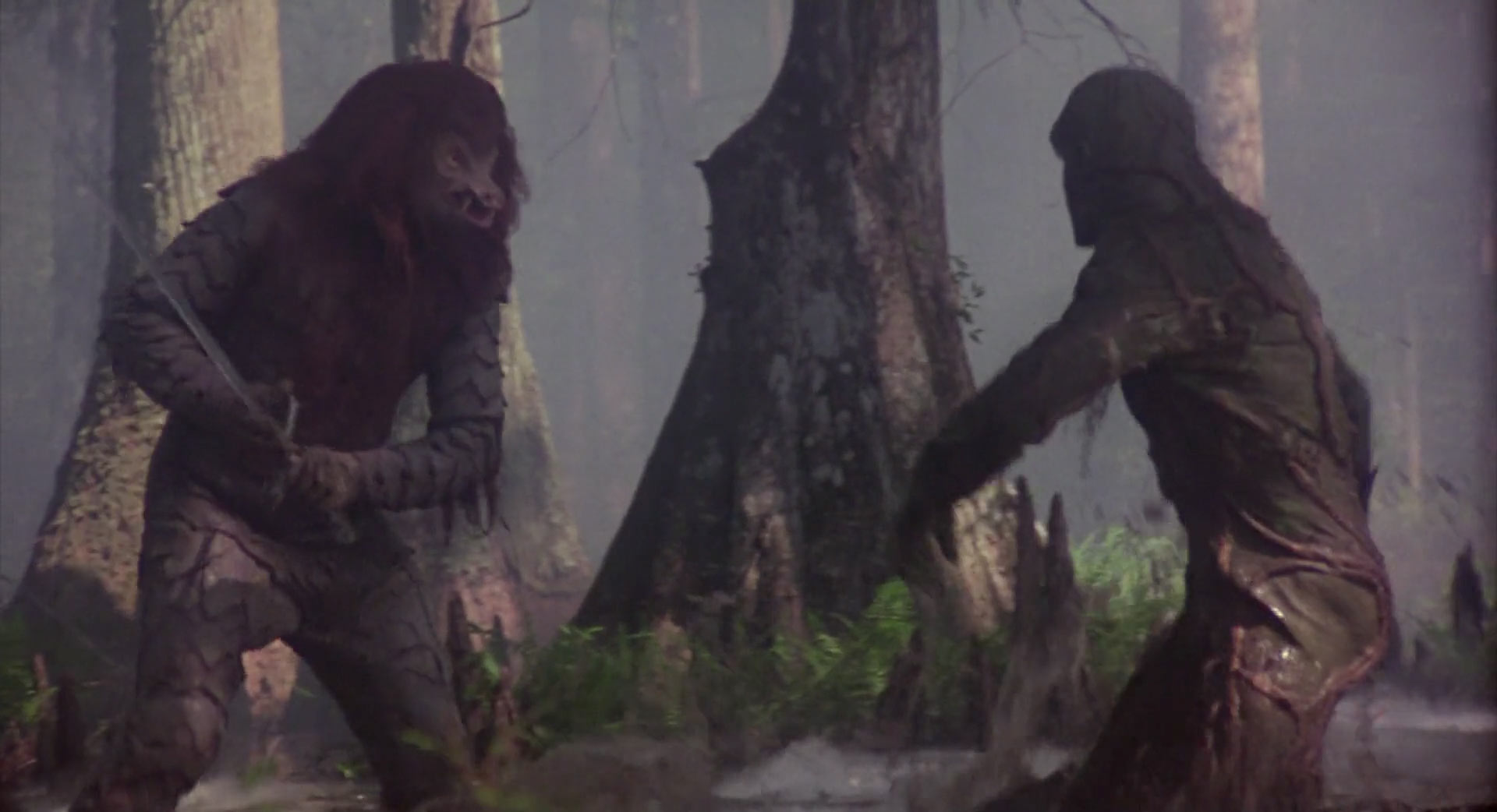 And rough is a term that applies to so many aspects of the movie. Whether it is the cinematography, the script, the special effects or even the costumes. Everything about Swamp Thing feels like a rough sketch of what could be a great movie. The first act is rather decent, though it looks like a Troma movie from beginning to the end with its washed out color palette.

After obtaining his powers and being played by a totally different actor (Dick Durock) in a shoddy rubber suit, the movie basically becomes a series of repetitive scenes consisting of Alice trying to escape the clutches of the commandos, Swamp Thing taking out the commandos giving Alice the chance to flee from this horrendous creature before the next group of commandos picks up her trail starts pursuing her bringing everything back to square one. This goes on a couple of times until the commandos finally find a way to capture both Alice and Swamp Thing.

Once caught, Arcane uses the serum to transform himself into a similar powerful creature, leading into a final showdown between the two. This scene looks like a deleted scene from The Power Rangers TV show. One they cut because the costumes looked too cheap.

This movie really didn’t age well. Swamp Thing’s rubber suit is supposed to look like plants and vines, but it never looks convincing. Especially not in daylight. And all of Swamp Thing’s scenes take place in daylight. While it’s directed by Wes Craven, is never feels like a Wes Craven movie. It’s just a generic action movie that is more in line with The Toxic Avenger in terms of style and quality than A Nightmare On Elm Street.

You should only watch it out of curiosity or just simply for Adrienne Barbeau’s boobs. Let me save you the trouble and 93 minutes: 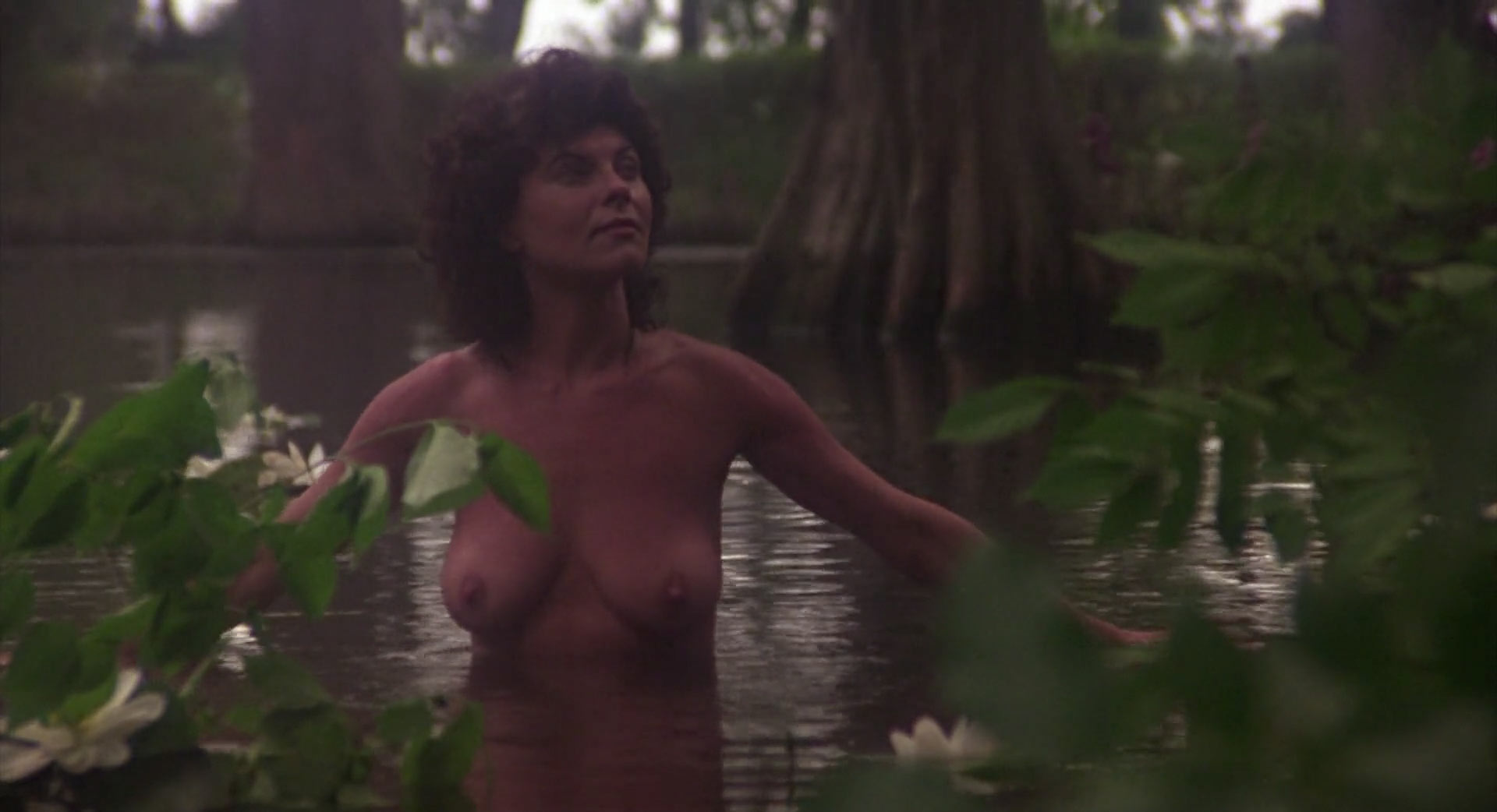