Blasphemy! It’s a word that will no doubt go through your mind when I confess my sin: I watched Street Fighter II – The Animated Movie with the American soundtrack while I had the option of watching it with the original Japanese soundtrack. Well, out of nostalgic reasons and just because I like the American language better than the Japanese to listen to I did. So here are my thoughts about the second attempt to create a good Street Fighter movie as the live action version starring Jean-Claude van Damme sucked balls and the years later on released ’reboot‘ of the franchise Street Fighter: The Legend of Chun-Li didn’t fare much better.

Well luckily the adventures of Ryu, Guile and the others are better suited in the world of Anime than in live action. This movie is like the game come to life. The characters look the same as in the game, they have similar back-stories as in the game and their fighting moves are similar to that of the game. So yes, in this movie Bison does teleport and Ryu and Ken shoot balls of fire from their hands. But they get away with it because it’s a cartoon. Now if this would have been live action we would all stare at the movie and say: yeah right. But in an animated feature as this it just makes perfect sense. 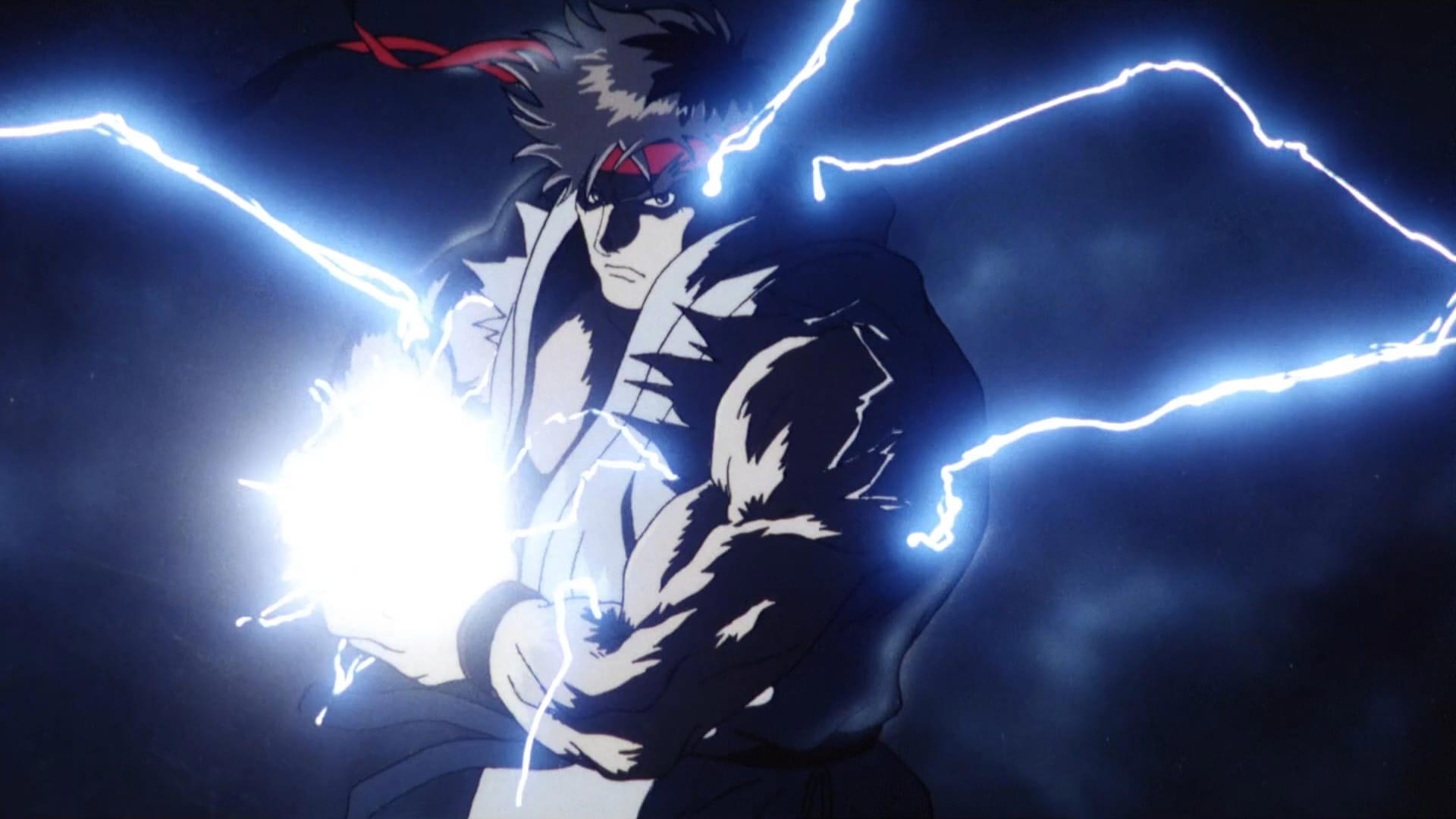 Now you’re probably wondering what kind of weird an preposterous plot they’ve cooked up this time for our Street Fighters. Is it finally something with just some kind of tournament? It worked in Mortal Kombat!

The answer is no.

Basically there is not so much of a plot actually. Bison is the leader of the criminal organization Shadowlaw/Shadaloo/whatever and he has hypnotized Cammy, a British Agent for MI6, to assassinate the minister of justice. This brings Interpol agent Chun-Li on the trail of Bison and she enlists the help Col. Guile. They find out out that Bison wants to hypnotize the best fighters in the world with his often mentioned Psycho Power and use them as his own personal army. His henchman Sagat had an encounter with Ryu which he lost but did get recorded by a Monitor-Cyborg. A what you say? A monitor cyborg is a robot who monitors (like duh) the fighting skills of all the top fighters in the world and sends the footage back to Bisons headquarters so it can be analyzed. Turns out Ryu has the best fighting potential of all, but because he keeps on wandering over the globe like a vagabond or David Carradine in Kung Fu he’s really hard to find. Well these cyborgs are all over the globe themselves to record fights and so the writers have an excuse to insert random fights between the characters of the video game. 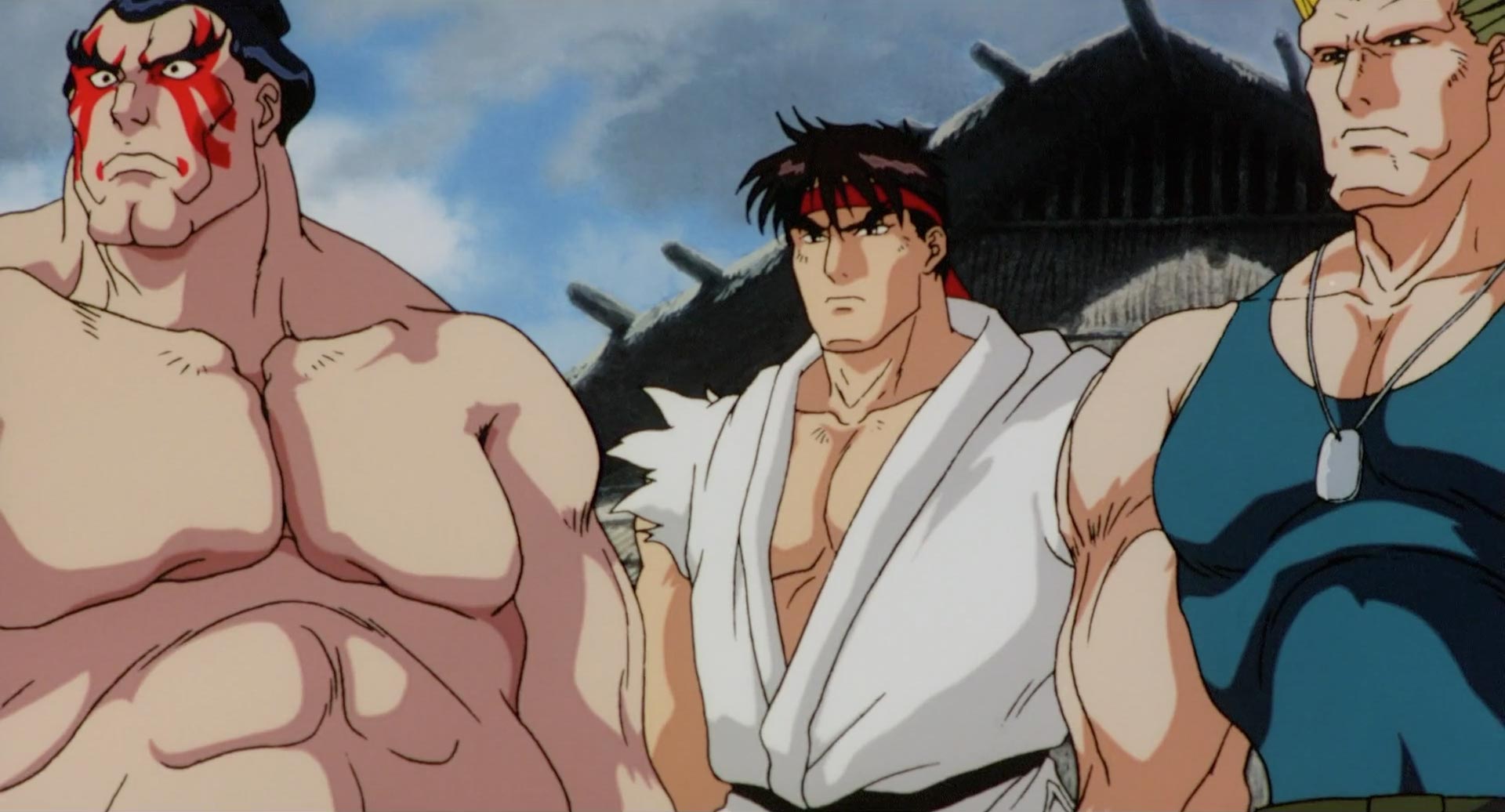 So the plot is basically absent and nothing less of an excuse to show us all the characters perform their video game moves in a Japanese animated style which is basically what everybody who watches the movie wants. So it basically delivers on what you’re expecting and to add to that they really went out the create some slick animation. Street Fighter II – The Animated Movie simply looks great. Very colorful, the characters stay true to their origins and great character animation. At least everybody from the video game shows up in at least one scene and gets to fight. I’m glad the guys in Japan understood what we want from a movie like this unlike their American counterparts.
As a bonus we get some animated titties from Chun-Li under the shower. For that you do need to watch the uncut version because in the American version the censors thought it was inappropriate to have some gratuitous cartoon nudity so they had this cut out. They, of course, overlooked all of the violence and blood in the film, but at this point I wouldn’t expect anything less of the MPAA.

So Street Fighter II – The Animated Movie is a fun movie, very watchable and entertaining even without a plot, or maybe because of the lack of a plot. Which version you watch is up to you; The American dubbed or the original Japanese. I must add they they didn’t just redub the voices, but the original soundtrack has also been changed at fights-scenes where now more rock-oriented tunes have been inserted. Give both versions a chance as one is not better than the other.