When a movie is called Street Fighter it raises certain expectations, one being that it revolves around street fighting. But there is no street fight in the entire movie… none! In fact, aside from the finale there is hardly any fighting in the movie, which is strange considering the property it was based upon, a video game, consisted of almost only fighting. No Street Fighter is more concerned with trying to create somewhat of an excuse to have all the different fighters from the game together in one movie. The most logical thing would be something like a tournament movie, the approach Mortal Kombat took, but instead they chose to make a movie about a variety of people trying to take down the dictator of a small Asian country named Shadaloo: Colonel Bison (Raul Julia).

Top billed of the people trying to take down Bison is Jean-Claude van Damme who was at the top of his career when he made this movie. Funny thing is that for a Van Damme movie even he gets little to do. 90% of the movie he’s just making threats, rallying men or delivering speeches. Aside from a kick and a punch halfway through the movie he doesn’t do anything interesting until he sneaks into Bison’s lair and challenges him to a one-on-one fight. This is the point where everybody starts getting into fights by the way: Cammy (A bland and hardly sexy Kylie Minogue) against some henchmen, E. Honda against Zangief, Ryu and Ken against Vega and Sagat. Chun-li and Balrog are mostly trying to get some hostages to safety and Dhalsim is just a scientist while Blanka is also fighting some henchmen.

If I sound bored, well that’s because it never gets really exciting. The movie is 80 minutes of scenes finding an excuse for the next scene and 15 minutes of climax, which comes too late to make the viewer even care. The only thing keeping the 80 minutes watchable is the late Raul Julia who, even when deadly ill, manages to steal all the scenes and Ming-na When who shows some spunk as Chun-Li. Not that here character is at any point believable but at least she’s fun to watch and seems to be in on the joke.

The joke you say? 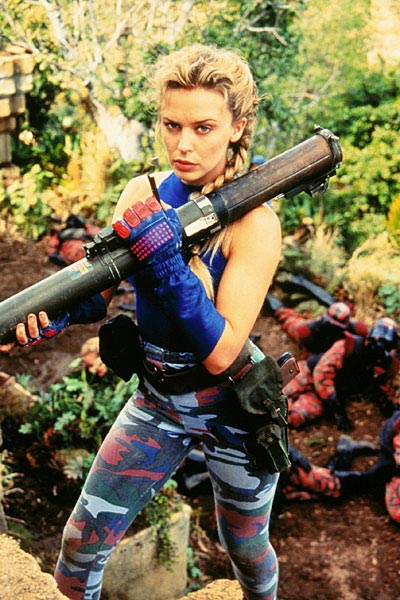 Yes, well it’s apparent that writer/director Steven E. De Souza tries to deliver a movie that can’t really be taken seriously. It’s full of throwaway jokes and comic-relief characters like Ken, DeeJay and Zangief. Then again all the goofiness is interchanged with the serious and wooden delivery of Jean-Claude van Damme who’s supposed to be an American Army Colonel, yet has his signature thick French accent which they don’t even bother to make an excuse for. Then again this is a movie in which boxer Balrog puts on boxing gloves during the finale when he’s fighting. Who in their right mind would put on boxing gloves against armed soldiers? Never take your boxing gloves to a gun fight.

Then there’s this one funny thing about Bison’s lair. He has a female voice over announcing everything. Normally it’s something you only hear when a place is about destroy and the voice announces how much time is left. Not in Street Fighter no. In Street Fighter she announces everything, the most notable thing being “Hostage pit opening”. So you have a lair in the middle of Shadaloo and instead of prison cells you actually build a “hostage pit”? But it doesn’t stop there. He actually hired a woman to record sentences concerning the hostage pit. I wonder how that went for her;

Hey honey, how was your day?

Well you know; same old, same old. I recorded some lines for this dictator or something

Well one was an alert message for when his hostage pit was opening.

Oh really? We should get one of those.

Street Fighter is pretty awful and only mildly entertaining. Only the comic relief in the form of DeeJay and Zangief works though I’m really surprised how Zangief is treated at the end of the movie. He’s this high ranking guy in Bison’s army but really stupid (which is where the humor comes from). At the end he finds out that Bison is the bad guy so he starts helping the good guys. After all is over we see him talking with the other good guys while numerous anonymous soldiers of Bison’s army are taken into custody. So all you have to do is change sides 5 minutes before the end of the movie, hold open a door and all will be forgiven. Water under the bridge and what not.

In the real world is doesn’t work that way, not even for bad movies.