Split Second is one of those movies with a title that seems to have been chosen just because it sounds cool. The only reference to ‘split second’ I could find in this movie was that the Rugert Hauer’s character Harley Stone always just misses the killer he’s been chasing for years. For some strange reason he always knows where he’s going to strike next, yet has been after him for years now. The killer leaves clues, but his identity is a mystery… or is it?

The big revelation in this movie is murdered instantly you look at the movie poster which has Rutger walking towards the viewer with a big gun and a giant alien-like creature behind him and one of the selling points is the tagline “Blade Runner meets Alien”. There are different movie posters and video covers that don’t show the beast, but when performing a Google search the majority does. You know what doesn’t show the creature? This movie for the majority of its running time.

Though it’s quickly clear in terms of clues the killer leaves behind that it’s not human, the movie doesn’t show the creature until the finale. Something which is probably do to budgetary reasons and makes this movie feel a bit like Jaws, a feeling which is aided by the amount of water in most of the scenes.

Set in 2008 the water level has risen so high parts of London are under water. This gives the movie a gloomy atmosphere with cars driving through water and police officers driving mini hovercrafts. Not much is shown of everyday life in a city that’s party flooded, which is a shame because that could be much more interesting than the chase between Harley and the killer. 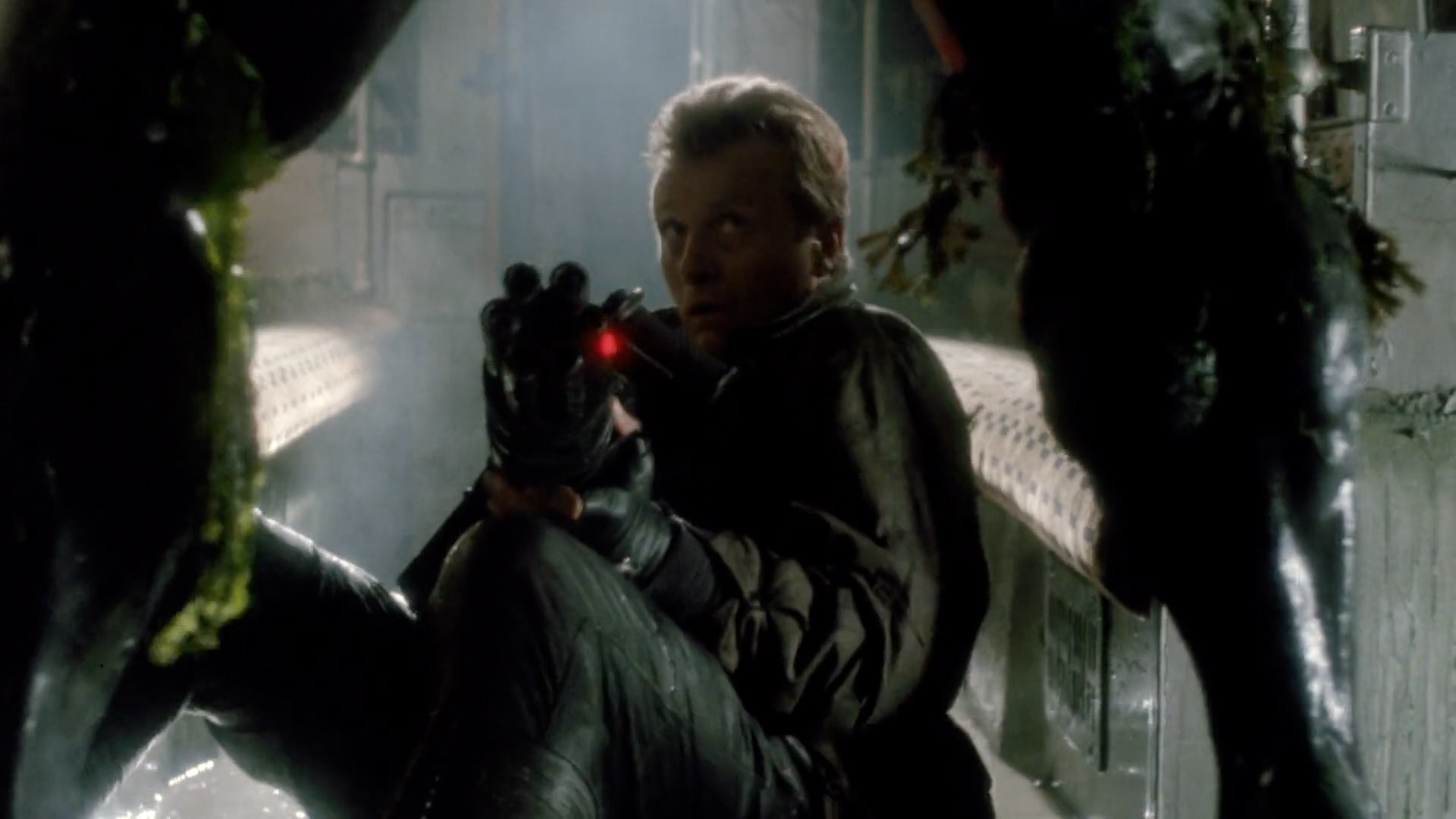 One thing sci-fi movies all have to endure at one point or another is that time catches up with them. Predator 2 was released in 1990 but set in 1997 which made the little futuristic adjustments look goofy by the time that year rolled around. The same goes for Time Cop. In this movie the future is merely used to explain the risen sea levels, and other than some vague explanation for the monster the whole future element doesn’t provide the movie with anything extra.

Comic relief is provided by Dick Durkin who is the smart but egghead detective who is used to create the standard miss-paired cop partners every movie about a hard-as-nails maverick cop has. Stallone had Rob Schneider in Judge Dredd, Murtaugh had Riggs and here Harley has Dick, which whean read out loud sounds funny. The most enjoyable scene in the movie has got to be the moment the Dirk barely escaped an encounter with the creature and goes crazy in the weapons room of the police station, searching for the biggest gun they have. It even became the tagline of the movie: He’ll need bigger guns… yet another not so subtle nod to Jaws.

Come to think about it. I might have to correct myself there. Maybe the most enjoyable scene was when Samantha from Sex And The City gets her own personal homage to Psycho when she’s taking a shower and seems to be in danger. It’s not that impressive scene in terms of tension, but at least she shows some skin.

Split Second is low budget flick that constantly borrows from bigger and better movies. Blade Runner, Alien, Predator 2, Jaws, Psycho etc. I suggest you watch each one of these movies unless you’re in for some B-movie bonanza.