A viewing of Showgirls to my girlfriend last week showed me how biased in a negative way people can be about this movie. She heard how supposedly bad this movie was. She wasn’t really warming up to the idea of potentially throwing away more than two hours of her life by watching an atrocious film. Big was her surprise, and mine in a way, when she responded after watching the movie “well it wasn’t that bad” which is basically what is the problem with this movie: it has been given such a negative press and word of mouth that is actually turns out better than most people expect it to be up front.

Showgirls is surprisingly watchable, and while no masterpiece at all I too found it to be not that bad after watching it for the first time somewhere in the 90’s and being familiar with the shit-storm it generated at the time. Showgirls isn’t a good movie, far from it actually, but it is an entertaining one. On occasion for the right reasons but ever so much for the wrong reasons.

The movie stars Elizabeth Berkley as Nomi Malone who was one of the cast-members of Saved By The Bell, a TV show which featured little talent. You have got to feel sorry for the girl; against all odds she was the first one of that series to have a shot at making it big. She was going the be the new Sharon Stone. She was starring in a movie with successful director Paul Verhoeven in a movie based upon the most expensive script ever written by Joe Eszterhas. Well, she did not really end up having a great career due to this movie I guess. Then again, she had a shot, you can’t say that about any of the other cast members unless you count Screech’s sex-tape.

The movie has a big budget and it shows. There are big sets, location shots, extensively choreographed dance sequences and other elements that provide a sense of big amounts of money spent on the movie. It looks absolutely astonishing but under the hood of this exotic sports car there is a pretty bad functioning engine. 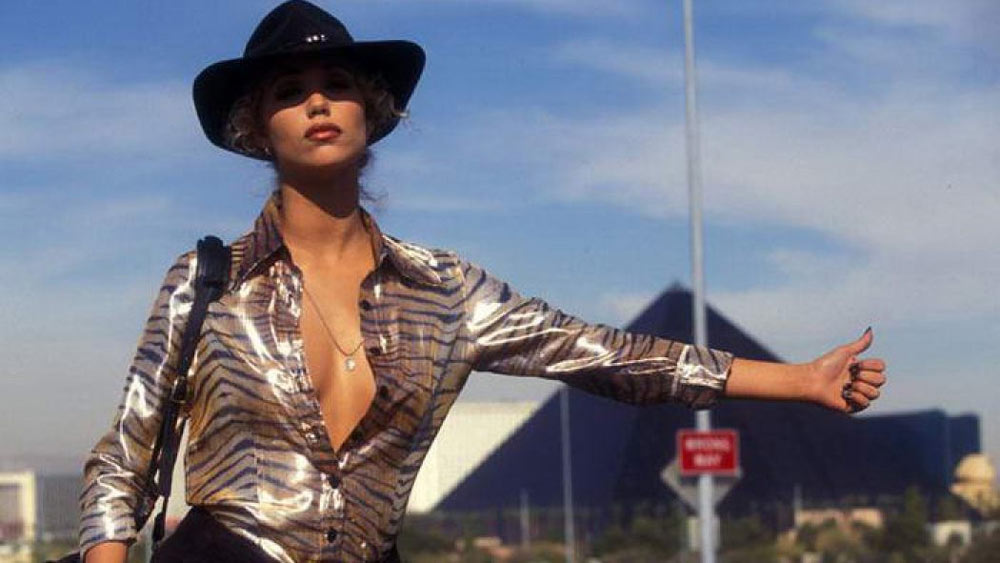 The movie has no characters that generate sympathy with the audience. Basically each and every character is rotten to its core. Only the character of Molly, Nomi’s friend and moral compass, is nice. But then again she is also rather stupid.

But while the villainous parts of the movie don’t deserve our sympathy, the protagonist should. Nomi Malone however, is written as a borderline chick with a hot body and a shitty character. She’s running around with this hothead attitude simply hating the world. She obviously damaged goods but the movie reveals the reason behind her attitude in the final 10 minutes of the movie. At that point it becomes clear why she refuses to give her social security number early on and why she’s so full of temper. But by then she has been a nasty bitch for 120 minutes so it doesn’t quite put her character in a different perspective. Not even kicking the shit out of a rapist will make you feel different about Nomi.

Sadly it doesn’t stop at lousy acting and unsympathetic characters; there’s also the script. It’s a simple straightforward written story but there have been some attempts made to enrich it. Like the rape scene later on in the movie. But on a whole it is poorly written. Soap-Opera quality writing on a big budget movie.

Some of the dialogue is really atrocious like the whole “do you like having nice tits” scene and it is actually pretty funny in a cringe worthy way. Even Kyle MacLachlan who has shown he can deliver lines brilliantly in Twin Peaks just seems bored with his role. Only at the end do we see something of the sparkle of Dale Cooper.

Also very weird was the aforementioned rape-scene. Where did that come from, and why is it in the movie? How realistic is it that this famous musician leaves the party downstairs with a girl he just met and takes her to his room,  then his bodyguards come in and they look at each other as if they know what’s is going to happen. All three of them rape her and leave her to crawl back downstairs to re-enter the party all bloody. What kind of musician would do that in a crowded hotel together with his bodyguards? The way they engage in the rape was as if this is something they did on a regular basis.

So Showgirls is a rather bad movie, but it does have certain qualities and is really a guilty pleasure in my book. First of all it looks great, the choreography is good, there’s plenty of (unintentional) humor and lots of gratuitous nudity. I don’t mind looking at nude women in the back- and foreground for the majority of the movie’s running time, and it serves a purpose too: what is a movie about topless entertainment shows if the actresses don’t go topless?

The story is entertaining and fast paced. Even with its 120+ minutes the movie doesn’t feel overlong and is quite enjoyable actually. Showgirls might have destroyed a couple of careers and the NC-17 rating, but it also will go down in history as a campy cult classic. And I just simply like it for its shiny exterior. For those not looking anymore than that I can only suggest to watch Showgirls and come to the conclusion that “it’s not that bad”.