Showdown in Little Tokyo, a title that sounds more exotic than the movie actually is. Little Tokyo is located in LA and Dolph Lundgren plays a cop who seems to be operating somewhat by his own rules and is an expert in martial-arts. The same goes for his new partner Brandon Lee who also knows how to perform some nifty moves. Not surprising considering the fact that his father was none other than Bruce Lee. Together they find out that the Japanese mafia, the Yakuza, is taking over Little Tokyo and plans to export Crystal Meth from a brewery in beer bottles.

Directed by the man responsible for giving us Schwarzenegger’s ultimate one-liner fest “Commando“, Mark L. Lester brings the same approach to Showdown having the two leads bicker, make snappy remarks and spout one-liners before and after the ass kicking. And there is a lot of ass kicking. Both Lundgren and Lee first use their fists and feet before reaching for a gun. Dolph even has this ability to jump over a moving car. 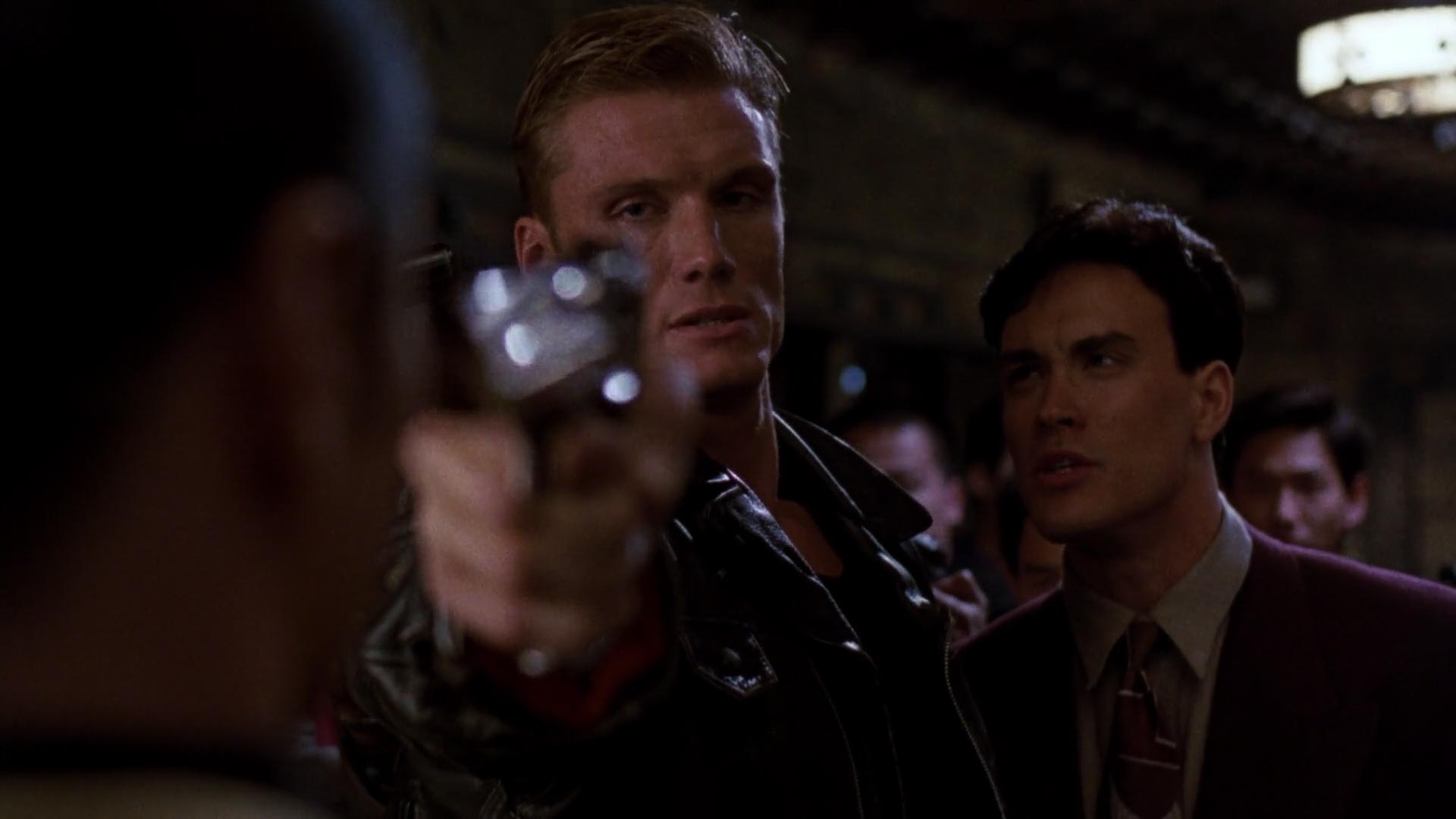 Showdown in Little Tokyo is 75 minutes of 80s testosterone, despite being released in 1991. Both Lundgren and Lee never wear any formal police clothing and especially Dolph always wears something showing of his muscles. At one point we even get an ass shot. It’s no wonder he and Van Damme have made multiple movies together as they both love to show off their bodies. Like a lot of these movies the homo-erotic undertones are a plenty, like an extended brawl in a bathhouse or the relationship between the two partners. At one point Lee says to Lundgren: “you have the biggest dick I’ve ever seen on a man”. What kind of guy says that to his colleague? To compensate for the homo-eroticism Lester also provides the (male) viewer with a lot of female nudity. Pool parties with topless women, a restaurant where you can eat sushi of naked female bodies and a body double for Tia Carrere performing a sex scene with Dolph. “Boobies! Boobies everywhere!” Buzz Lightyear would say. 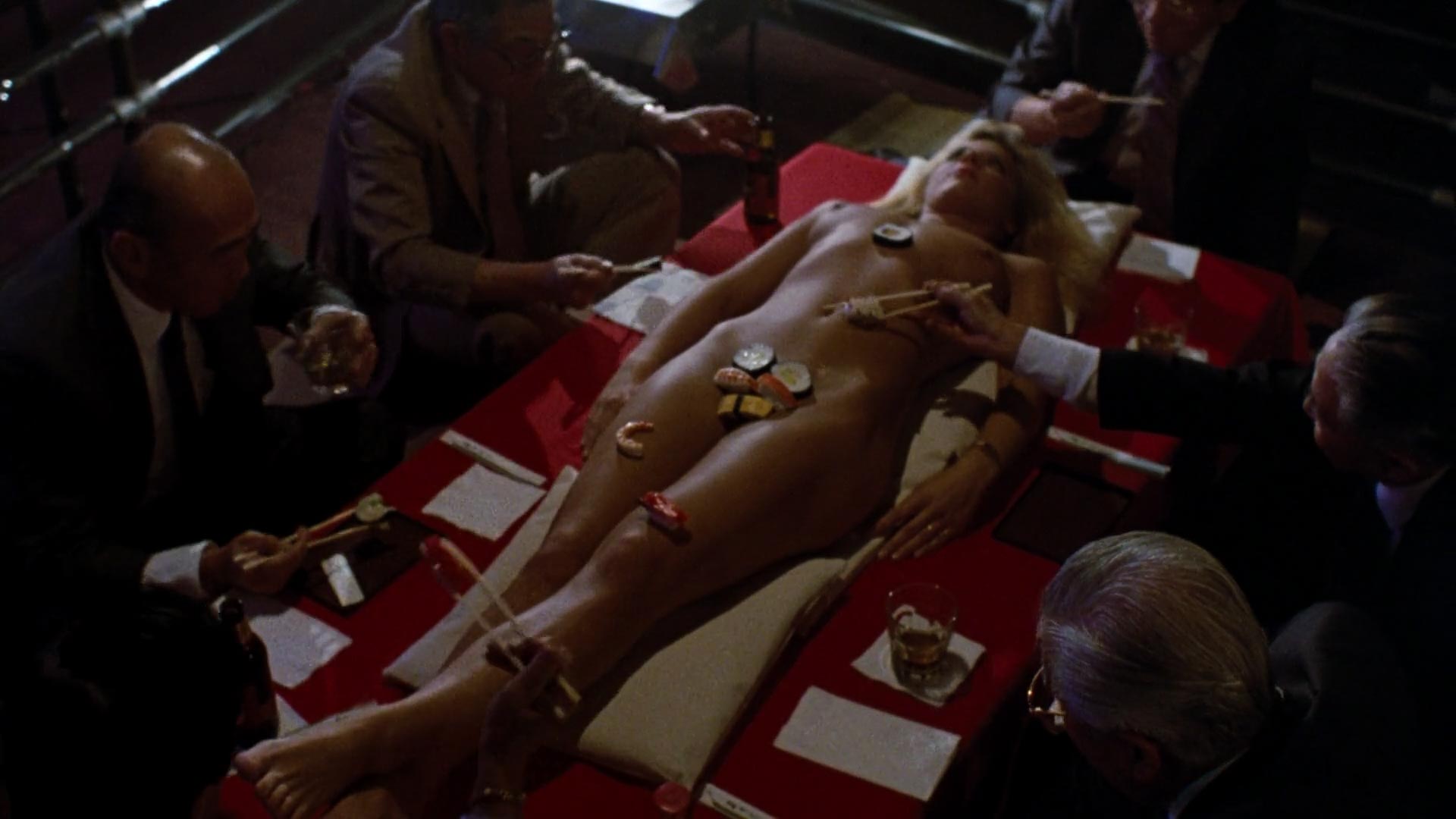 Watching this movie made me wonder why Lundgren is really such a low-ranked action-actor. Sly and Arnie are both A-listers, Seagal, Norris and Van Damme come next in line, but not Lundgren. While he speaks better English than Van Damme he seems to me to be the C-choice. While the others on the list all had enough plenty theatrical releases throughout the 80s and 90s it feels as if Lundgren’s movies went straight to video, especially here in Europe. But I must say that he can carry a movie and is fun to watch, but his filmography lacks real classics, not counting (small) parts in movies like A View To A Kill, Rocky IV and Johnny Mnemonic.

This is a silly movie with a plot I didn’t really care about. The action was good, and the villain menacing, but his plan of smuggling Meth in cases supposed to be filled with beer is just too stupid. How brilliant is your plan if it consists of making drugs in a brewery and then transporting it in bottles with the name of the brewery which are in cases with the name of the brewery? This is the level of intelligence that should be used she watching this movie, because is just doesn’t make much sense.