The 80’s was definitely the era of the robot in movies. They came in all shapes and sizes, animated and live-action. Transformers, The Terminator and Robocop to name a few. Even Rocky IV had a supporting part for a robot. But one of the most lovable robots of that decade was Number 5 from the movie Short Circuit. A military prototype who came alive after being struck by lightning. He developed a sweet, pacifist and innocent character, melting the hearts of audiences everywhere. At the end of the movie the military were tricked into believing they had destroyed him and Number 5 road off into the sunset with his protectors Newton and Stephanie.

Two years after the events of the first movie Johnny 5, as he calls himself now, returns in the uninspired titled Short Circuit 2. A lot has changed since then. Johnny 5 is living in a remote area with with Stephanie and Newton. Both whom are absent from this movie. Ben (Fisher Stevens), Newton’s colleague from the previous movie, on the other hand is trying to make a living as a street vendor selling Number 5 toys in what is supposed to be New York. One minute you’re a hot-shot robotics scientist, the next you’re trying to make ends meet on a street corner selling toys. 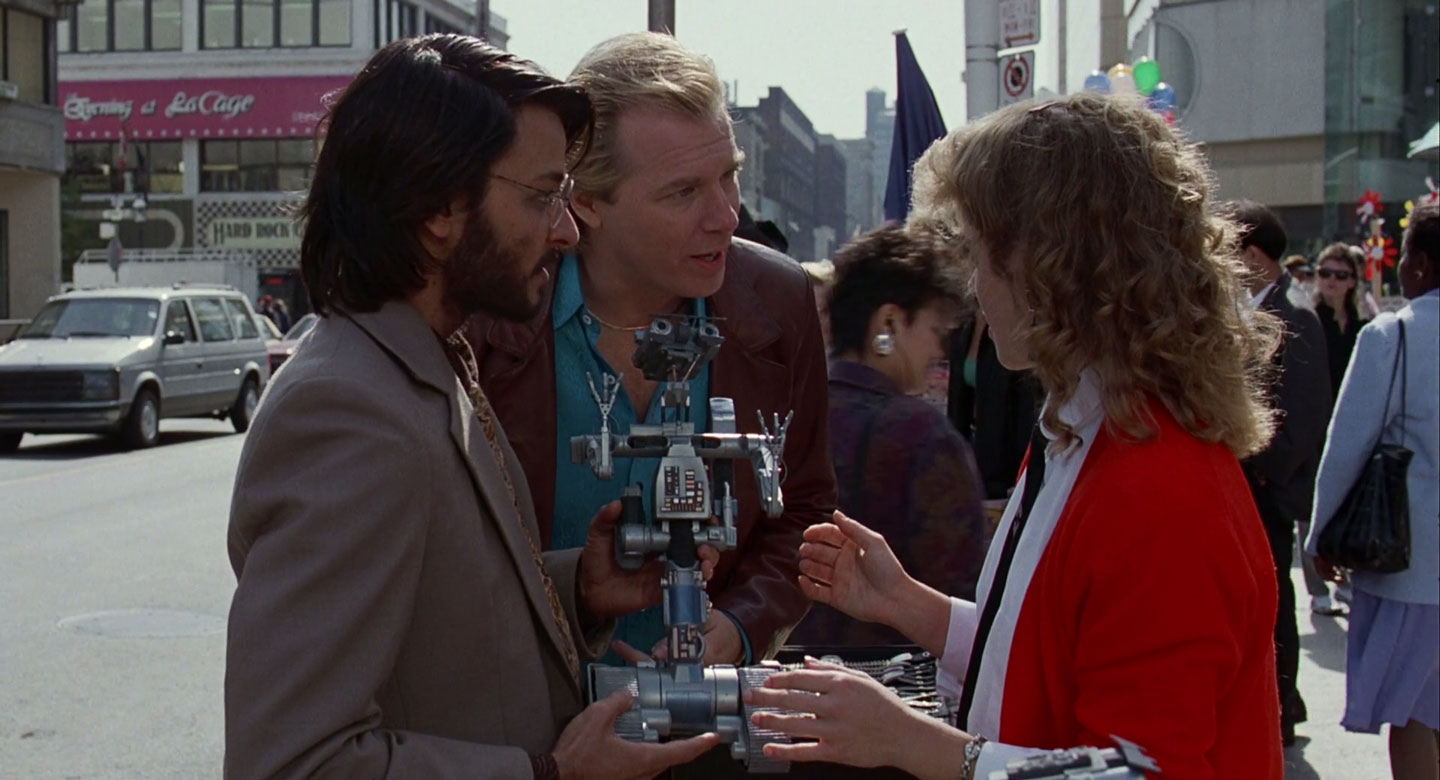 His luck changes when a representative for a toy company is interested in his toys and offers him $50,000 for 1000 Number 5 toys. In order to create such a volume he goes into business with a shady street vendor named Fred (Michael McKean) and hires an abandoned building. But that building is already being used by a couple of criminals who are trying to break into a bank vault across the street. They don’t take kindly to these new occupants to put it mildly.

When a run-in with the criminals has Ben loose all his factory personnel, Johnny Five comes in to help him with the production of the toys. But is the gullible Johnny Five prepared for life in the big city? The answer is no of course.

To be honest, Short Circuit 2 scarred me as a kid. Whenever I think about this movie, there’s always this pit in my stomach. This movie contains a scene in which a couple of crooks try to destroy Johnny 5 with axes. It’s a pretty visceral scene in which they hit him in the eyes and chest. Red battery fluid is everywhere and they really bust him up good. If this was a real person instead of a robot, this movie who have instantly been rated R. This was quite a shocking scene when I was 10 years old. It is basically the same as torturing a child. Or worse, a puppy. 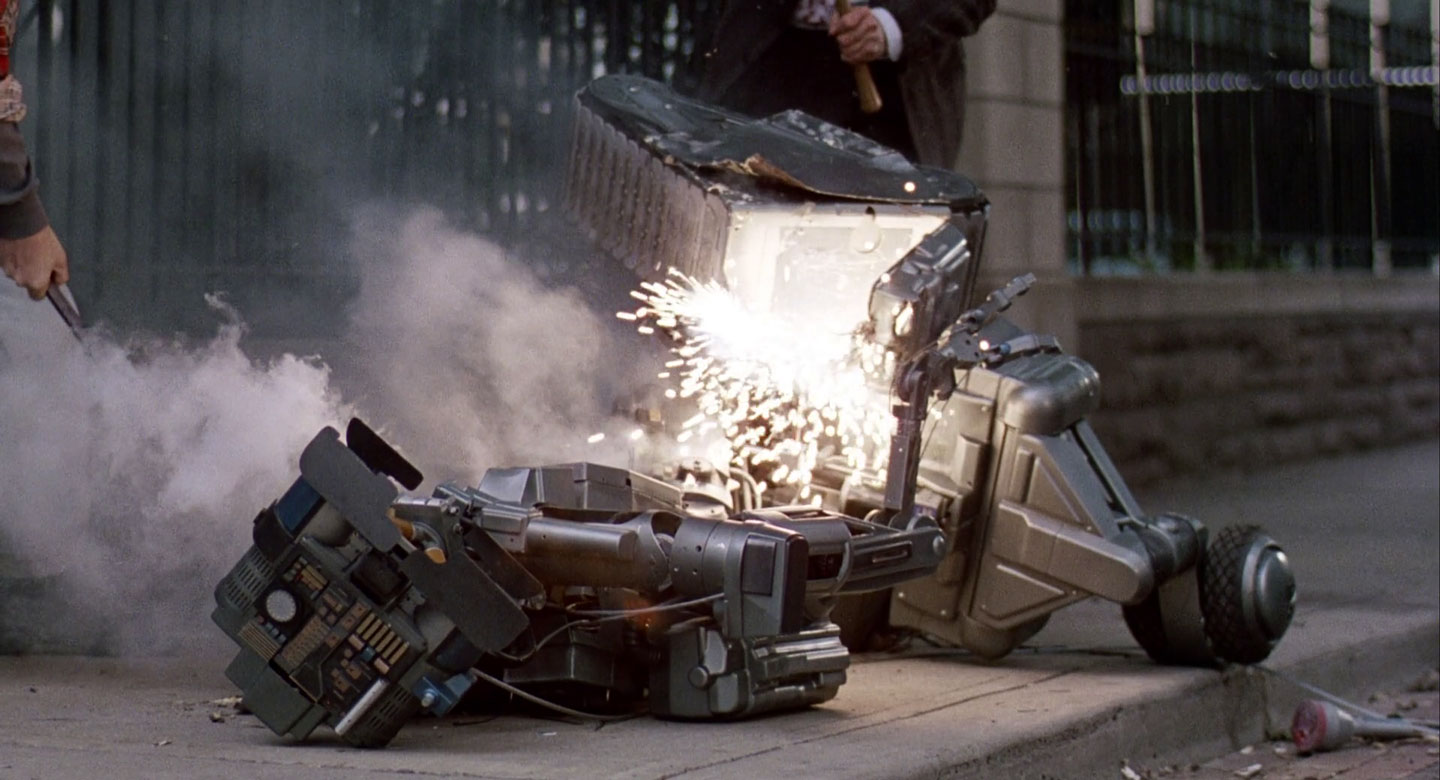 Credits to the puppeteers as they perform one of the greatest magic tricks of cinema. They can bring an animatronic to life on screen. And in such a convincing way that we as an audience actually feel sad when something happens to it. The people behind the character of Johnny 5 have done a great job of bringing him to life and giving him a personality. Too bad he only got two movies. I’m sure if this franchise was made today he would at least get a couple of straight to video sequels and a cartoon spin-off for the kids. Come again, maybe two movies is enough. There’s no need for yet another franchise to be milked dry.

Most of the movie is a about Johnny 5 exploring the big city, often searching for input. His never-ending trust in humans is constantly abused. A latino gang manipulates him into stealing car radios, Fred tries to sell him and a thug convinces him to help him break into the bank vault. It’s kind of sad actually how many people Johnny 5 runs into abuse his gullibility. Short Circuit 2 is a very bleak movie when come to think of it. Almost everybody is an asshole.

What is disappointing about the movie are the missing cast members. Both Steve Guttenberg and Ally Sheedy passed on this sequel though the latter can be heard in a voice recording to Ben. They’re both mentioned plenty of times in the dialog, creating a bigger emphasis on the fact that they are not in this movie. 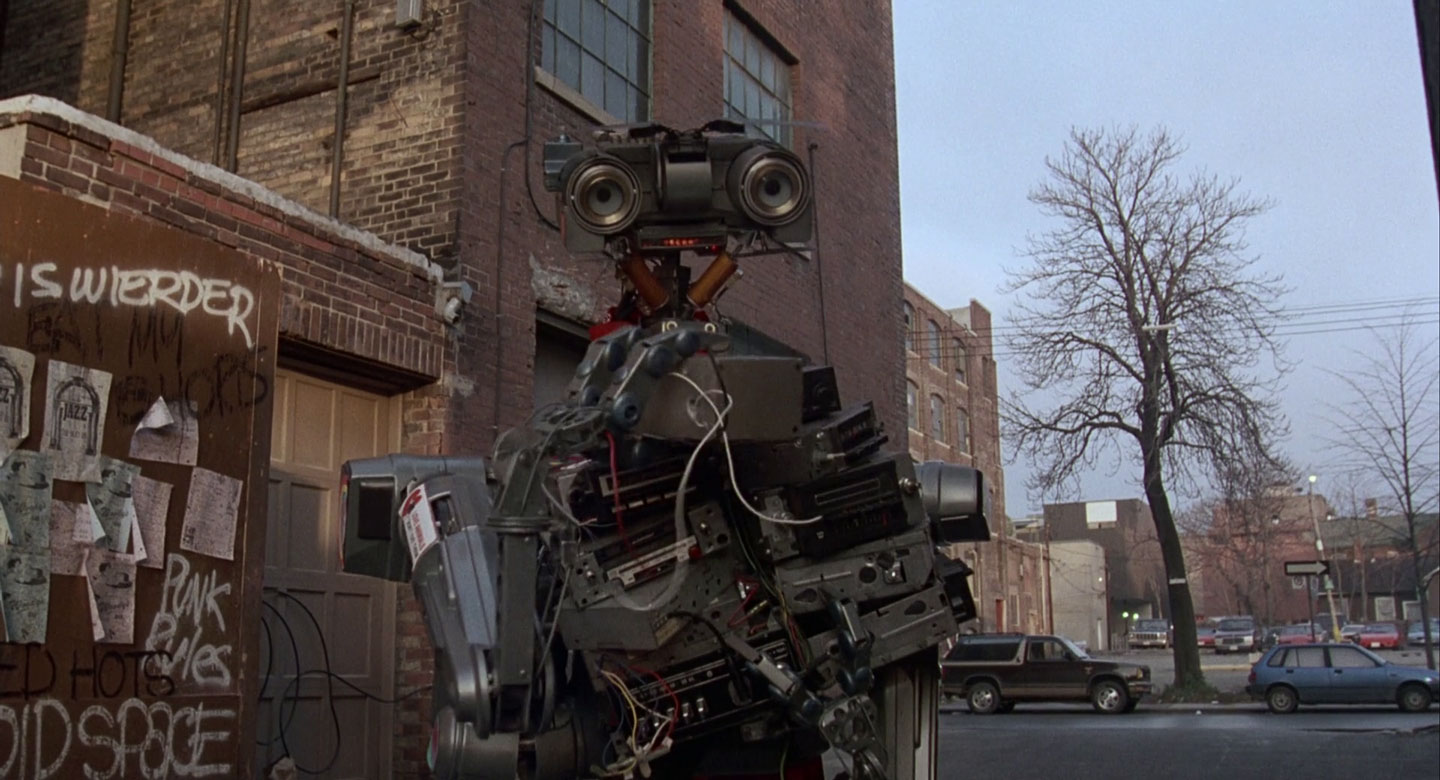 Only Fisher Stevens returns as Ben Jahveri. Which is strange because in the previous movie his last name was Jabituya. It was also mentioned that he was from Bakersfield. Yet, in this movie he’s applying for a US citizenship. He’s still the same Indian stereotype who is played by a white guy. Short Circuit 2 has not aged well from that perspective. Though Ben is probably the nicest and most sincere person in this movie.

Short Circuit 2 is a serviceable sequel. While it seems to target a younger audience, the movie does actually go to dark places at certain points. This reminds me of Watership Down. Also a movie that seems to be for kids, but does a good deal of traumatizing them.

If you liked the first movie, you will probably enjoy Short Circuit 2 as well. At least until the destruction of Johnny 5 comes on screen.