The Pam Grier movie Sheba, Baby is her third blaxploitation revenge movie after Coffy and Foxy Brown. Pam Grier is once again a one-woman-army who starts a war against organized crime after the death of a close one. First her lover, then her boyfriend. This time her father is gunned down after he refuses to sell his loan-company to some criminals. After that all hell breaks loose in this PG-13 movie…

A detour for Pam whose previous movies all received an R-rating. Sheba, Baby tones down on both the exploitation and the violence. It doesn’t abandon it, but it is not as over-the-top as in Coffy and Foxy Brown. Pam basically made a career out playing strong female roles that would often appear nude. In Sheba, Baby she actually keeps her clothes on throughout the entire movie. Even her outfits don’t emphasize her bust for once. But unlike with Foxy Brown, she didn’t have a costume designer for this movie. Maybe that has something to do with it. She does have a post-sex-scene where she’s in bed. But it’s one of those scenes that seems to have been lifted straight out of the Bold and The Beautiful.

Sheba, Baby plays it straight most of its running time. Even more than Foxy Brown did. There is only one character who actually stands out because he’s over the top. His name is Walker and he’s a classic 70s pimp. He really hams it up and is a highlight in the movie. He’s also the only comic relief character in a movie that doesn’t go for laughs. 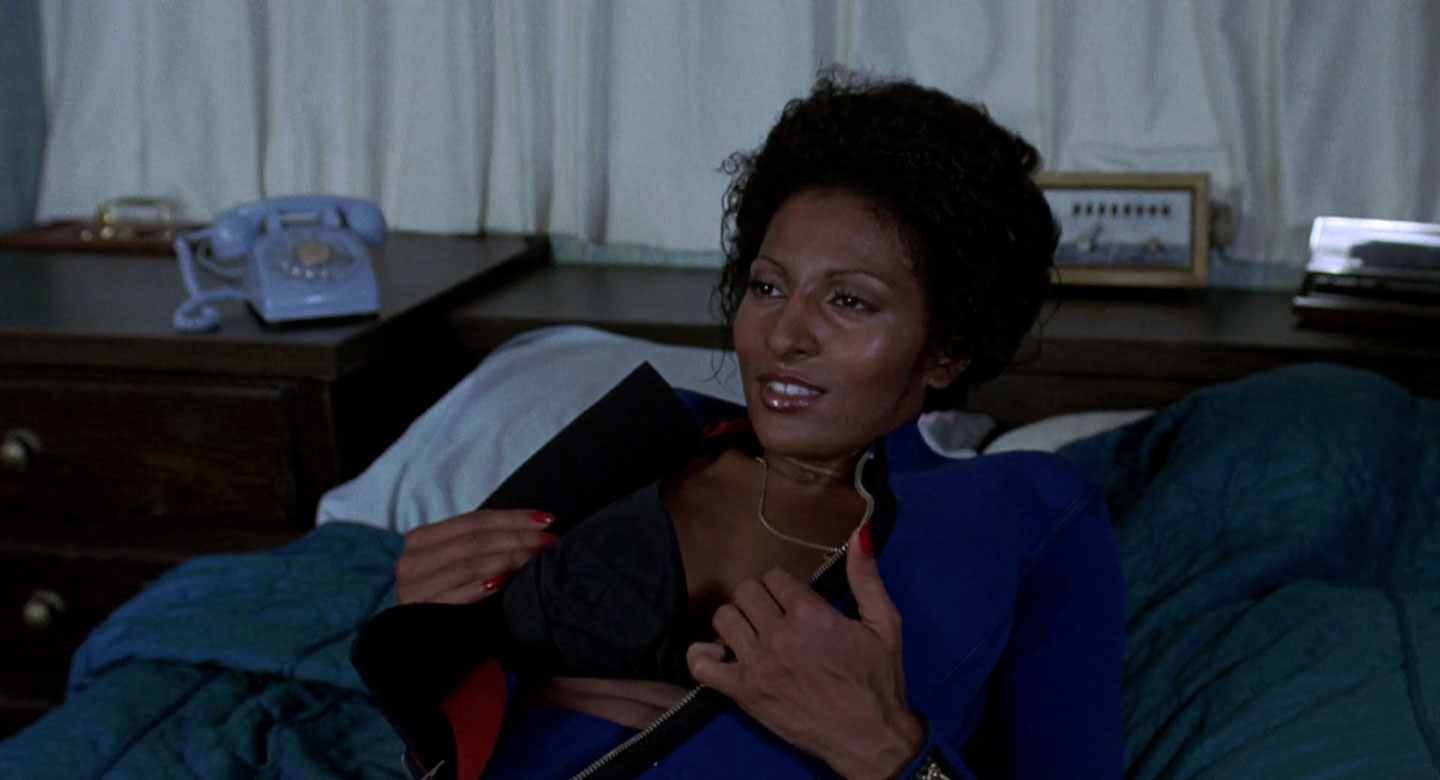 Pam Grier plays a private detective. This gives her an excuse to walk around with a Magnum in her shoulder-holster throughout much of the movie. What bugs me the most about her character is her clumsiness. She’s not very great at fighting while she does pretends to be some sort of professional. A bit of self-defense knowledge might come in handy in the private detective business. In her earlier movies she was just a nurse who went out to kick ass and take names. Which she did without her character being someone who has a background in martial arts or something like that. She must have been streetwise in those movies I guess.

But fighting isn’t her strongest suit in this one. In one scene she is walking into a steering cabin with a machine gun. Instead of firing a round she manages to get into a fight with the steering guy. He has no problem hitting her so that she loses the machine gun and beats her with ease. Mind you that this is a woman who not only walks around with a Magnum but early on demonstrates that she doesn’t hesitate to shoot. So why act this stupid now?

Stuff like this makes Sheba, Baby a lesser movie than Coffy and Foxy Brown. But it’s still a rather enjoyable movie that never pretends to more than what it is: a blaxploitation movie starring one of the hottest stars of the era.