After John Singleton bursted onto the scene with Boyz ’N The Hood the second movie in his South Central Los Angeles trilogy is Poetic Justice starring Janet Jackson and the late Tupac Shakur. But he was not a household name at the time so it was basically marketed as a movie featuring the acting-debut of Janet, who doesn’t do a bad job though even if she was nominated for multiple Razzies. The movie is about Justice who saw her first and only boyfriend being shot dead in front of her eyes and keeps to herself most of the time working as a hairdresser by day and writing poetry by night. So Justice writes Poetry, hence the title. Well she goes on a road trip together with her friend Iesha (Regina King), her boyfriend Chicago (Joe Torry) and his co-worker Lucky (Tupac Shakur). Let’s go with them on that trip…

It’s funny how the marketing of a product changes over the years. Movies featuring an at-the-time-unknown celebrity put his or her face and name big on the cover of the DVD. Same thing happened with Tupac in this movie. At the time the movie poster just featured a picture of Janet Jackson and her name. The current DVD however features Janet and Tupac and both their names the same size. In showbiz there’s nothing so variable as a unique selling point.

But enough chit-chat, back to the contents of the movie. Tupac plays a postal worker wo delivers the mail at the beauty parlor where Justice, the chick in mourning who has sworn off men, works. He tries to pick her up one time but gets blown off rather nasty. So now these two have a history for future encounters and that future is now when her friend Iesha needs to go to a convention in Oakland and she goes with her boyfriend Chicago in his postal vehicle, but guess who’s behind the wheel…
So it’s the four of them on a “fun-filled” journey to Oakland as Tupac and Janet are constantly arguing but you know how movies like these end up and by the time the end credits role they will be in each others arms. 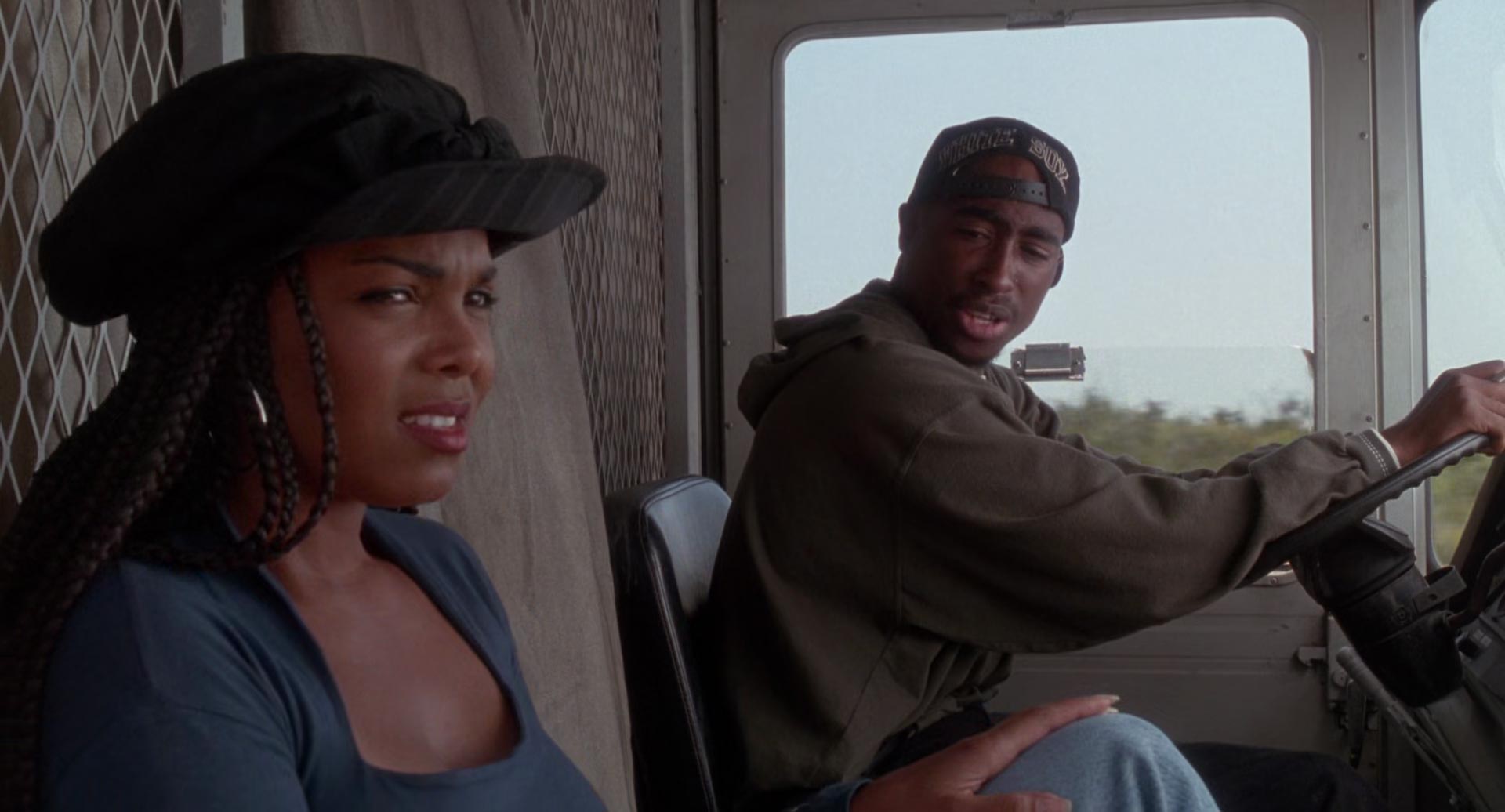 Now for most people the big surprise in Poetic Justice is the acting of Janet Jackson. And she pulls this role off as we never see her real-life persona shine through in this character she plays. Even if I didn’t like her character completely (mourning is one thing, acting like a bitch is another) she was convincing. However, the biggest revelation is Tupac. The guy proved he could act with Juice but reaches new heights here as this is a completely different character who’s layered and completely convincing.

What is less impressive is the story. This is just another one of those road trip movies in which two characters don’t get along at first but end up being the best of friends or lovers at the end. This movie does nothing refreshing to that overused plot and must have it from it’s energetic cast. There are some clever sequences in the movie like the punani line and the scene at the barbeque. I also disliked the constant poetry Janet was narrating over the movie. It just feels like a gimmick.

Poetic Justice is fun movie to watch even if it contains nothing original.