Don’t you just love those early Steven Seagal movie titles? Always two or three words long and you can put “Steven Seagal is…” in front of it and it would sound cool. Many of us, or at least me, grew up on VHS tapes. They always put trailers of other movies before the main feature as you might recall . The fun fact is that these trailers were just thrown in randomly, just the recently released movies from that studio. So it was very normal that when you put in a movie that was rated PG that you would get R-rated trailers. You pop in your tape of the Care Bears, here comes a trailer for Hellraiser. How to scar kids for life.

Come to think of it: this type of shenanigans is what made my soul go to the dark-side. That and simple Saturday morning cartoons that were spin-offs of R-rated movies. You watch the Rambo or RoboCop cartoons as a kid and everything is fun. You then watch the movies because you like the cartoons: People are tortured, blown up, limbs are thrown in your face like snowballs. Man, Hollywood sure knows how to fuck up kids.

But I’m babbling, back to the trailers. When watching a movie like Gremlins on VHS) you would without a doubt be treated to a trailer of one of Seagal’s movies. They always ended with that deep trailer voice saying: “Steven Seagal is… Hard To Kill” or “Steven Seagal is… Marked For Death“. That was just so cool. OK, so I was 12 and my worldview wasn’t that evolved yet! Today I watched Steven Seagal as he is… “Out For Justice”!

From the pre-Under Siege era this one must have the most simple plot of all. It’s basically Hard To Kill without all the coma stuff and Seagal doing this time everything on his own. No Pam Grier or Keith David this time!

Seagal’s cop buddy Bobby Lupo is murdered in broad daylight on the streets by Richie Madano. A mid-level mobster so high on crack he’s basically a loose cannon who’s gun-slinging his way through Brooklyn. Right after killing Bobby he pops another woman almost randomly. Now this is where an extra dimension comes in; is he just killing at random or does he have an agenda?

Well forget the extra dimension as this is just filler because there is not much other substance. It’s just basically Seagal with a shotgun in an unmarked car trying to find Richie. Maiming and killing a lot people in the progress. Meanwhile Richie is also driving through town. Also killing a lot of people.

Most of the movie consist of Seagal talking to the mob, Richie’s sister, Richie’s parents, a waitress, a street-vending kiddo etc. Luckily our pony-tailed warrior gets into a fight fairly easy, so we’re treated to a lot of bone snapping. These scenes play like a sort of violent ballet; beautiful and bloody. I especially liked how the meat cleaver was handled in the deli-scene. 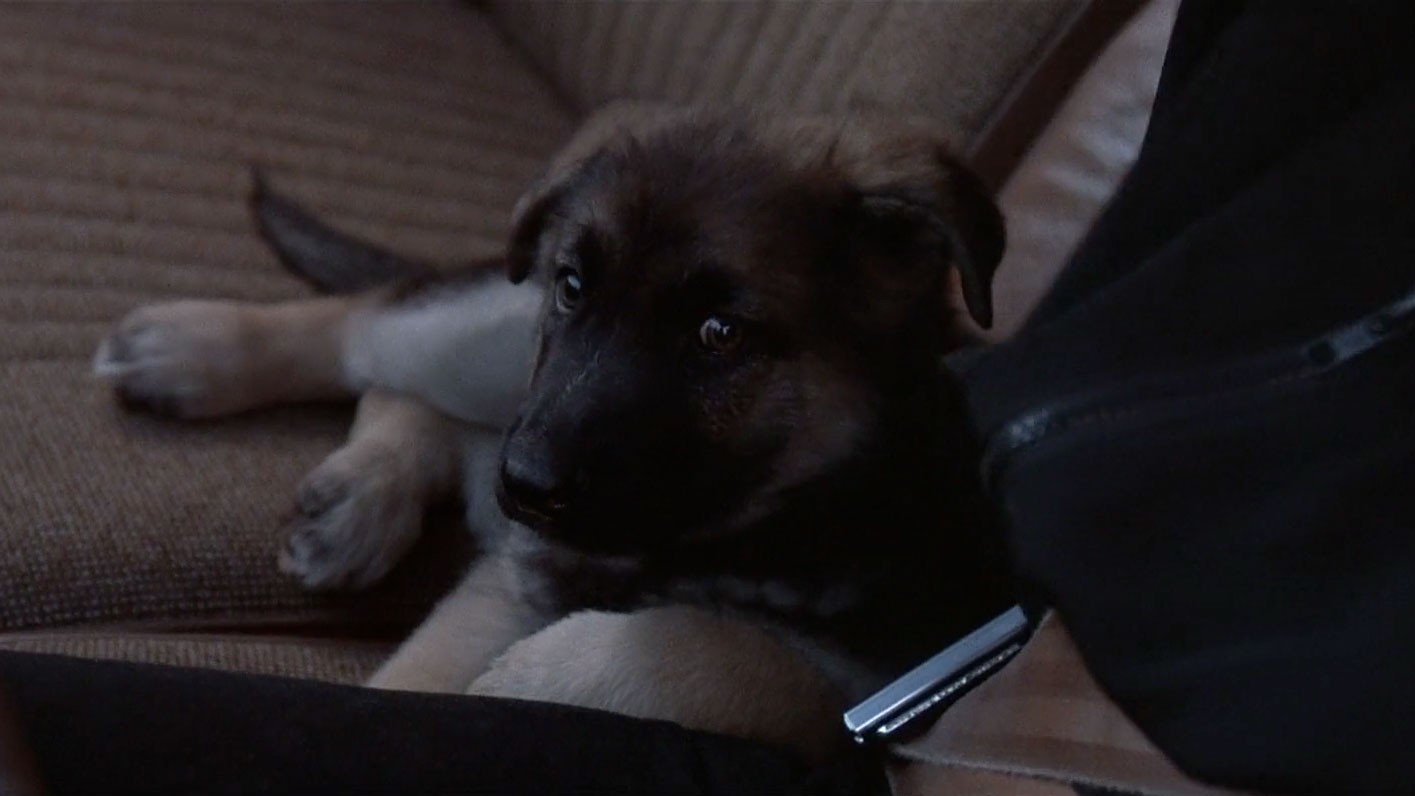 Now I did not mention the dog yet, did I? While driving around looking for Richie, Seagal sees a man drop something from his car. He steps on the breaks and investigates because that’s what cops do. He opens the bag and finds a puppy! Now he could bring it to a vet just to make sure it’s OK or bring it home right away. No he puts in the driver seat and starts chasing Richie all over town with the puppy next to him. During a car chase Seagal is driving on a really bumpy road and I just felt sorry for the puppy. Thrown out of a car and put into a frickin’ rollercoaster!

The puppy disappears halfway through only to reappear at the ending to provide a punchline as Seagal bumps into the guy who threw him out.

People have been talking about Seagal’s acting, the lack of that is, but I don’t agree. I’m from the Netherlands so I don’t hear if he gets the accent right but at least he tries. Later on in his career he just started whispering all his lines and having the same stoic look all the time. In these early films he raises his voice, tries on accents, shows emotions and actually laughs. Compared to the other action stars he wasn’t better or worse and those going into these movies expecting Academy Award material should have their heads examined. These guys spent their lifetime in gyms and dojo’s, not theatre classes!

Out For Justice is a fun movie and way better than anything Seagal makes nowadays. I suggest you whatch this instead of trash like “Against The Dark”. Oh and be sure to watch out for small cameos by John Leguizamo and Kane Hodder!