After entering the leading man status with Bloodsport Jean-Claude van Damme has gone up against some pretty tough guys. He fought Chong-Li and a variety of other skilled fighters in Bloodsport, battled his way through an entire prison in Death Warrant, defeated an opponent twice his size in Lionheart, went the distance with Tong-Po in Kickboxer and also Dolph Lundgren as a super soldier in Universal Soldier. What else could be next for the good old “Muscles from Brussels”? Well some old fat guys apparently!

In Nowhere To Run Jean-Claude plays Sam who’s a convicted felon and when the movie opens he’s on a prisoner transport. Action movie etiquette states that any scene involving a prisoner transport early on usually ends up in an attempted escape… This is the case here as a friend of Jean-Claude breaks him out of federal custody and they flee the scene. One of the guards finds a way to fire a round killing Sam’s friend, but not before he explains to us that Sam shouldn’t have taken the wrap for him killing a security guard during their last bank robbery. So Sam isn’t really an innocent man here. He might not have killed someone but he did rob banks.

Sam ends up in some small town where he sets up camp next to a lake and close to the house of a young widow named Clydie (Rosanna Arquette) and her two children Mike (Kieran Culkin) and Bree (Tiffany Taubman). Apparently the land Clydie and some of her neighbors live on is very valuable to property developer Franklin Hale, and since they’re refusing to sell he’s taking matters into his own hands by hiring an intimidation expert played by The Silence of the Lamb’s Buffalo Bill (Ted Levine). Which made me wonder if intimidation experts are listed in the Yellow Pages? You probably already know who steps in to protect the helpless widow from these bad men… it’s of course the bank robber with a heart of gold. 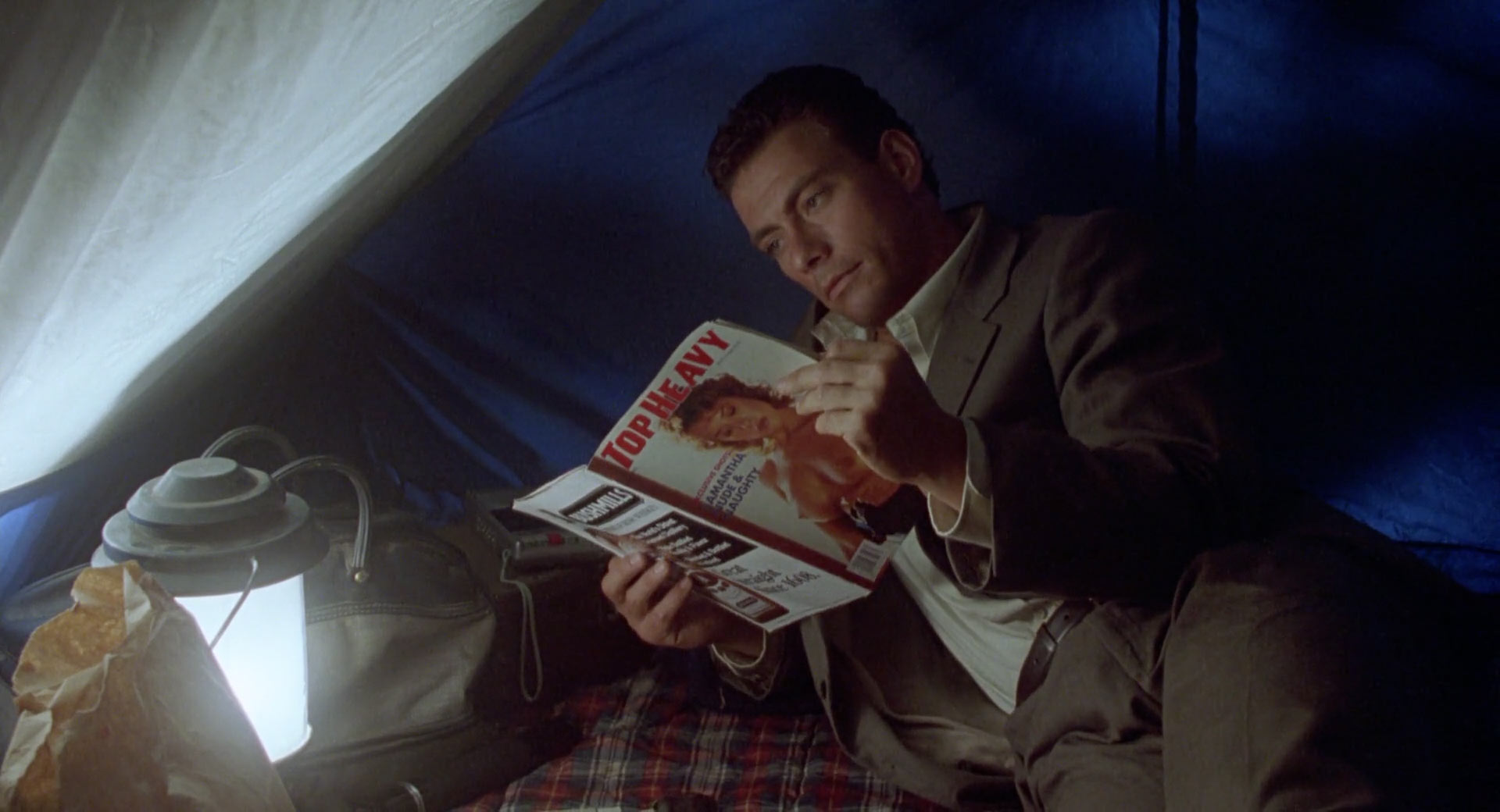 It probably has some good interviews

At first this starts off as your typical Van Damme movie. He breaks out of custody but not before punching several people. However, after the opening the movie takes a step down. The threats aren’t that serious in the beginning and Van Damme is more concerned with taking baths in a lake, reading nudie magazines and stealing stuff like salt from Clydie’s house while also doing some ‘peeping tom’ stuff as she’s taking a bath. But when the threats start getting serious Sam intervenes and he and Clydie finally meet. At first he can stay in the barn, but as the movie progresses and he becomes more of an ideal father figure to her children, also in her bed. Much to the chagrin of her fling, the local sheriff.

Clydie seems to have this peculiar way of talking to her kids about her sex life. It’s apparently perfectly normal to discuss whether or not a man has spent teh entire night in her bedroom with her ten year old. It might be me, but this struck me as kind of weird… I mean even if your child is already an adult you never abundantly discuss who you’re having sex with I guess… Not Clydie as she’s perfectly fin with discussing this this with her young kids.

What’s most surprising about this movie is the kind of bad guys they picked. Levine fits more the psycho part than that he seems be a physical worthy opponent to Van Damme. Actually none of the men in the movie seem to be a match for him. The sheriff is a wimp and Levine’s henchmen are all old, fat and gray. At one point during the climax one of these guys is chasing the young boy Mike and it actually looks as if he’s going to get a heart attack. Not that Van Damme is constantly getting into fights by the way. He’s more busy fixing a motorcycle and developing a relationship with Clydie. In a way this might be the closest thing Jean-Claude has ever done to a romantic movie.

Nowhere To Run definitely could have benefited from better casting Van Damme’s opponents. If you’re going to hire some men to strong-arm people, you should pick people with actual strong arms. The fact that they didn’t gives the movie some hilarious moments, but also weakens it. Nowhere To Run might is certainly a notch down from Van Damme’s previous movies, but still not as atrocious as the abortion that is Street Fighter.