The slasher, created in the 70’s, reached it’s peak in the early 80’s. Dead in the early 90’s until Scream came along in 1996. It’s self-referential style made it a success and gave birth to a whole new generation of serial killers donning a mask or other gimmick like a hook. Old “friends” were resurrected and were given a chance to shine again. Freddy, Jason, Michael and Chucky all did what they do best, in most cases now with a wink to the audience. Now we’ve reached remake territory since simply putting out a follow up sequel doesn’t do it anymore. We get reimaginings, reboots, remakes and what not. The Texas Chainsaw Massacre, The Hills Have Eyes, Friday The 13th, Halloween, The Amityville Horror have already graced the screen. A Nightmare On Elm Street, Last House On The Left, Child’s Play and Hellraiser remakes are in the pipeline. Lesser known movies are also now the target of an easy cash-in on times long forgotten. Today I’m taking a look at My Bloody Valentine 3D… which I actually watched in 2D.

I’ve seen the original a couple of years ago but nothing much has nested itself permanently in my brain, I can recall the thing just barely. Don’t expect a comparison from me. I do remember that one also dealing with a murderer in a miner’s outfit and the shameless copying of the heavy breathing made so famous in Halloween.

So here’s the laydown of the plot or what there is of it. In a mining accident 5 miners get killed, one is in a coma: Harry Warden. He’s suspected of murder because the corpses showed signs of a pick axe being used on them. This is presented to us through one of Horrors new montage tricks: newspaper clippings over the opening credits. We’ve seen this before in The Texas Chainsaw Massacre remake and Wrong Turn. Since Harry isn’t actually responding to questioning he just spends his time laying in a hospital bed until after a year he awakes. Unlike Mason Storm in Hard To Kill or Beatrix Kiddo in Kill Bill, Harry doesn’t seem to have any muscle dystrophy and actually kills the entire hospital population. He even manages to be creative with some corpses. Harry sure is talented, in a disturbed sort of way.
Harry goes back to the mines and puts on his miner’s uniform only to discover a couple of local teens were having a party there. Harry of course doesn’t take a liking in this and with his axe starts a little mining on the teens. Four manage to survive, one of which is the son of the owner of the mine. He barely survives as Harry gets shot by the police before he could deliver a deadly blow.

Skip 10 years in time. The teens have no grown up: Tom Hanniger, son of the mine-owner, disappeared after the incident and returns after his fathers recent death. Sarah Palmer now runs a store with her only (or so it seems) employee: Megan.
Axel Palmer became the town sheriff and is married to Sarah. He also fucks Megan on a regular basis who he promises that he’ll really tell his wife soon about them. She tells him on Valentine’s day with great joy that she’s pregnant from him. What a dumb child, too bad this isn’t just lousy writing but actually happens. Girls, if you’re reading this: if you’re fucking a man who’s in a relationship or even marriage and he constantly tells you he’s really going to leave her and start a future with you he’s lying. You’re there for the excitement, nothing more.

Well got that of my chest, now let’s continue. Precisely 10 years after the Valentine slaughter the pick axe gets picked up again and the towns population starts steadily declining once more. Is Harry Warden back, or is someone else doing a little copycat killing of his own? If so: who then? Stay tuned to find out! No, I’m not going to spoil it for you but since the movie presents you just 2 suspects it’s really a 50-50 chance of guessing it right. 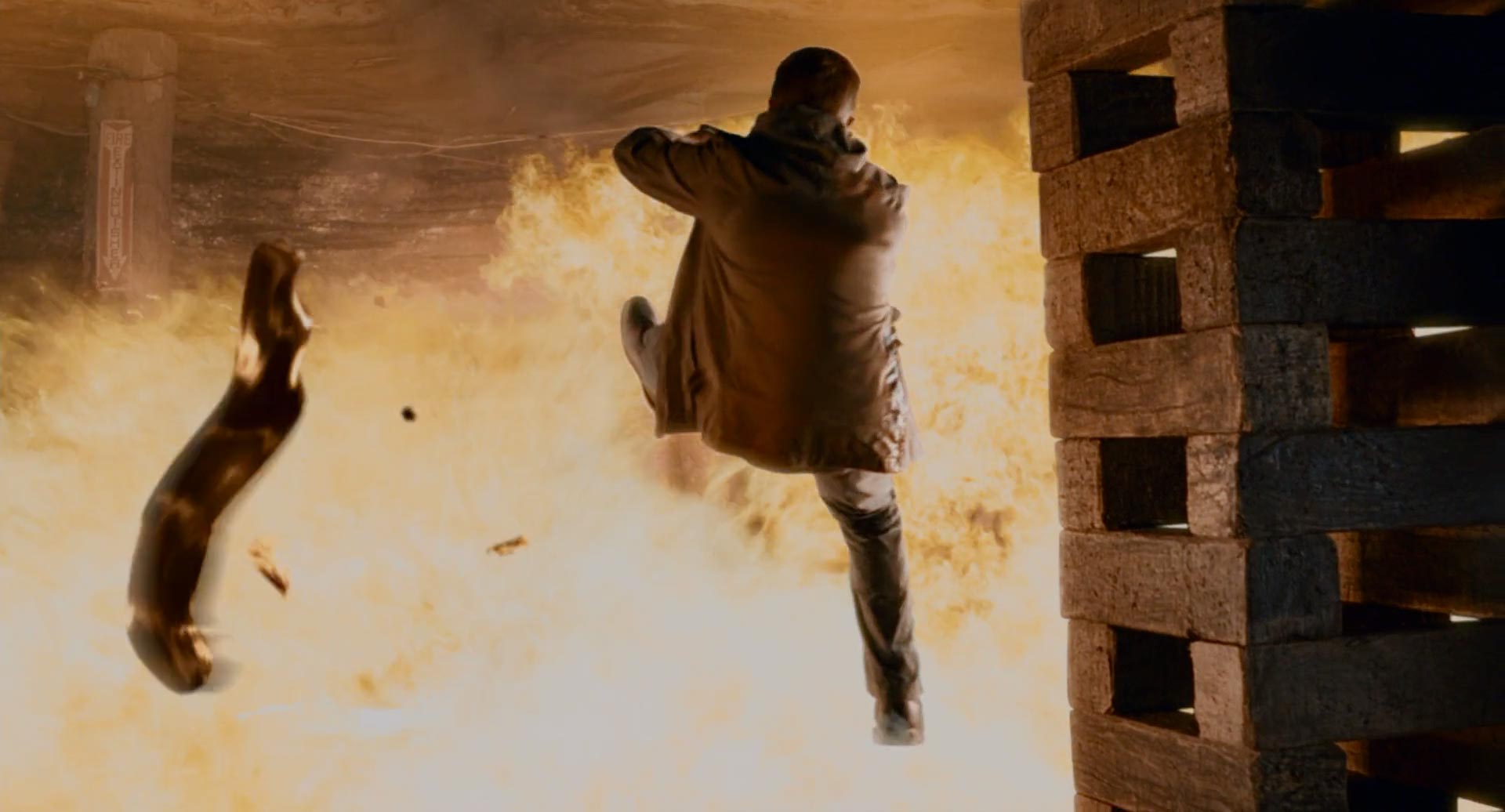 Working in a mine: it’s a blast

This movie brings actually nothing new to the table other than higher production values. The movie could’ve easily been released in the 80’s and all people will mention is that the effects look pretty damn good and that the movie looks polished. Maybe they’ll mention the mobile phones and handycams also but my guess is that they’ll probably be too busy drooling over the gore and the nudity.

Story-wise there’s nothing new here. Even the self referential elements, so popular a few years ago, are gone. These remakes all really try to stay true to the atmosphere of the original and that means there’s no laughing at itself anymore. As if slashers in the 80’s didn’t do that. Just take a look at Friday the 13th Part VI – Jason Lives for some pre-Scream self-referentialism.

The killings are down to earth, almost all of them being done with a pick a. Our miner probably doesn’t gave access to a tool-shed. Which is a shame, because tool-sheds are like doctor-bags for serial killers. So we just get pickaxes through the head, eyes, chin and the chest mostly. They’re done with rage to compensate, but in the end it’s a bit tedious. These movies are mostly about creative kills instead of suspense, so not delivering on both of them is not done. 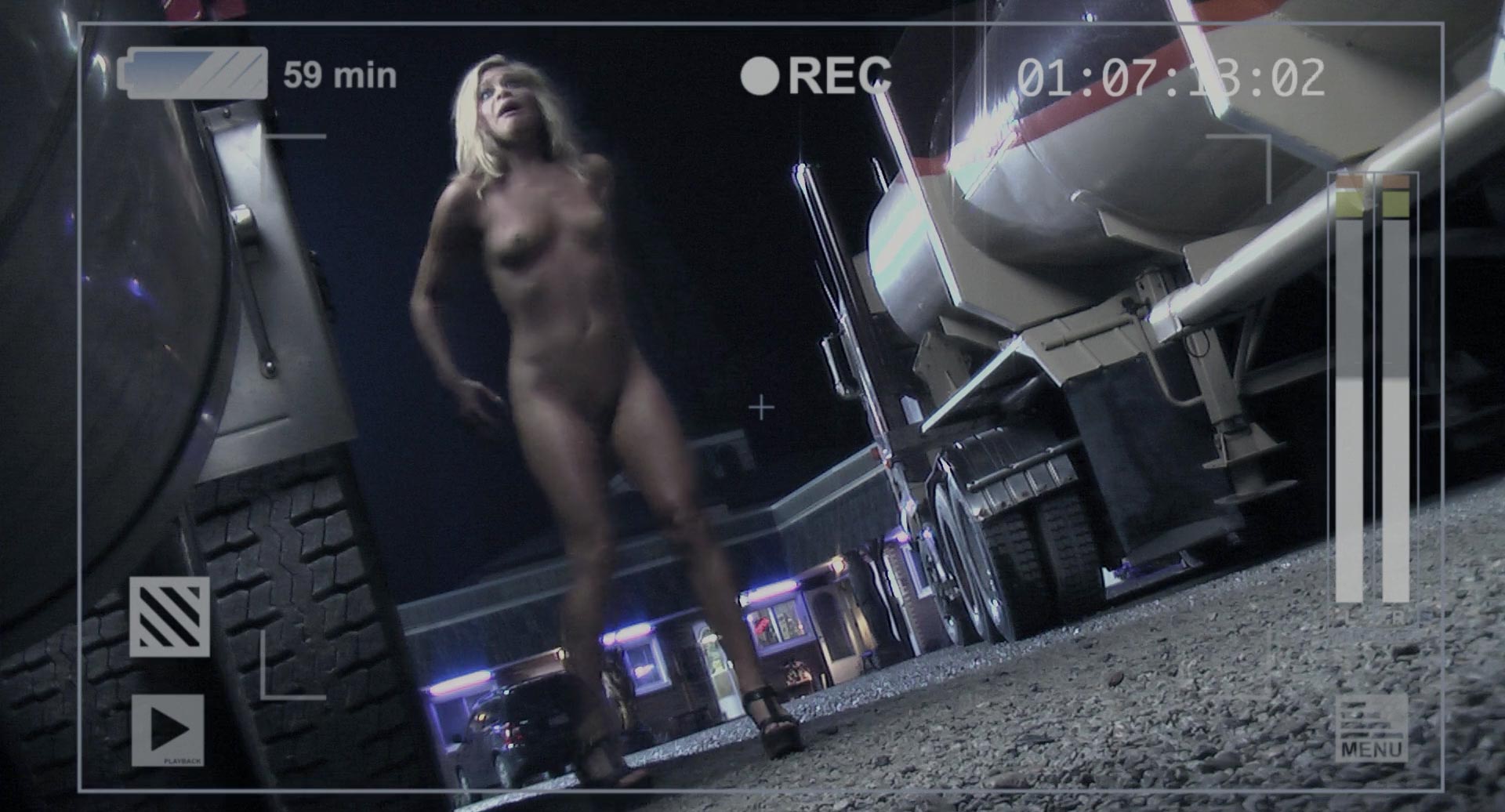 Sweet! This camera can record over two hours of footage

One of the returning factors in these movies is nudity. Especially in the beginning of the slasher hype you would always have scenes of thing like people skinny dipping (at night!) for no good reason other than to show the audience some gratuitous nudity. That changed when the MPAA started ordering cuts on nudity and gore and movies became butchered and really tame. Luckily times and morals change so today you can put nudity in and receive an R-rating. Or you just release an unrated version on DVD later on.

So how about the nudity then? Well it ignores the rule that everybody who’s going to the meat-grinder anyway shows off his or her body but there is one sequence in which that happens and it was really memorable. Irene (Betsy Rue), one of the 4 survivors, is having sex with a random trucker in a motel. So far it’s your basic sex scene. He’s done with her and gets dressed. This is when she notices that he videotaped the whole ordeal and she demands him to give her the tape, because before you know it you’re on Youtube, or Porntube in this case. When she demands this she’s standing their full frontal naked. Now if this was just it it wouldn’t really noteworthy, but the trucker goes to his truck and she follows him with a gun and nothing more on than a couple of shoes. The camera does not shy away from her entire physique. Well ground rule #1 of these films is that the murderer shows up and before you know we’re watching a completely nude woman in a chase and fight sequence with the killer. It seems the nudity barrier is shifting nowadays. 20 years ago a couple of tits were enough to make the director butcher his movie to make it suitable for a mass-audience, today it seems to be no problem to show complete orgies like in Donkey Punch. I don’t mind though.

Now I’ve mentioned the gore which with the aid of CGI looks elaborate. But like most CGI-gore scenes, it looks a tad too slick, unnatural and polished to be convincing. In a rare case where a shovel is used instead of a pick ax to split a head in two the sliding of the top part of the head on the shovel blade is really unconvincing. I don’t even think that a head will slide when that happens but my guess is as good as yours. Just don’t go out and try it! 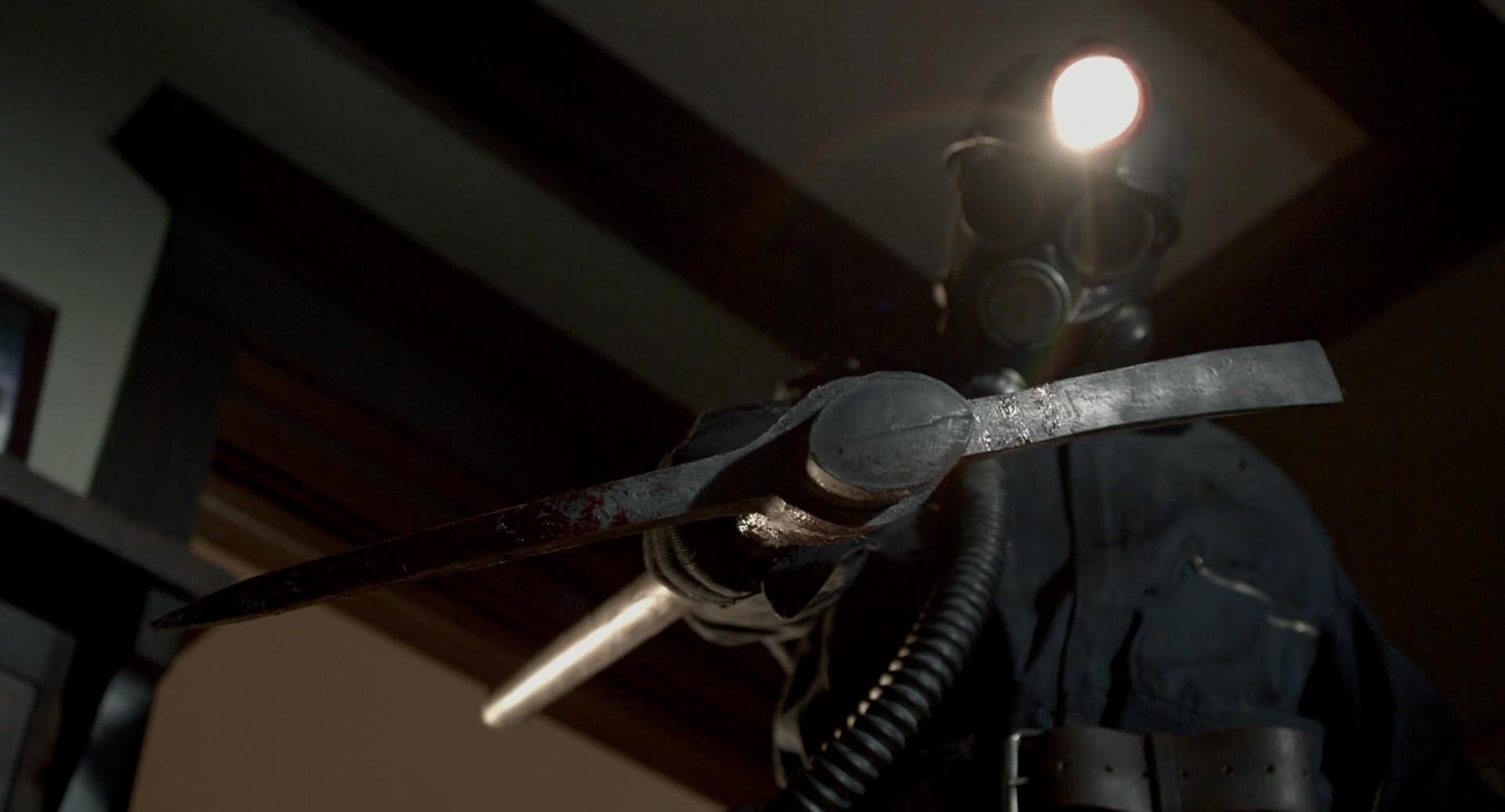 Can I ax you a question? Why are you picking on me?

I’ve watched this in 2D. I’m probably missing a part of the experience then, but a good movie doesn’t need a gimmick like that to elevate itself to a higher level. Without the gimmick the movie would’ve probably been released straight to DVD, at least here in Europe. The 3D gimmick as also something we’ve seen before over the pas couple of years: the finale in Freddy’s Dead: The Final Nightmare and in Friday The 13th Part 3. That last one and this movie share the fact that the entire movie consists of scenes which are set up to take advantage of the 3D effect. These scenes and effects look artificial when watched on a normal screen. Then again they do too when viewed with 3D glasses.

This movie’s not great and a throwback to the 80’s slashers which does make it for a nostalgic treat only more polished. Compare it to the tune up George Lucas gave his original Star Wars movies. The casting and acting is what you would expect from movies like these: mostly fresh faces who’ve just had their first lessons in acting school. As a fan of the 80’s slashers I liked the movie in the same way I like those films. It isn’t perfect but luckily it turned out to be a gore-fest instead of a bore-fest.