My Big Breasts And Me is a documentary about women who have been “blessed” with the “natural wonders” of (really) big breasts. Made by the BBC the movie informs us that the British women have the largest breasts in Europe. Every breast enthusiast will probably confirm this as a lot of all natural big breasted glamour models come from this country; Kerry Marie, Linsey Dawn McKenzie, Faith Nelson and Rachel Aldana are all prime examples of well known models who sport more than a G-cup. For your info, the average size in Great Britain is a C-cup. While these girls use their breasts for financial gain, the documentary covers the lives of a couple of women who have more problems of their enormous breasts than they have advantages.

Jody is a young girl sporting K-cup and is thinking about breast reduction surgery. She enjoys the attention to a certain degree but isn’t all that pleased about being constantly referred to as the one with the big boobs. Of course her breasts generate a lot of attention leading to remarks from friends about how they would love to trade their small breasts for an enormous natural bosom any day. They get the opportunity when they go out with Jody with one of her bras on filled with a similar weight as the 2 kilo a piece breasts she has. It turns out that the attention is fun at first but gets annoying after a while, not to mention the weight that is put on their shoulders which have to carry this load. 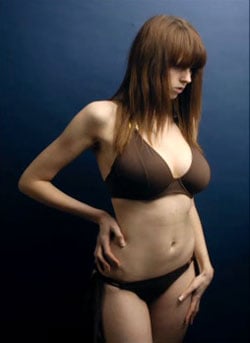 Maddie is only 19 years old and her breasts still haven’t stopped growing. At the moment she has a G-cup though she is unaware of that because like most women she wears bras that are actually too small and don’t support her breasts the right way. She aspires to be a model and after finding the right bra she goes to a test shoot for a lingerie company that specializes in larger cup-sizes.

Vicky is a young mother who’s also in possession of a G-cup. She hates her figure and is ashamed to go out in a bathing suit and chooses to stay next to the pool all day instead of going in the water. She’s trying to slim down by exercising hoping that her breasts will increase in size as well. She is the only one of the three who could be described as being overweight. So her breasts, despite being big, are in relation to her figure, while the two other girls seem to be piling up their fat reserves merely at a chest level. 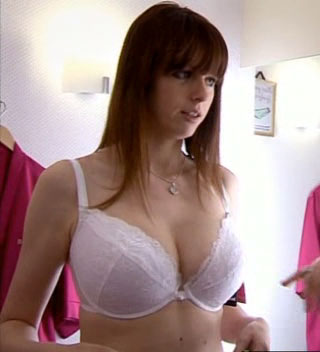 A couple of other people get to shine a light on the problems these supposed gifts provide. A psychologist explains how women can get a negative self-image because their breasts are so enormous instead of a confidence normally associated with big breasts. They provide a certain status amongst celebrities and models, yet they also create a prejudiced opinion about women who have them. They have to deal with the fact that their breasts have become their identity. There’s also a plastic surgeon who explains that reduction-surgery isn’t as easy as an enlargement and that surgery will no doubt leave the patient with scars on their breasts.

Though these problems are not new to me it was enlightening to see these problems actually presented on screen. I never knew reduction surgery was this extreme and see how you must really be desperate when you result to do this to your body. It’s really strange to see that in a society where bigger is better and there is a certain status to big breasts, women blessed with them naturally actually feel ashamed by them.

The only thing was missing from this documentary was one or two women with large breasts who don’t have the problems these women have. I would have love to see some models like Rachel Aldana, who was crowned “Biggest boobs of Britain” once, tell about how they deal with their enormous assets. These girls make their money of their breasts, it would have been interesting how they deal with the pain and if they have ever felt ashamed of their breasts.

A decent and interesting documentary which deserves an extra star for all the functional big boobs shown, because in the end I’m still a guy.

My Big Breasts And Me