Compared to other video game movies released around the same time Mortal Kombat is pretty decent, but that’s not saying much when you consider movies like Super Mario Bros., Street Fighter and Double Dragon are making up the majority of the bunch. As a martial arts movie it’s pretty bad and it makes other tournament movies like Bloodsport look like The Godfather in terms of quality.

There is another dimension ruled by an emperor who wants to invade Earth, but to do so he has to have 10 wins in a row in an inter-dimensional martial arts tournament named Mortal Kombat. His followers Goro and main nemesis in the movie Shang Tsung are responsible for 9 wins in a row making this the all or nothing tournament for them. Defending Earth are Lui Kang, Johnny Cage and Sonya Blade, who don’t know what they’re getting themselves into and are under the guidance of the lord of thunder: Rayden who is played by Christopher Lambert who delivers his lines so wooden it’s a miracle he never got cast to play an Ent in the Lord Of The Rings trilogy.

During this tournament they fight a wide variety of characters of which most of them come from the arcade games; Kano, Scorpion, Sub-Zero, Reptile and Kitana. All pretty faithful to their computer game originals. In fact the whole movie keeps it pretty close to the computer even if that involves Ninjas creating ice and Scorpion revealing himself to be a walking corpse with the ability to breathe fire and shoot harpoons from his hand. 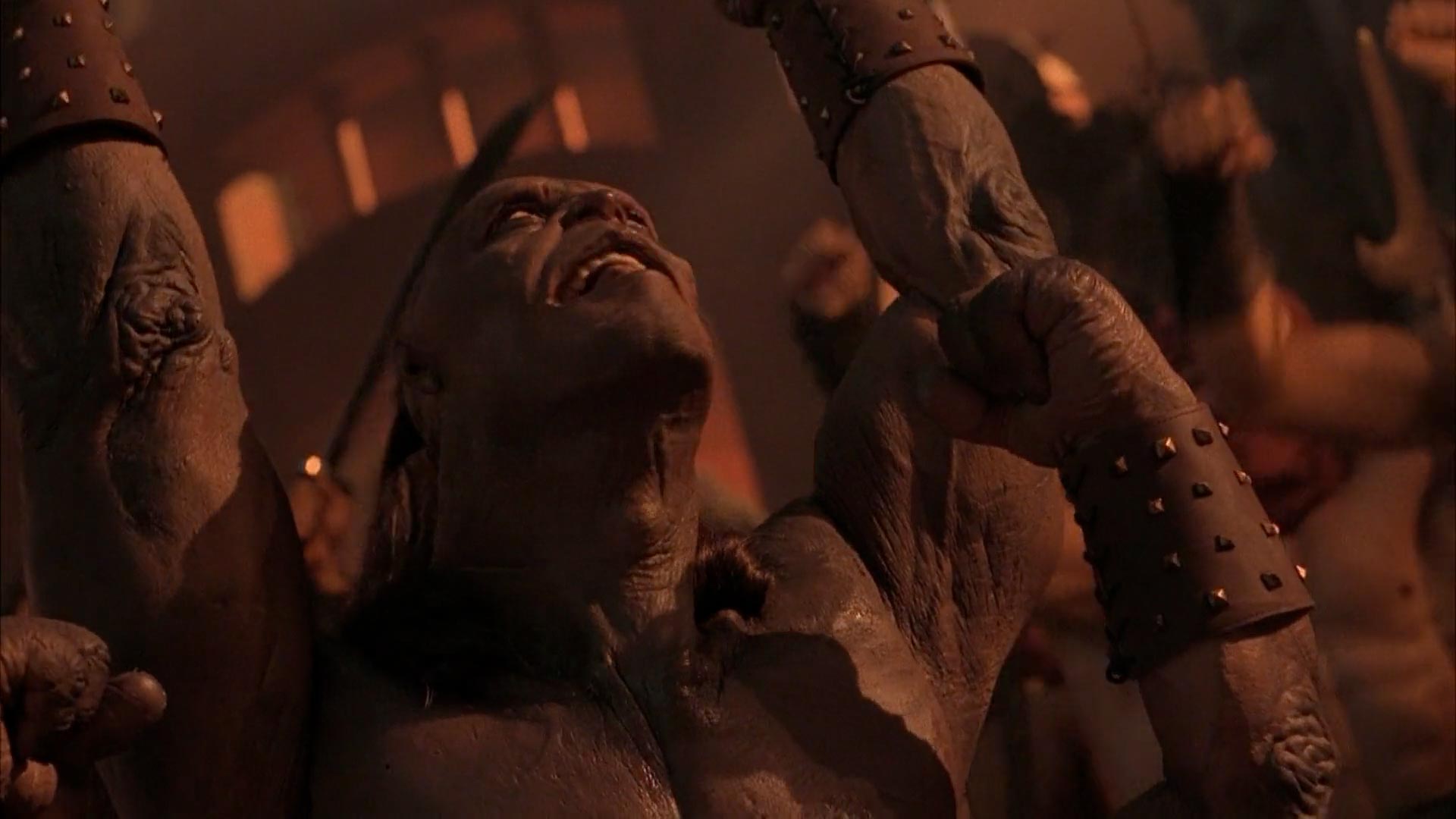 But that’s all that Mortal Kombat has to offer in terms of positive notes. This is a cringe-inducing movie full of moments that make you ask yourself: “what were they thinking?” First of all the casting: none of the actors delivers a decent, let alone good, performance. I already mentioned Christopher Lambert who’s the biggest name in this cast, but he’s surrounded by Robin Shou (Liu Kang) who sports more hair than all of the female cast combined, B-movie veteran Linden Ashby and a Miss Teen USA (Bridgette Wilson). Needless to say none of them give a memorable performance though Linden Ashby does have a couple of fun moments. Sadly the use of these people means that other than Shou, none of the main character possess any fighting skills nor does it seem that they at least did some extensive choreographing. Fight scenes lack any sense of excitement, even when they involve a man being stuck between Wilson’s legs. Charismatic martial artists: it’s what makes a movie like Bloodsport work so well.

But one of the most annoying flaws are the special effects. One might wonder how many special effects a simple tournament movie like Mortal Kombat should have but considering the supernatural aspect apparently a lot. This movie was released when movies like Terminator 2, Jurassic Park and The Mask wowed the world with their effects and so a lot of scenes involve Computer Generated Imagery. Too bad it’s of a very low quality thus never convincing let alone seamlessly integrated. Scorpion’s spears which emerges from the palm of his hand is a laughable effect as is the creature called Reptile. Any scene involving him is terribly fake. The only cool effect is the creature Goro, and while he’s obviously an animatronic that fact that he is actually in the scenes with the other actors make him the only realistic and somewhat menacing figure.

Mortal Kombat is a bad movie who should only please the fans of the video game, but they’ll be missing out on all the signature gore that made the game so popular. There are hints to the video game violence and Scorpion does his fatality but overall this is a rather bloodless affair. While better than most video game movies made in the 90’s this is still an ideal contestant for a bad movie tournament