In Scent of a woman Al Pacino’s character rants, in a way he would do many more times after that, “This is such a crock of shit!” These words, in the same tone and manner, can be applied to “Mega Shark vs Giant Octopus”. But, to be honest, that’s to nobodies surprise. So the question is not if it’s a crock of shit but rather how much of a crock of shit it is. Or even better formulated: is it a worse crock of shit or rather better than one would expect from a movie with a title like this?

The title says it all. Two enormous prehistoric beasts, frozen in ice, escape from their tomb after 18 million years. Immediately these creatures venture through the world’s oceans and start wrecking havoc. Planes are being grabbed in mid-air by the most powerful jaws on the planet. Oil rigs are being destroyed by the longest tentacles on the same planet. As you can see, these beasts are really competitive which will eventually result in a battle to the death and give the “vs.” in the title its meaning. 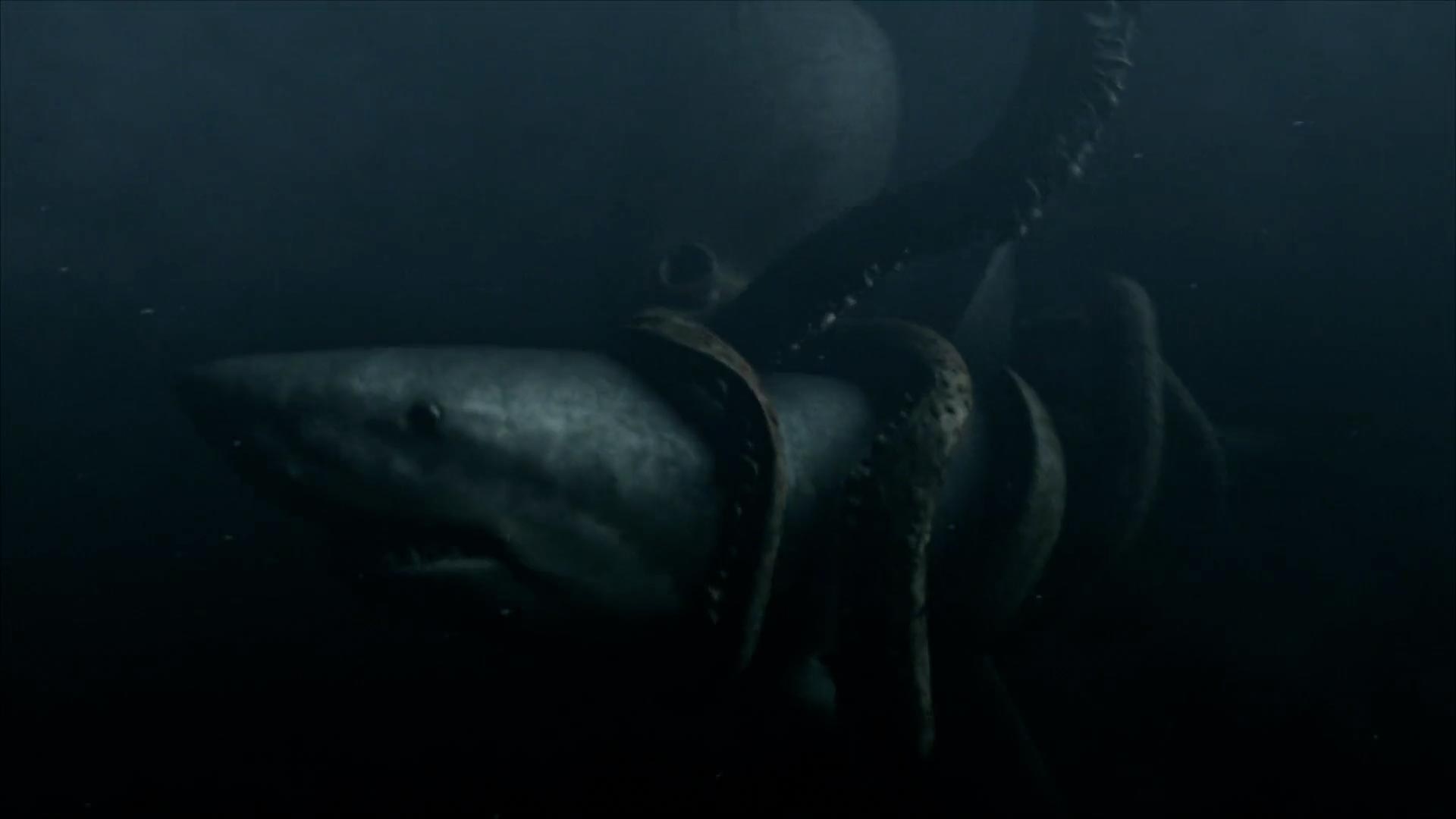 One of the two beasts is identified as a Megalodon. A gigantic prehistoric shark that could grow to more than 18 metres long. Now in this movie the Megalodon is even bigger than a submarine and it looked as if it was even possible that it could swallow a submarine whole. Which would give the shark problems with his digestion I guess. Now in reality the average navy-submarine, you know, the U-boat-kind, have lengths up to 175 metres. See where I’m going with this?
The squid octopus is large enough to punch fighter jets out of the sky and is as large as an oil rig.
So you see, this is the kind of believeability this movie has, but did you expect more from a movie dealing with a battle between a giant squid octopus and a shark?

The movie starts out ok actually. We get treated to beautiful scenery of snowy mountains and underwater wildlife which is obviously stockfootage. These scenes are situated around Alaska, yet there are Hammerheads, Manta Rays and Seaturtles on display here. I might not be a marine-biologist but somehow I don’t think these animals belong in this region of the world.

As soon as the credits are done rolling we’re treated to bad cgi of glacier collapsing which really made me wonder. Couldn’t they’ve used stock footage of a glacier collapsing? There’s tons of that available and that actually looks real, mainly because it is real of course.
We are also introduced to the star of the show: Emma MacNeil, played by Deborah Gibson. She’s one of those rogue scientists. You know, the kind that steals borrows a mini-sub to go out and do some unapproved research. When the corpse of a whale strands on the beach she is called to investigate and soon discovers that these bite marks are from something with really big teeth. She knows this because she fairly easy spots a giant teeth in the wound, hours after other people have been examining the corpse. They need a Grissom.
But she is taken of the investigation and fired because of her behaviour earlier with the borrowed submarine. In the mean time the giant squid octopus attacks an oil rig near Japan. Our newly jobless scientist meets up with her old professor and they start doing some investigating on the tooth and come to the conclusion it’s a Megalodon. Which actually is greek for “Big Tooth”. They’re joined by a Japanese scientist who’s investigating the squid octopus attack and before you know it they’re all forced to help the US government destroy these critters by government official Allan Baxter (Lorenzo Lamas). 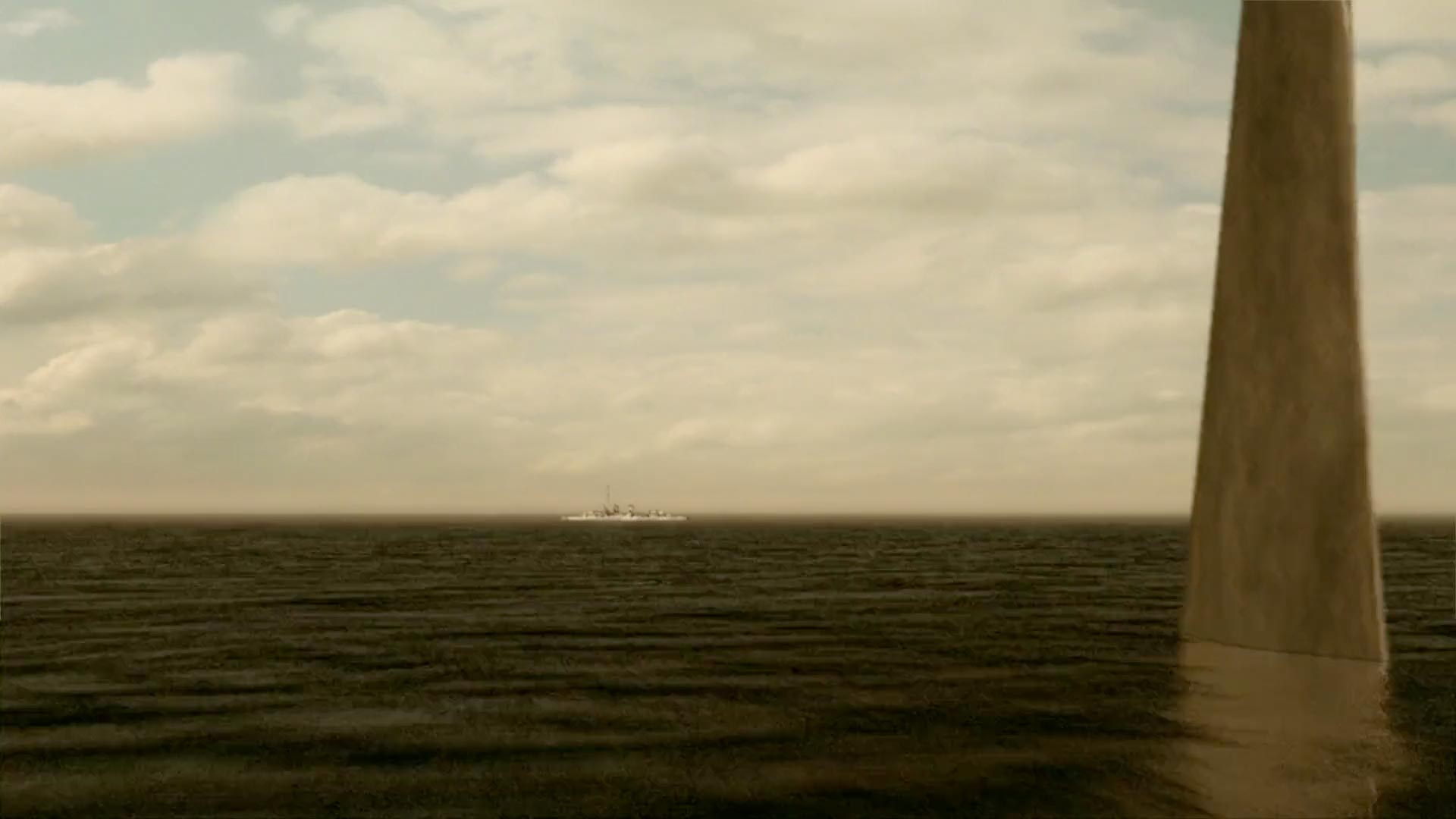 Bad CGI in all its glory. And we get treated to this shot no less than 4 times

Now this movie is full of stupidity other than the already mentioned things. These animals have a thing for metallic objects. Never do we actually see them hunt some organic prey. No they’re to busy destroying naval fleets, submarines, oil rigs, fighter jets, airplanes and the Golden Gate Bridge. During this we get to see a lot of recycled shots. I think that at least ten times we see a shot of the shark coming out of the dark directly to the camera and swimming past it. The whole movie actually consists of shots being repeated over and over again like stockfootage of a battleship from a birds eye perspective for instance. There’s also a scene where the shark attacks this battleship. No less than 4 times do we actually get a shot of his fin going underwater while he swims towards the ship. This battleship also fires at the shark of course. No torpedo’s but rather with the firepower on the deck. It’s like shooting with lead shot at an elephant from a pretty lenghty distance. The ship gets eaten of course.
It’s funny that the shark attacks a battleship: In the 1957 monster-movie “The Giant Claw” the monster, a giant bird, is constantly described to be as big as a battleship. Seeing what Megalodon did with a battelship in this movie he will probably eat that bird for breakfast, after grabbing it from mid-air of course. Maybe they should introduce a metric-system in monster-movies measuring the creatures in battleship units.The Giant Claw – 1 battleship (bs) big. Mega Shark – 12 bs big. 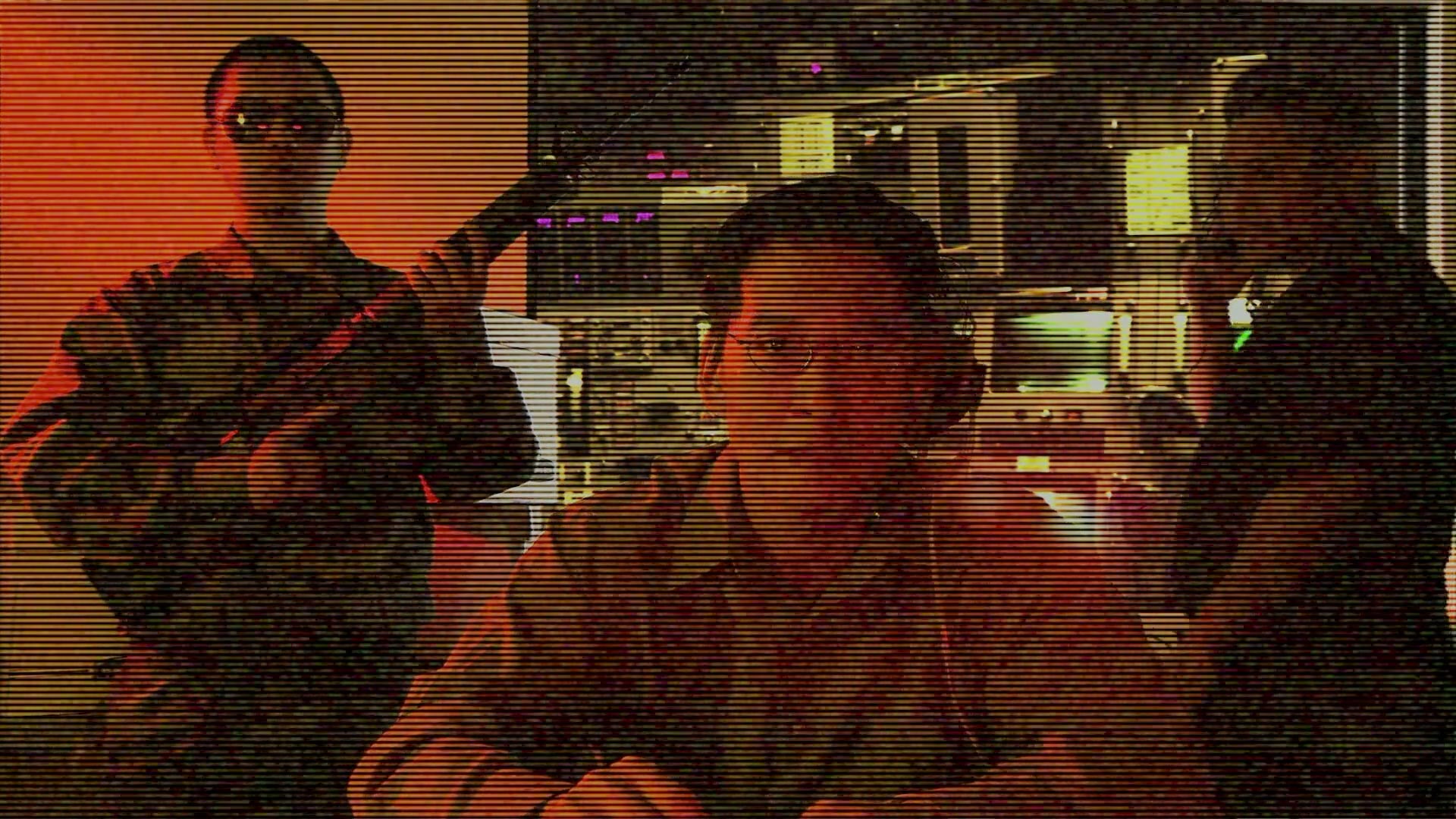 There’s unintentional hilarity everywhere, like at the “Treasure Island – US Naval Air Command Station”. Not only does this base look like a factory long shutdown, it’s also necessary to show us the location, namely “Treasure Island – US Naval Air Command Station” every time we see a shot of the base. Every military object, whether it be a submarine, navy vessel or “Treasure Island – US Naval Air Command Station” has in basically every frame a shot of a marine holding a rifle. At one moment one of the scientists talks into a camera with the other scientists. A meter or two behind him is another one of these guys with his rifle and sunglasses. Maybe he’s there to shoot the scientist if he would happen to reveal some highly classified to the other side. It made the scene look like a scene from one of those Al Qaida beheading-videos only set in a more sophisticated environment. 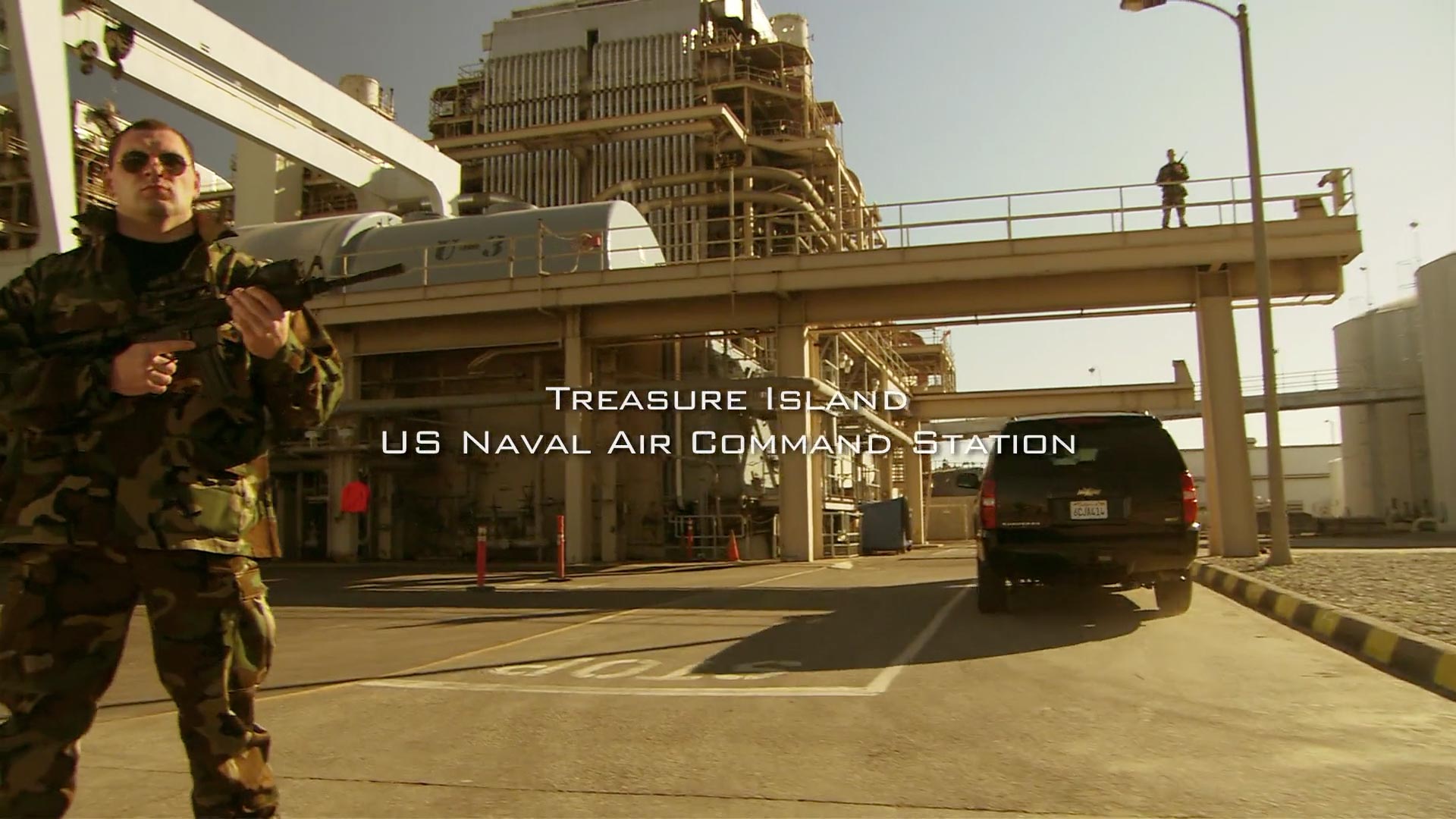 I could go on and on. About how after having sex the two scientists come up with a brilliant plan of using pheromones to lure the creatures, and how this pheromone is glow-in-the-dark green. Something to put on my things-I’ve-learned-list. Another thing I can add to that list is that Megalodons are faster than jets and are bulletproof.

This is a bad movie, a crock of shit, and it’s exactly the crock of shit you expect it to be. It’s better than most Sci-Fi-Channel movies like Boa Vs Python, but that’s not saying much. Watch it to feed your curiousity and nothing more. The movie takes itself too serious and injects too little intentional humor.
At the sight of the stranded whale a scientist says “What a mess”. I’m sure he was talking actually about the movie.