Even with a title like this it still always a surprise what you’re gonna get. It could be a great movie like Shaun Of The Dead, but then again you could also get another Zombie Strippers which nobody is actually waiting for I guess. It’s also a surprise as the title could refer to the vampires who are lesbians or the killers who might be lesbians. Well to answer that question directly: it’s the vampires. So let’s sink our teeth in this little movie.

Don’t worry folks, Lesbian Vampire Killers does not go down the road of Zombie Strippers but rather Shaun Of The Dead. Quite literally actually. It’s from the same country, it has the same humor and even the plot set-up is copied from Shaun; Boy gets dumped by girl and then runs into Vampires instead of zombies. Even the casting is similar: there’s Jimmy (Matthew Horne) who is taking up the Shaun role here of getting dumped by his girlfriend and being the leader of the group. There’s Fletch (James Corden) who is the chubby best-friend of Jimmy who is a lowlife with no goals in his life or a girl. He is the Ed of this movie, and the only thing missing was an impression of an Orangutan. And there’s Lotte (MyAnna Buring) who’s the blond love-interest of Jimmy and is in a weird twist of events not his ex-girlfriend but rather the only survivor of a group of extremely hot girls traveling around the country in a Volkswagen Hippy Van. She’s the Liz of this movie. Even the pose of the two heroes on the cover has been ripped off a similar image of Shaun, Ed and Liz. This movie really, really wants to be Shaun Of The Dead, which is admirable and better than wanting to be Zombie Strippers but the trick is not to make it so obvious.

OK, so the movie starts off with one of those dead serious unnecessary prologues in which a whole back-story is delivered for the villain of the story and in this case also a mark the future hero will have. You guessed it, Jimmy has that mark! So this serious prologue ends on a joke and that sets us up for the goofy shenanigans we’re going to watch for the next 70 minutes. We are introduced to Jimmy who’s getting dumped again by his on-off-girlfriend and Fletch who gets fired once more for punching a kid while performing as a clown at a kids party. Only 10 minutes in the movie it occurs to me that every woman in this movie is incredibly hot. That’s not a bad thing.
In this moment of depression the two lads decide to go on a hiking trip in the country side of Gragwich. It’s in this small country village where they first witness four incredibly hot women coming out of a tavern in slow motion. Needless to say they inform in the tavern where these ladies are going and the bartender is so nice to tell them exactly. Hey is even as nice as to give them everything they order for free. Could this be some sort of a “last meal” and are they heading for certain doom? Damn right you are, as the directions they’re given lead to some sort of a hostel where they will end up as food for all female vagine loving blood suckers. 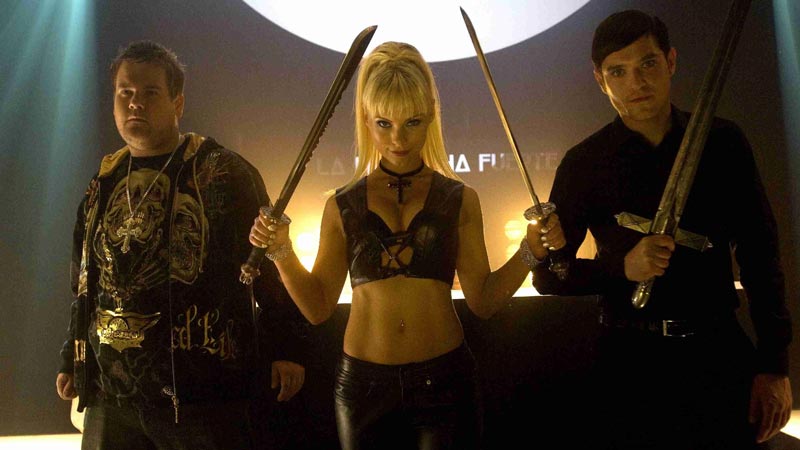 Even though this movie clearly rips off Shaun Of The Dead and is not that good it still is fairly enjoyable. The team behind the production really went to the effort to create something that at least feels like it had a budget and I really liked the editing of the film. Two things pop in mind: the titles that always blend in with the image on screen like in the TV series “Heroes” and a scene where Tiffany Mulheron walks up to the camera (naked, but we just get a head shot. Damn!) en the camera shakes a little to the direction she is bending her head. Creepy but cool.
Somehow the movie never got me really involved and that’s what is keeping it from being great. Also the insertion of the word Lesbian in the title brings up certain expectations of a film. If it has Lesbians in the title one expects steamy lesbian sex. It must have ended up on the cutting room floor because other than a kiss here and there shared by girls among each other there’s not a whole deal of raunchy stuff going on. Well with all the hot girls running around, you’d expect some gratuitous nudity, but the movie doesn’t deliver in that department either. Even a scene where Tiffany Mulheron is taking a shower is shot in way we don;t get to see anything. Guess there could be kids watching! (What parent in their right mind would let their kid watch a movie with a title like this?). Now it’s probably a bit immature to put a movie down based upon absent nudity. But in my opinion a movie like this is required to have it, it’s a genre rule. Especially when you have tons of lust objects running around.

The movie is funny, has a consistent plot, is very well made and will probably entertain everybody for the full 80 minutes of its running time. It’s good, but not great. For that is rips too much off from Shaun and is not enough involving. And there was surprising little nudity. Shame on you film-makers for teasing us!