In Arnold Schwarzenegger’s latest movie he seems to return to the type of movie that made him famous: an over the top action movie in which he portrays an (almost) super human character. In Killing Gunther the Austrian Oak is Gunther: world’s greatest hit-man. The people wanting to kill Gunther are all assassins themselves. They are led by Blake, who wants to become world’s next best hit-man. But Gunther always seems to be one step ahead of them resulting in a series of failed attempts. To quote Omar from The Wire:

“You Come At the King, You Best Not Miss.”

But those expecting a throwback to the glorious 80s are sure to be disappointed as Killing Gunther is a comedy. It’s a mockumentary in the vein of This is Spinal Tap and The Office. A camera crew is following a bunch of hit-men and women.
Those expecting an Arnold Schwarzenegger movie will be disappointed as well, a he turns up at the 67th minute of this 93 minute movie. He also spends most his time talking to the camera as part of an interview.

So that is Killing Gunther in a nutshell. But let’s look beside the expectations and judge the movie for what it is: a low budget comedy starring one of Hollywood’s biggest stars poking fun at his persona. This isn’t the first time this has happened. In 1993 Arnold mocked his own brand of movies in Last Action Hero and just a few weeks ago I witnessed David Hasselhoff doing the same thing in Killing Hasselhoff. Even the titles are oddly similar.
But while front and central in the advertisement for this movie, Arnold is a supporting character. The real focus lies on the assassins, first and foremost Blake (Taran Killam, who also wrote and directed this movie). He is assisted by a bunch of eccentric characters, each with their own unique quirks. Let me just list them by their main feature:

As you can tell, Killing Gunther doesn’t shy away from the stereotypes. We mostly follow this ragtag bunch as they try to hunt down Gunther and kill him. They constantly fail and even taken out by Gunther. Since Arnold doesn’t appear until the final act all these scenes have Gunther somewhere in the background, seen from a distance and/or with his face obscured. These are the moments that budgetary choices are the most obvious. But you can tell that throughout the movie that this is a movie made on a shoestring budget.

Writer/director/star Taran Killam probably enlisted the help from all of his friends to make this movie: Cobie Smulders from How I Met Your Mother plays his ex-girlfriend, but in reality she is married to Killam. Bomb guy Donnie is played by Saturday Night Live co-star Bobby Moynihan. It’s save to say that they probably had just enough money to hire Arnold for a day and have him shoot all of his scenes in such a short period. He doesn’t get to do much next to talking to a camera, save for one action scene.

Almost as obvious as Arnold’s lack of presence in the movie are the special effects. Well, I wouldn’t call them special. Most of the effects look as if an intern did them. There is plenty of CGI used to create snakes, gun shot impacts and exploding yachts, but none of it looks convincing. In fact, even the obviously photoshopped photos look fake: 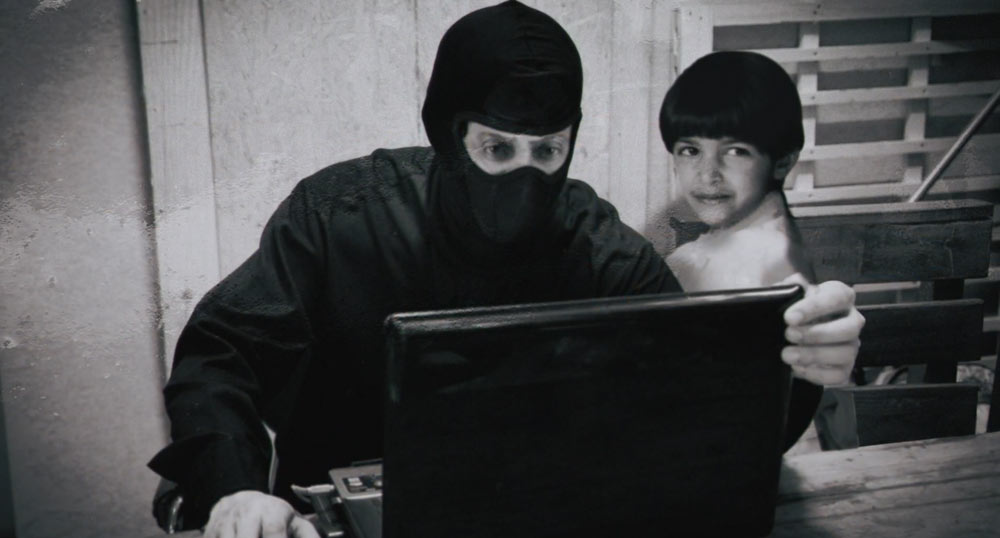 This being a comedy, the most important part is whether the movie is actually funny. While that is a matter of taste, I found it to be hit and miss. There aren’t really any laugh out loud gags to be found, but I did have an occasional chuckle. The mockumentary premise runs out of steam halfway through and I kept checking the current running time waiting for Arnold to pop up. It would have been a wiser choice if they had spread him throughout the movie more, instead of building up to what is ultimately an anti-climax.

Killing Gunther does have a scene in which Arnold is dressed in a native German outfit talking German. While there are far better movies to choose from, that does make up for something.