It has been a while since we last saw a movie actually starring Jean-Claude van Damme. Unlike other faded action stars of the 80s and 90s he seems to pick his starring roles carefully, while appearing in supporting roles every now and then. That’s not to say his picks are that good. I gave his last movie, Pound Of Flesh, a mere 2,5 star in my review. As a leading man, Jean-Claude currently lacks the energy to keep a movie interesting and he seems to fare way better in supporting roles. He often elevates movies when his role is small, like in Kickboxer: Vengeance. It was a disappointing movie, but Van Damme’s presence sure made the movie a bit better. 2017 brings us a new movie starring the Muscles from Brussels simply called Kill’em All.

Kill’em All revolves around a group of men arriving at a small hospital by ambulance after a massive shootout. One of them is Van Damme who is being taken care of by a nurse. Shortly after, a foreign gang comes to the hospital to hunt him down resulting in a cat and mouse game between them and Van Damme. The movie is told in flashback by the nurse as she’s being interrogated by two F.B.I. agents who have to get to all the facts in this case.

In terms of location Kill’em All is a very contained movie. 90% of the movie takes place in a hospital. The other 10% consists mostly out of scenes taking place at the F.B.I. and stock footage from the war in Yugoslavia in the early 90s. A confined place should not be a problem for an action movie, when you utilize the area the right way. Die Hard takes place in a sky scraper and it is one of the best (action) movies of all time. The confined location in Kill’em All makes the movie’s low budget stand out. The hospital is basically empty. All I saw was one doctor and the nurse who is helping Jean-Claude. They have put in a throwaway line about how this hospital is only used for emergencies, but that doesn’t make any sense. Even for just emergencies a hospital requires more staff than just two people, especially when you take in consideration that it has at least five floors.

In terms of casting this movie has some interesting names attached to it. Daniel Bernhardt is the commander of the gang chasing Van Damme. He might not be a household name, but he starred in the Bloodsport sequels and often appears in similar roles in high profile movies like The Matrix Reloaded, Logan and John Wick. Maria Conchita Alonso who plays an F.B.I. agent has had some notable roles in the late 80s and early 90s appearing in movies like Predator 2 and The Running Man. Aside from Van Damme the most notable cast member is Peter Stormare, who I like to call the Swedish Danny Trejo. He often plays bad guys and has a certain distinguished accent. Most people will recognize him from movies like Fargo or the TV-show Prison Break.

Sadly none of the cast makes an impression. Stormare is especially bad as the F.B.I. agent who is constantly doubting everything the nurse says during the interview. He is constantly overacting and not one second believable as somebody who would work for the Bureau. Another cast member whose name I dreaded to see on the credits was Kris van Damme. Once again the son of Jean-Claude van Damme pops up in one of his movies. At this point Kris’ entire resume consists of movies starring his father, which is pure nepotism. I’m not surprised he doesn’t have any acting jobs other than in his father’s movies; he is a really lousy actor. In Kill’em All he is a member of the gang chasing Van Damme resulting in a fight scene between father and son. It’s one of the lengthier fights, though I doubt Kris really had training. Everything about him screams “spoiled little rich kid”. 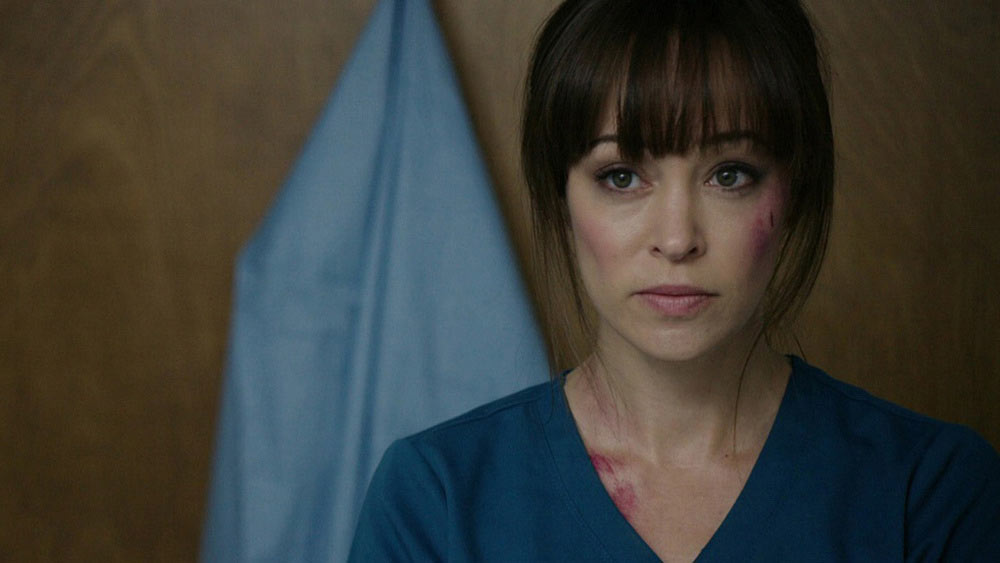 There was one certain scene that stood out in terms of strangeness. At one point Van Damme and the nurse hide in a room and the injured Van Damme claims he needs some food, so she provides him with something to eat. Soon after they have left the bad guys enter the room and find the leftovers. This results in a troubling sounding line by Daniel Bernhardt about how Van Damme has eaten. As if Van Damme is Popeye or something who has just eaten a can of spinach, or a Gremlin. It was just so weird. Food is often used in video games to restore health to a playable character which kind of makes sense when you look at this movie. The way Van Damme works his way through the hospital to a target on the fifth floor feels very much like a video game.

Kill’em All is basically just a low budget action version of The Usual Suspects: It’s about a witness giving a statement to a law enforcement official. It even copies the twist at the end. But to not completely feel like a rip-off it follows it up with another twist which did not make any sense at all. As if M. Night Shyamalan did some last minute rewrites to the script.
What we also get is some in-depth explanation about the Yugoslav war, which is something you do not often get from Hollywood movies. They only tend to cover wars America was a big part of. So for all of its flaws, at least has something of an educating element to it.

Bottom line: Kill’em All is not the return to form I was expecting from a Jean-Claude van Damme. Then again, I didn’t have any high hopes since the most notable aspect of the trailer was that the guy from Honest Trailers did the voice-over. It was all everybody in the Youtube comment section could talk about. But Van Damme had some decent fight scenes and the lady member of the gang (Mila Kaladjurdjevic) was pretty hot. I only hope this is the last time Kris van Damme pops up in a movie. Seriously Jean-Claude, you are not doing anyone a favor by putting him in your movies. Or to put it in a meme form: