Before writing this review on Kill Bill I was stuck on the fact whether I should review both movies separately or as one movie. Kill Bill is in fact one movie split in to two parts for length and financial reasons, but the two parts vary so much in tone and style that they both deserve their own review. Too bad “The Whole Bloody Affair” never saw an official release, that would have made things much easier. So I’ve decided to review them both separately in one review; a whole bloody affair review

Kill Bill is on paper a simple revenge tale. A woman we only know as “The Bride” is left for dead after 5 individuals slaughtered her and everybody else in a wedding chapel. But despite a shot to the head she turns out to be alive and ends up being in a coma for several years. At one point she wakes up and decides to get revenge on the people who murdered her fiance, his family and supposedly also her unborn child. The problem is that the people who tried to kill her are part of an assassination squad of which she also once was a part of. The leader of this squad is named Bill, hence the title. 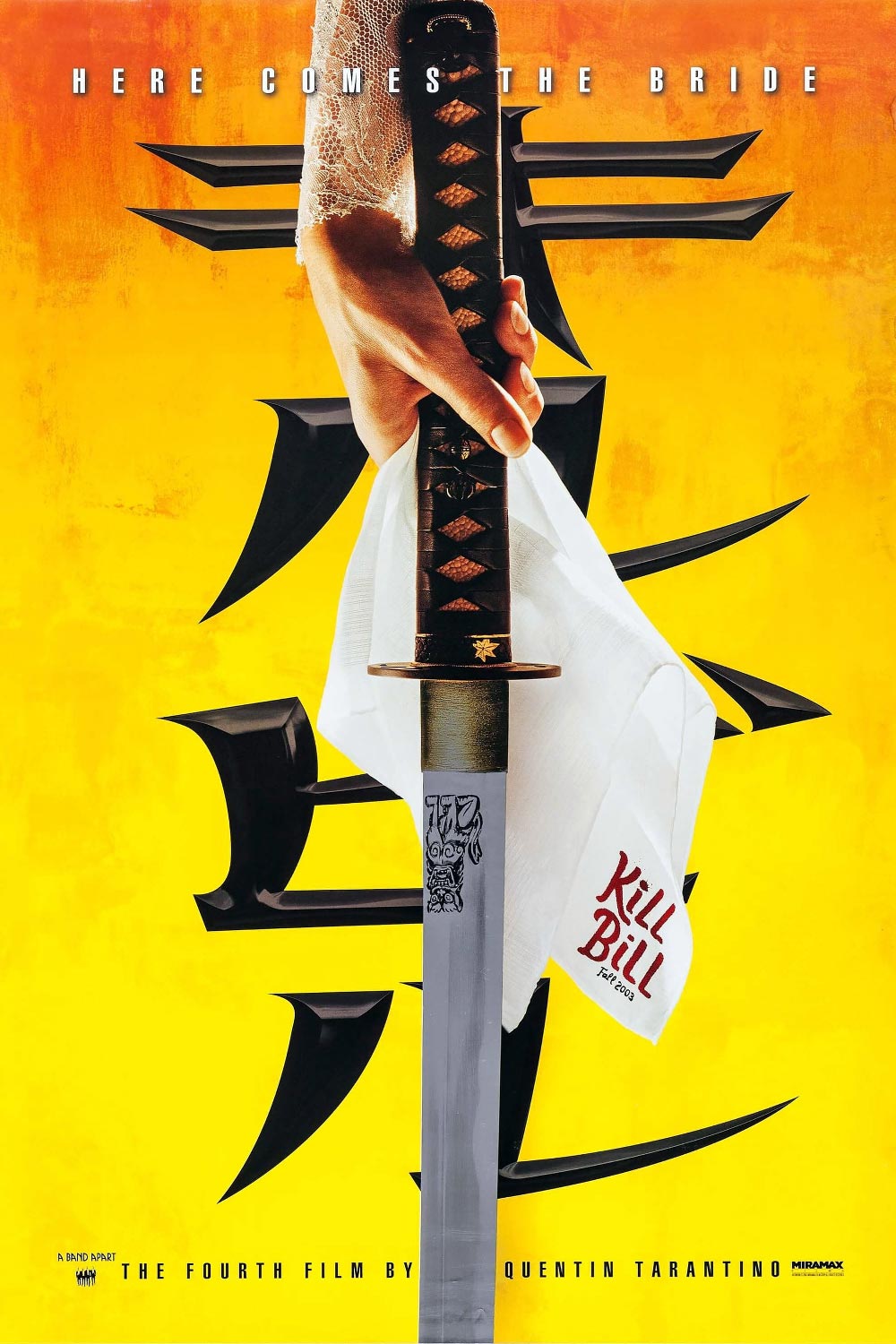 The first volume focuses The Bride killing two of her adversaries: Vernita Green (Vivica A. Fox) and O-Ren Ishii (Lucy Liu). This is hardly a spoiler considering that this movie, like Pulp Fiction, isn’t shown in chronological order. When we see The Bride walk to the residence of Vernita we already saw a piece of paper with O-Ren’s name crossed out. Next to these two adversaries volume 1 covers The Bride’s coma and subsequent wake, the muscle dystrophy and the quest for a special samurai sword, or Katana as they’re officially called.

Where the previous Tarantino movies were influenced by classic genres like blaxploitation and pulp crime, Kill Bill takes those influences and directly incorporates them into the movie. Instead of simply referring to them by casting classic kung fu actors like Gordon Lui and Sonny Chiba the same way he casted Pam Grier in Jackie Brown, he actually uses techniques like certain camera zooms from these old movies. He starts the movie of with some worn studio logo animation and a 70s title card that states “feature presentation”. While not going as far as he and Robert Rodriguez would go with the Grindhouse project where both movies where made to look like they’re shot on film 30 years ago and aged badly over time, Kill Bill is the first movie where he would start making movies that have the pacing of a movie made today, but in terms of style and look could just have well been made decades ago.

As always the dialogue in this movie is typical Tarantino, but talking is something these characters aren’t wasting any time on. The Bride is out for revenge and doesn’t go into great lengths to engage in conversation with her adversaries. Thus this movie focuses largely on the action scenes of which there are plenty, especially in the final hour when the bride is in Japan and takes on a room full of guys dressed in black suits and Kato masks. There also plenty of typical Tarantino moments like when the daughter of one of the team members comes home from school and finds her mom and The Bride fighting, or Buck with his Pussy Wagon and clandestine business on the side.

The reason why Tarantino’s revenge tale takes up to 4 hours to tell becomes quite clear very early in the movie. Tarantino takes the time to develop his characters. There are 6 of them and most of them get entire back-stories, like O-Ren who’s back-story is told in an Anime sequence. Another fine example of Tarantino not simply referring to a genre but actually incorporating it. The first volume is basically a kung fu movie and a damn fine one.

Sadly it’s not perfect. At certain points Tarantino uses style over substance, something he so carefully avoided in Pulp Fiction. The plane scenes are obviously fake and the fact that the Bride has a sword next to her in the plane is very unbelievable. He also puts in a typical Japanese scene between Hattori Hanzo and his help in the diner which is lost on western audiences. It’s probably supposed to be funny, but the joke gets lost in translation. 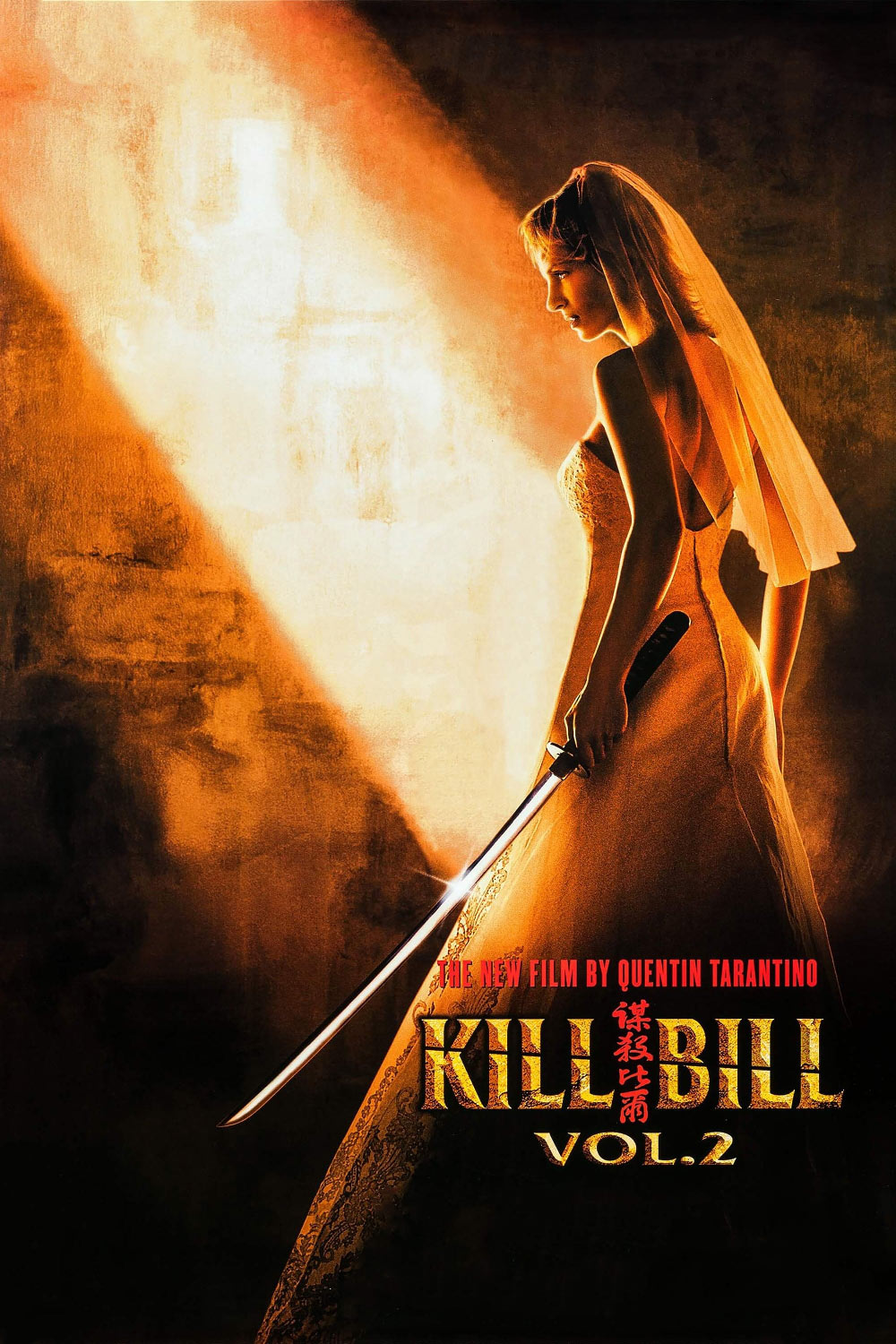 The second volume kicks off right into high gear with The Bride driving in high speed to her latest target: Bill. Once again Tarantino toys with the timeline, revealing the outcome of the showdowns between the last two henchmen which she apparently survived and they did not. Next to Bill the second volume pits her against Budd and Elle Driver, both whom had small parts in the first volume. Kill Bill isn’t about who’s getting killed, it’s about who’s getting killed in what way. Oh and it’s about the journey of course.

Taking her out of Asia Volume 2 has The Bride in America and Latin-America going after her still living former team members. The change of scenery also makes this volume more reminiscent of a western rather than a kung fu movie like the first volume, though there are still homages to the kung fu genre found in this volume, most notably a chapter dedicated to The Bride’s training under kung fu master Pai Mei who’s a caricature/homage of old kung fu movie trainers. He also seems to have superhuman powers being able to stand on a katana held by somebody else. In any other movie this whole scene would stand out and not fit in with the rest of the movie, but due to the fact the first volume was drenched in the kung fu genre it feels in place.

Where the first movie focused more on action than on dialogue, the second one puts Tarantino’s dialogue front and center especially during her confrontation with Bill who has a lengthy monologue about superheroes.

Kill Bill isn’t a normal revenge story. Despite the amount of back stories and depth these characters have, the two volumes are basically comic book movies where characters can stand on swords, dig through dirt, jump 10ft high and rip eyes out of skulls. Kill Bill is a fun 4 hours, though some of the paying homage touches feel out of place. The zooms in the Pai Mei scene for instance: once would have been enough. Same goes for the use of Quincy Jones’ “Ironside” music…
I do applause Tarantino for using the Japanese language fluently throughout the movie, the same way he did in Inglourious Basterds. This makes it all feel more authentic.

Despite a couple of minor remarks, both volumes are highly entertaining and in terms of quality neither one is remarkably better or worse than the other. The chapter structure is a nice touch, though the non-chronological order doesn’t really add something extra. Kill Bill is considered a return to form by people who were let down by Jackie Brown, but I must confess that the re-wachtability of Jackie Brown is somewhat higher than this one. When considered as one movie, which it should be, four hours is just too long and it could have used some trimming. But viewed in two separate volumes, as it also should be (confusing right?), the movies lag hardly. For this reason I’m curious to The Whole Bloody Affair cut, which will probably never see the light of day. I’m wondering if viewed as one 4-hour movie would be fun or demanding.