After avenging his brother’s death by murdering Tong Po, Kurt Sloan is now a professional MMA fighter in the U.S. A couple of guys get the jump on him, manage to sedate him and smuggle him out of the country. When he wakes up he finds himself in Thailand with a simple choice: Fight Tong Po’s replacement Mongkut or be put in a Thai prison full of people with love for Tong Po. All ordered by an American named Thomas Moore who is played by B-movie veteran Christopher Lambert.

Kickboxer: Retaliation largely reuses the same plot often seen in this type of movie. To inject some originality in the script the writers have added several elements. There are now two trainers instead of one and Mongkut is a genetically engineered fighter. Ripping of Rocky IV; way to go!

Also returning is Jean-Claude van Damme as Master Durand. Blinded by the same men who abducted Kurt he once again provides him with techniques to defeat his opponent. Other help comes from newcomer to the series Mike Tyson who plays an inmate. He provides Kurt with all kinds of zen wisdoms as well as some fighting techniques. It will come as no surprise to avid martial arts movie viewers that these wisdoms come back in flashbacks during the final showdown. Welcome to Martial arts movie making 101. 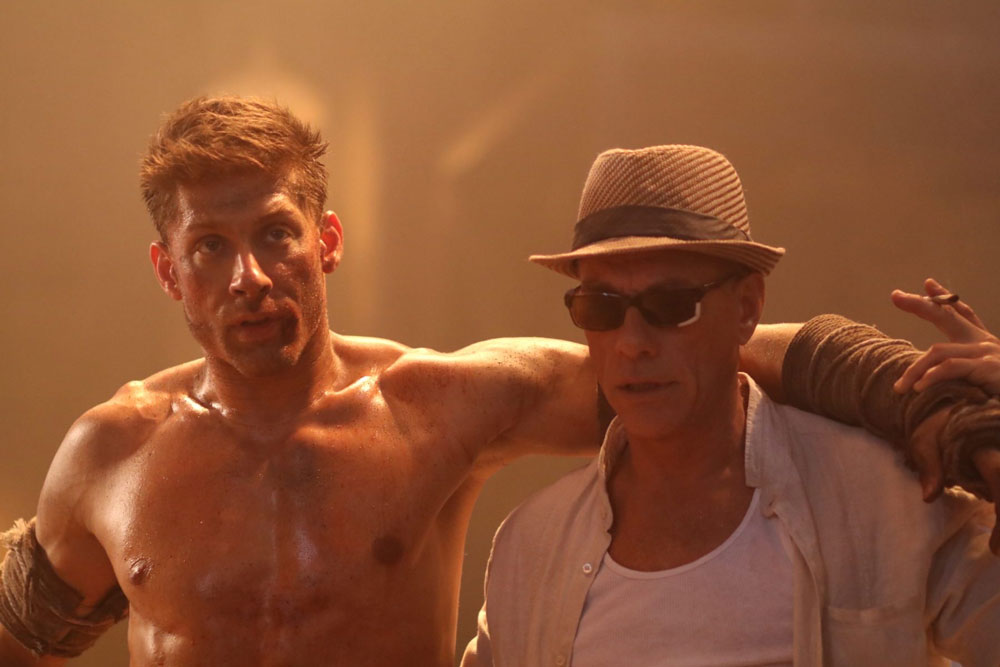 In order to create something that at least feels somewhat original the movie takes certain detours in order to come to the final showdown. Not willing to participate in a fight against the hulking Mongkut they hold his wife hostage. This results in a rescue attempt. When this goes bad she ends up in a coma, prompting Kurt to take the challenge he has been turning down the previous 60 minutes.
The movie opens with a dream sequence which forebodes certain events and characters in the movie. Not something you see everyday in a movie like this, but it didn’t add much to the story.

Luckily there are plenty of fight scenes in the movie that are pretty good actually. The final showdown feels a bit long but features some impressive choreography. Mongkut is a character that towers above Kurt making him a formidable foe. There is also a lengthy prison fight scene in which Kurt takes on a whole bunch of opponents. Most of them one at a time because that’s what martial arts movies dictate. Alain Moussi has some nice movies and he reminds me of Scott Adkins who has a similar set of skills, but a better screen presence.

This brings me to weakest point of this movie: the performances.

One of the things that made movies with guys like Van Damme and Scott Adkins so entertaining is that they have an enigmatic presence on the screen. They are fun to watch even when they’re not kicking ass. Moussi lacks that presence and is never really interesting as a character or actor. In terms of acting Jean-Claude van Damme once again proves to be the heart of the movie. This is one of those rare Van Damme movies in which he doesn’t have a fight scene. Still he is the most charismatic actor in the cast. Tyson is OK, while Christopher Lambert seems to revisit his Rayden character in the Mortal Kombat movie. Sara Malakul Lane is just there for eye-candy.

As the big bad, Hafþór Júlíus Björnsson’s role as Mongkut is mostly a silent one. Just like in Game Of Thrones by the way. A wise choice since he has a very thick accent and not the charisma of other actors with a thick accent like Antonio Banderas or Arnold Schwarzenegger. The less he says, the better.

Kickboxer: Retaliation is an enjoyable, if slightly overlong martial arts movie. It features plenty of cool action scenes, but overall the movie could have been cut 10-20 minutes shorter. It’s a throwback to the late 80s action movies like Bloodsport and of course the original Kickboxer and those movies often clocked in somewhere between 80 and 90 minutes. These are movies about guys kicking the shit out of each other in the ring. No need for convoluted detours or guys saying they won’t fight when the whole concept of the movie is him fighting.