At this point I should probably say something about the plot, but if you’re reading this than I can probably safely assume you have seen at least seen Jay and Silent Bob Strike Back. If you have not, or are not even familiar with the so-called ViewAskew Universe than I suggest you stop reading and catch up starting with 1994’s black and white indie darling Clerks. Jay and Silent Bob Reboot basically follows the same plot as Strike Back. These two stoners once again travel to Hollywood in order to stop a movie in production which is based upon their alter ego’s Bluntman & Chronic. The only difference is that Jay finds out he’s a dad and his teenage daughter travels along with them together with some of her friends. 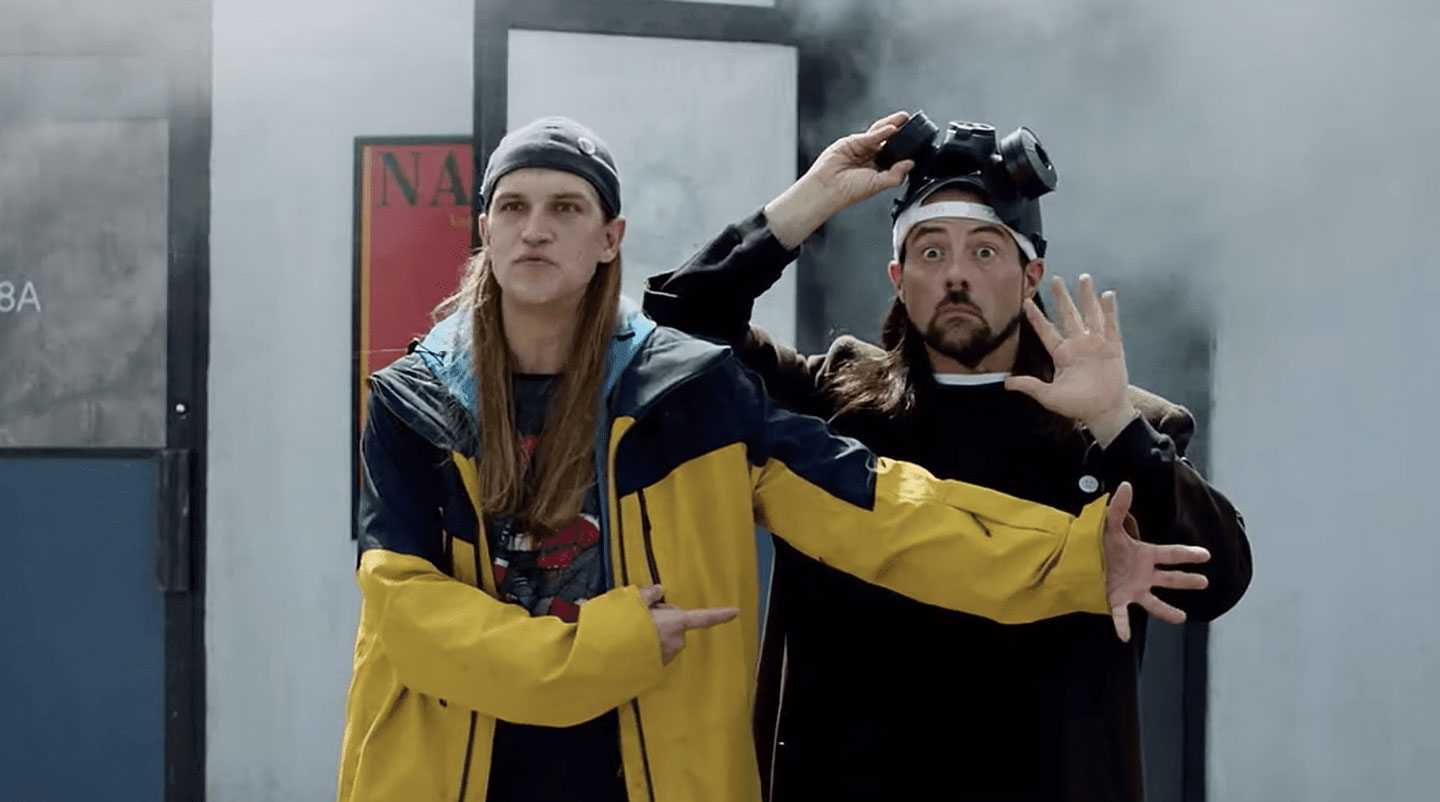 Much like its predecessor Reboot isn’t so much about the story, as it is with Smith putting in as many dick jokes and cameos as he can. And the movie is chock full of them. Almost all of the major characters from his previous movies return for at least a cameo. He even manages to pull in some big new names. Chris Hemsworth, Val Kilmer, Joe Manganiello to name a few. I’m not going to list all of them because that would spoil much of the fun. But on paper this looks like the most expensive movie of 2019 in terms of casting. Except for Avengers: Endgame of course.

To me the most confrontational aspect of Reboot is the age gap. When I went to see Jay and Silent Bob Strike Back at the cinema back in 2001 I was just 22. Now I’m 41. My personal life hasn’t changed wildly since then, but those in 18 years a lot has changed. Smith’s daughter Harley Quinn is now an adult, most of the returning cast members are pushing 50. American Pie‘s Shannon Elizabeth is now a M.I.L.F. herself. Should they remake that movie she would be the perfect choice to play Stifler’s mom.

But age and  a drug addition hasn’t been kind to Jason Mewes as well. His voice is still the same, but years of substance abuse has given him a bit of a “junkie look”. His eyes are now deep in his sockets and he seems be a tad skinnier. According to interviews managed to kick the habit, but it does seem to have taken its toll on the man.

As an author Smith hasn’t grown much. He has always been able to write some truly tender moments or thoughtful ideas and then surrounding them with dick and gay jokes. There are truly touching moments in Reboot, and there are plenty of hilarious ones. But what I do like about Smith is how he is aware of his limitations and the movies he made. There are jabs at movies like Tusk and he even appears as himself in the final act of the movie.

This movie had me in stitches from time to time and it shows that Kevin Smith is at his best when keeping it to his tried and true self. Though I must say that I liked most of his non-ViewAskew movies. This is a movie nobody actually asked for, but I’m still glad we got it. Even though it makes me feel old.