Iron Man 3 is the first movie released after The Avengers. A movie that was probably the biggest event in 2012. It was a lighthearted movie in which all of the Marvel superheroes who were already introduced in their own respective movies teamed up against a giant threat. The Avengers focuses mostly on the team’s dynamic, with little room for personal journeys. Iron Man 3 is a direct sequel and deals with the aftermath of the events in The Avengers and how these events affect a superhero.

In Iron Man 3 Tony Stark struggles with the events that occurred in the previous movies. He is suffering from PTSD which, among other things, results in him having trouble sleeping and anxiety attacks. Despite saving the world he questions himself. But since this is a superhero movie and not an introspective on Tony’s depression dangers are on the horizon. The danger comes in the form of a terrorist called the Mandarin. A Bin-Laden-esque figure who is responsible for a series of terrorist attacks on US soil. After an attack on Tony’s home by the Mandarin, Tony is presumed dead and goes underground. Underground in this case meaning rural Tennessee where he hides out in a shed and befriends a 10-year-old boy.

Which actually sounds rather creepy when you put it like that.

This being a PG-13 movie the relationship between Tony and the boy is purely platonic. The kid represents the son Tony never had. To the kid Tony is much like E.T. This thing from another world that suddenly has to hide out at your house.

Meanwhile there is a lot going on. Rhodey’s War Machine has been given a make-over and a new name: The Iron Patriot. He looks like a mash-up of Iron Man and Captain America. Pepper Potts has to deal with the head of a weapons manufacturing company, Adrian Killian. And there is a group of people out there who are able to combust. 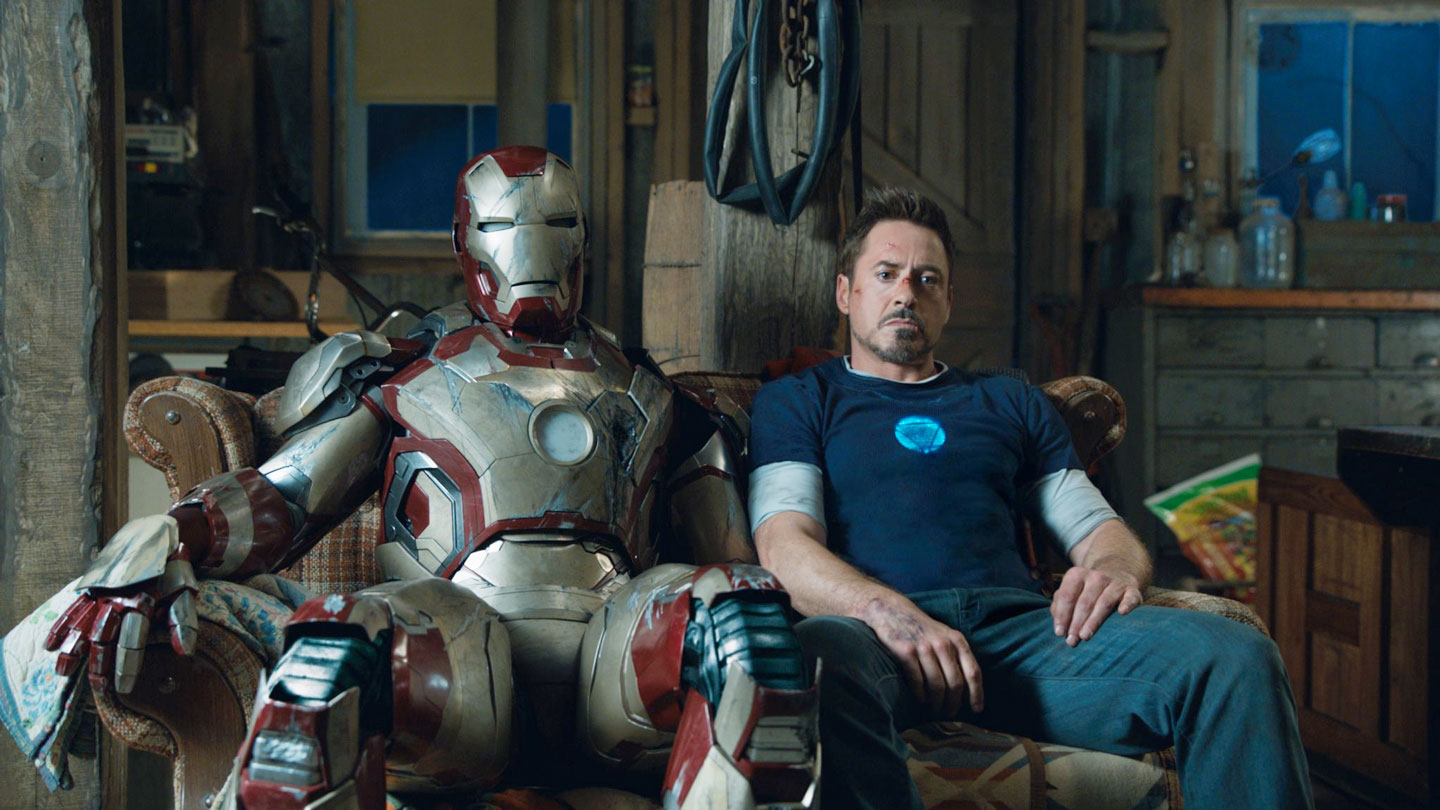 Iron Man 3 is at some times a better movie than the second movie, and sometimes not. The focus lies mostly on Tony again and not on setting up an Avengers movie. But there’s also a lot going on giving the movie a somewhat messy feeling. Like in the Batman movies there are multiple villains but none of them is actually menacing. Not even the Mandarin who is part of a twist that a lot of people didn’t like. Not being familiar with the Iron Man comics and the character I thought it was kind of a fun twist.

And it certainly is better than having the villain be yet another guy in a metal suit.

The finale is quite messy and requires an extreme amount of disbelief. Tony, without his suit, seems to be impervious to a thing called gravity and impact. Somehow he’s able to make enormous leaps and always lands on his feet or on one of his suits in mid-air. He never breaks or even bruises anything in these scenes. Luckily the finale does incorporate a lot of pleasing moments, most them involving a whole range of different Iron Man suits controlled by Jarvis. One of them even seems to be a prototype for the Hulk-buster suit shown for the first time in Avengers: Age of Ultron.

I do like how the character of Pepper Potts is now less a damsel in distress this time. Even though she is used as one in the final act, there are multiple scenes in which she displays some serious “girl power” as the Spice Girls would put it. There is even a brief moment in the movie where she puts the suit on and saves someone.

Iron Man 3 dares to take Tony’s arc into more serious territory. The second movie touched upon his alcoholism, but only very lightly and purely for laughs. Drunk dancing and peeing in his Iron Man suit can hardly be called a serious approach to such a subject matter. Here his panic attacks and depression put a more serious stamp on the movie, but still only as far as a summer blockbuster can go.

Then again, a movie like Logan is proof that you can take the superhero introspective pretty far.

Iron Man 3 is a decent entry in the Marvel Cinematic Universe. There are some great moments in here, but the plot is a bit convoluted and all over the place. In the great scheme of the MCU the only lasting impact this movie makes is that Tony doesn’t need the arc reactor no more and the introduction of the Iron Army. Though they were suddenly just there and blown up by Tony at the end of movie for no good reason.

But I shed no tears. Tony now makes suits seemingly as fast as a baker bakes a loaf of bread. This is the weakest aspect of the MCU. Moments that are meant to mean something are quickly undone. So by the time the next Avengers movie comes along Tony will have a new collection of suits and a character like the kid is never heard of again. Iron Man 3 is much like a sitcom. Despite all the events that happen on screen, at the end of the story everything returns to the way it was before. The only thing missing is the laugh track.