Weren’t the late 80’s and first half of the 90’s great people? We have this guy who can’t act but sure as hell kick a punch in movies with mostly no plot at all except for him kicking ass for 90 minutes long. OK, so they did have a little plot but the movies were all about Steven kicking the butts of bad guys. Steven would hit, kick, run, jump etc etc and people would get there bones broken in the nastiest ways. Who can forget the guy with the meat cleaver in “Out for Justice“? The way that was handled: pure testosterone filled ballet! Now it’s the new millennium and the only decent thing our aikido hero has released was Exit Wounds (with lots of help from wire-fu, funny script, good co-stars, a good director, Steven who went to the gym etc etc). OK so Belly of the beast was decent, but not when you consider Steven had a body-double in tons of scenes.

So here is Into the sun, the latest fight fest from Steven and what does it contains: 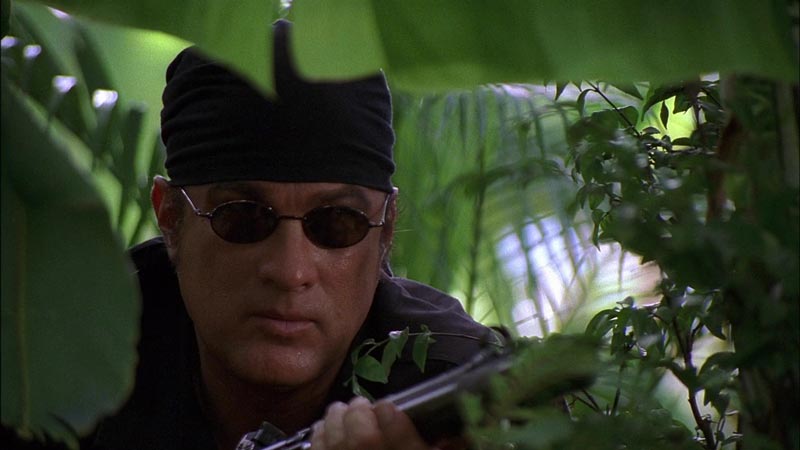 All Steven needs is a simple plot for him to go on a one-man-rampage across a lot of different locations fighting lots of men to get to his goal… Nothing more, nothing less. That never happens in Into the Sun. Steven just goes from friendly contact to friendly contact to get some info and that’s basically it. Only in the last half hour the flick turns into a revenge-story and we get to see a toned down version of Hard To Kill. What was the use of getting all that info in the first hour when the baddies get taken down by Steven out for a revenge motive? Next time someone writes a script for Seagal, just kill someone he loves in the beginning or drop some terrorists in the same location he is. Then get him “a shotgun and a patrol car” and he’ll do the rest.