Icebreaker is a mashup of no less than three movies; First of all it’s a Die Hard rip-off, second it concerns a crashed plane and the cargo on it is of special interest to some bad guys. There’s your Cliffhanger plot and third it takes place at a ski-resort similar to the low budget Die-Hard rip-off Crackerjack. So that’s already an F for originality. However, what makes a man watch this movie then? The fact that the good guy is Hobbit Sam and the bad guy is Evil Dead’s Ash sporting a bald head. Clash of the titans baby, OK, so maybe not quite but it’s still an interesting showdown. 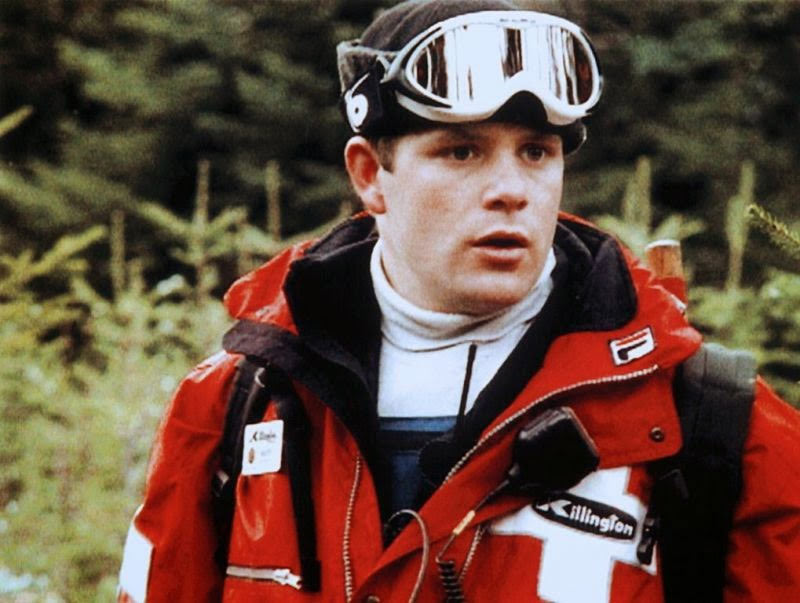 Hobbit Sam is a Mountain Patrol Officer who is meeting with his future father-in-law to tell him about him being his son-in-law in the near future. On patrol in the woods around the resort he stumbles about the earlier mentioned plane, which by the way has weapons grade plutonium on board. At the crash site is also local forest ranger Beck, who looks a bit like a stunt double for Jim Varney a.k.a. Ernest P. Worrell. But within minutes of their discovery two henchmen pop up and the first fight of many is on. Following their victory against two heavily armored men with bare fists and ski poles bad guy Greig (Campbell) decides he should go with plan B, which is basically nothing more than taking all the people in the ski-resort hostage.

Well 5 minutes of opening credits featuring all the different aspects of a ski-resort and a some product placement for Mountain Dew we’re in. The same Mountain Dew shot actually reappears give or take ten minutes later. From this point on it’s basic direct-to-DVD quality, especially in terms of script and special effects. For a simple Die Hard rip-off the motives and actions of the bad guys are quite confusing. Bruce Campbell’s character is dying, and somehow he knows exactly when he’s going to. At first I thought it was cancer, with the bald head and all, but when you’ve got cancer the precise time of death is unknown to you and you sure wouldn’t be able to perform a terrorist attack during your last hours alive. The movie just never mentions why he’s going to die, and how he knows at what time.

So his plan B was to detonate the plutonium at the ski-resort, mostly because there’s no time to do it somewhere more crowded or because the budget didn’t allow for filming in the big city. Creig has a whole team of mercenaries helping him but what’s their deal. If he’s going to set off a nuclear device that would kill them too. Why even enlist yourself with someone who’s going to die soon and wants to do a domestic terrorist attack? Good luck getting your money from a dead terrorist.

The movie is filled with these kinds of bad script writing. The end is especially annoying as it actually resorts into trying to take the main bad guy out with snow balls. By that time with have watched some really lousy action scenes due to bad directing and editing. Just watch the whole ski gondola scene for a good example of what I’m pointing out.

There are some upsides though. Bruce Campbell seems to be having fun as a bad guy, it’s just too bad it was in a movie like this. I also liked the quirky flamboyant resort manager who became pretty fun as soon as he picked up some hardware. Other than that there’s not much to Icebreaker. It’s a copy of bigger and better movies and not a really good one at that.

Oh and there isn’t any Icebreaking in this movie at all.