How to Lose Friends & Alienate People is a title which should be applied to a feature in which the audience is shown how to do exactly that, preferbly in a humoristic way. If the movie was starring John Cleese that would be the case, but it doesn’t.This movie stars Simon Pegg, also British and known for his comedy. How far does the apple fall from tree? Pretty far…

Don’t get me wrong I love Simon Pegg’s work. Two seasons of Spaced are standing here on the shelf, next to those stand Hot Fuzz and Shaun of the Dead. I even have Guesthouse Paradiso in which poor Simon is being lifted up to the ceiling by a fishing rod attached to his nipple-piercing. Ouch. Simon excells in comedies, but apparently only when their of British origin. I haven’t seen Run Fatboy Run, but judging by the looks of things in this movie Simon should go back across the pond and make movies there. Now I’m being too harsh on Simon. He is quite enjoyable and generates a laugh here and there, he’s probably even the solesupplier of funny moments in this film as I recall. It’s just that he is so much better in British films that standard Hollywood scripts like this movie has just don’t fit him. 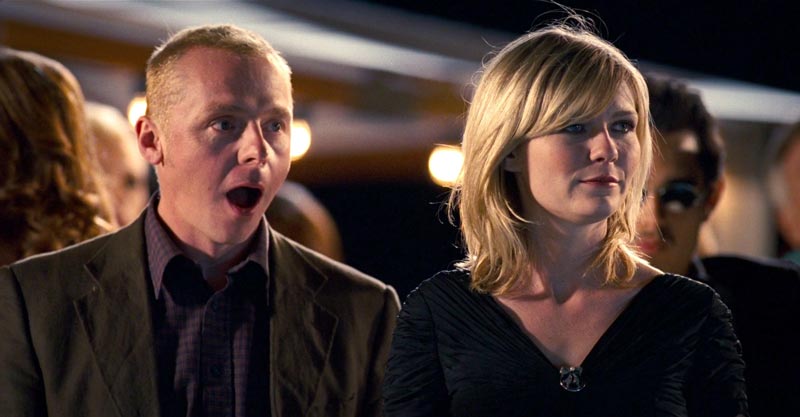 In Great Britain Simon Pegg is a writer for an alternative magazine called Post Modern Review. A magazine that pokes fun at the media obsessed stars and bucks trends. One day he is offered a job at New York based Sharps magazine. A magazine that takes the subject of celebrity as serious as he didn’t. From here on out the outsider must find out how to climb the ladder of success, or in this case: how to get from Room 1 to room 7.

Basically the movie is about selling out. If you want to have success in the world, leave your principles at the door we’re teached. Well, that’s quite bold of a movie that in the end is a romantic comedy with a cliché script: boy meets girl, hate each other at first, at the end realise they have more in common than they fought and end up together. That’s no spoiler, just a basic template which these movies work from. The usual staple of obligatory characters are here also; Kirsten Dunst: the love interest, Megan Fox: the object of desire (The entire film Simon wants to have sex with her), Jeff Bridges: The Boss. If there’s one that is missing it would be the “best friend”. But that would be weird considering the title.

Ok, so maybe I’m a bit harsh, but a movie with a title like this deserves a nastier script and not a simple romantic comedy plot. There are laughs but they come in a too large intervals. I can recommend it to Megan Fox fans who want to see her do an impression of a Miss-Wet-Dress-contest.

How to Lose Friends & Alienate People