While watching Higher Learning the first things that stand out are the impressive cast and elegant opening credits. The opening credits even has its own credit and it have been made by legendary credit-maker Saul Bass. These credits are made pure in black and white; a theme that makes up most of this movie. Subtlety is nowhere to be found in Higher Learning. A portrait of a school campus where young people with different (racial) backgrounds need to get along with each other. Something that’s not always the case.

Higher Learning follows three freshman students on the Columbus University: Malik, Kristen and Remy. Malik (Omar Epps) is a black guy who’s gotten in on a sports-scholarship. Kristen (Kristy Swanson) is a somewhat naive young white girl from California. Remy (Michael Rapaport) is a young white guy who can’t seem to fit in in any group.

The reason I’m listing their racial backgrounds and their sex is because the entire movie revolves around racism and sexism. Malik thinks the world owes him something and is constantly complaining how black people are put down by the white man. His “rage” is fueled by the Van Wilder of this school: senior Fudge (Ice Cube).  He is a “professional student” who is constantly talking with about race and politics. His complaints and views are partially justified as Campus Security breaks up their parties, but never parties by white students. Even after a rape occurred. The black students are constantly hassled and often asked for I.D. without a legitimate reason.

Tipping the scale the other way for Malik is Deja (a very young Tyra Banks). She tells him his attitude doesn’t get him forward in life and that he should be pointing at himself and not to others. Malik becomes a Black Panther nonetheless. 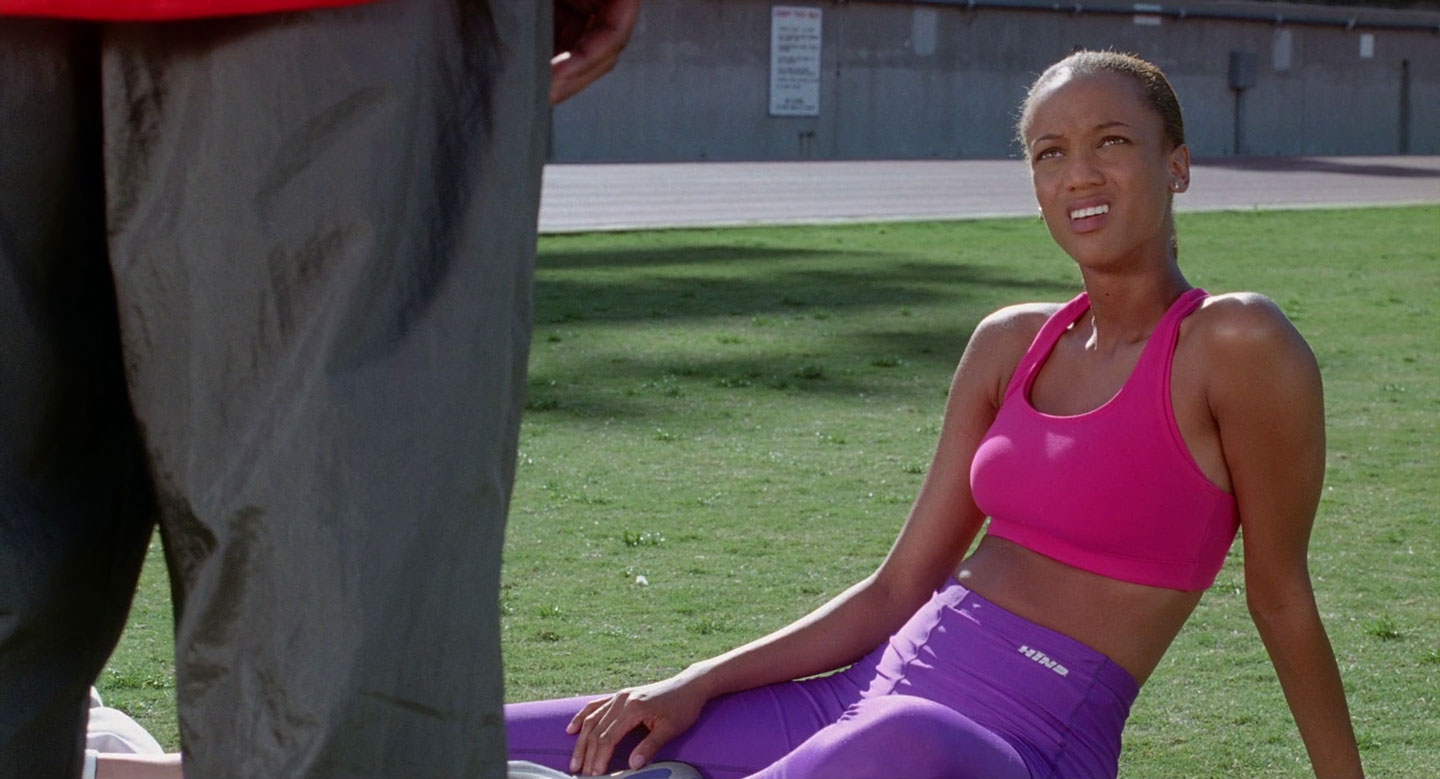 Because there is a group of Black Panthers there is also a group of Nazis on the campus. They have their own little dorm filled with Swastika flags and have constant heated dialogues about how this country is being stolen away from them. Conveniently ignoring that it was the white man himself who stole this country in the first place. They enlist Remy into their gang of hate mongers. He turns radical pretty quickly after some early negative encounters with some black people on Campus. The message here is that Ice Cube not turning the volume of his music down will turn someone into a White supremacist school shooter. 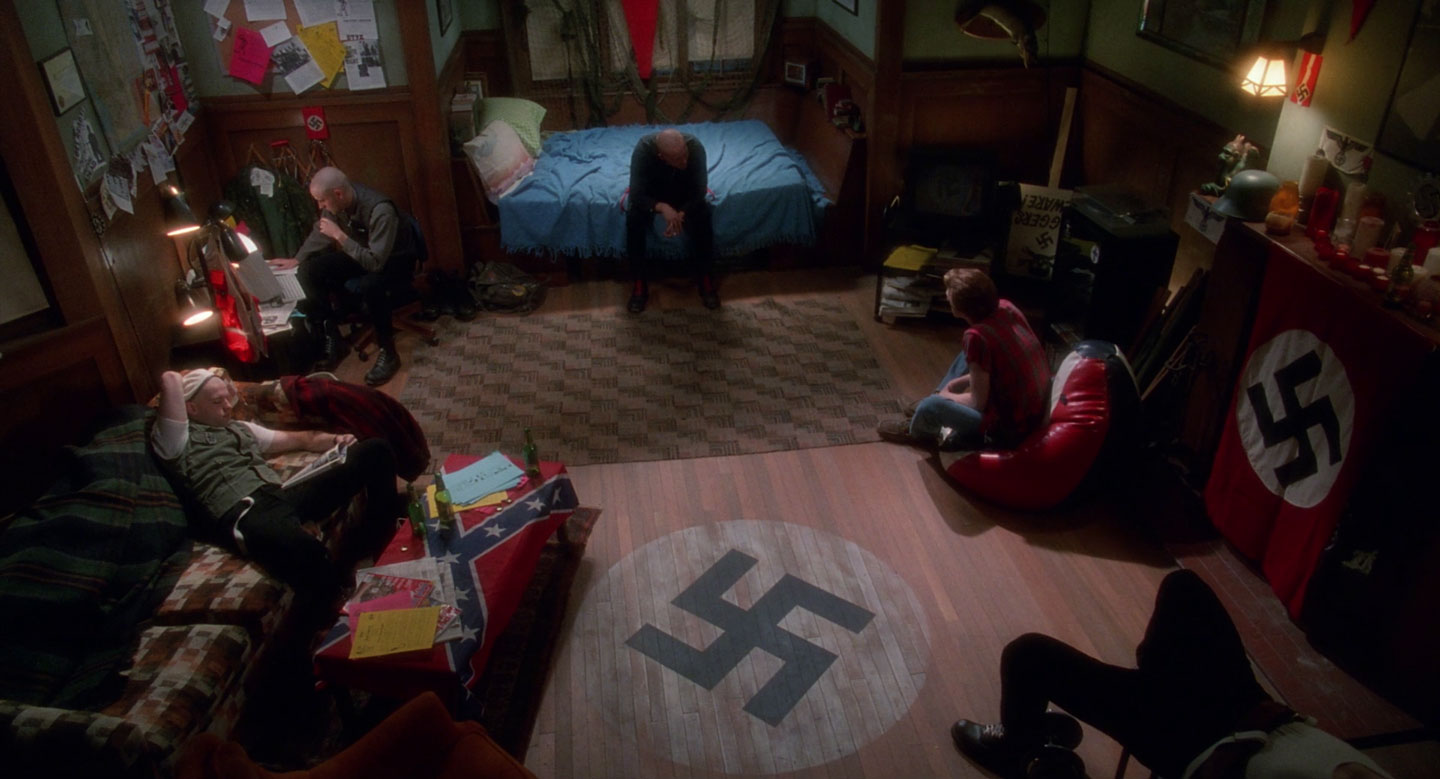 Then we have Kristen who is “raped” and recruited to a “non-sexist-society” activist group lead by Taryn (Jennifer Connelly). Who is a lesbian by the way. As Kristen spends more and more time with Taryn she begins to question her own sexuality. She’s attracted to Taryn and proudly prances around the Campus  hand in hand with her.

This is already quite a list of characters and there are even more. Laurence Fishburne plays a conservative professor who hammers on the fact that he judges everybody on their work not on who they are. Regina King is the black roommate of Kristen who witnesses her lesbian flirtation with Taryn. Adam Goldberg is the Jewish roommate of Remy the Nazi. Busta Rhymes does an irritating performance as Dreads, one of Fudge’s closest friends. 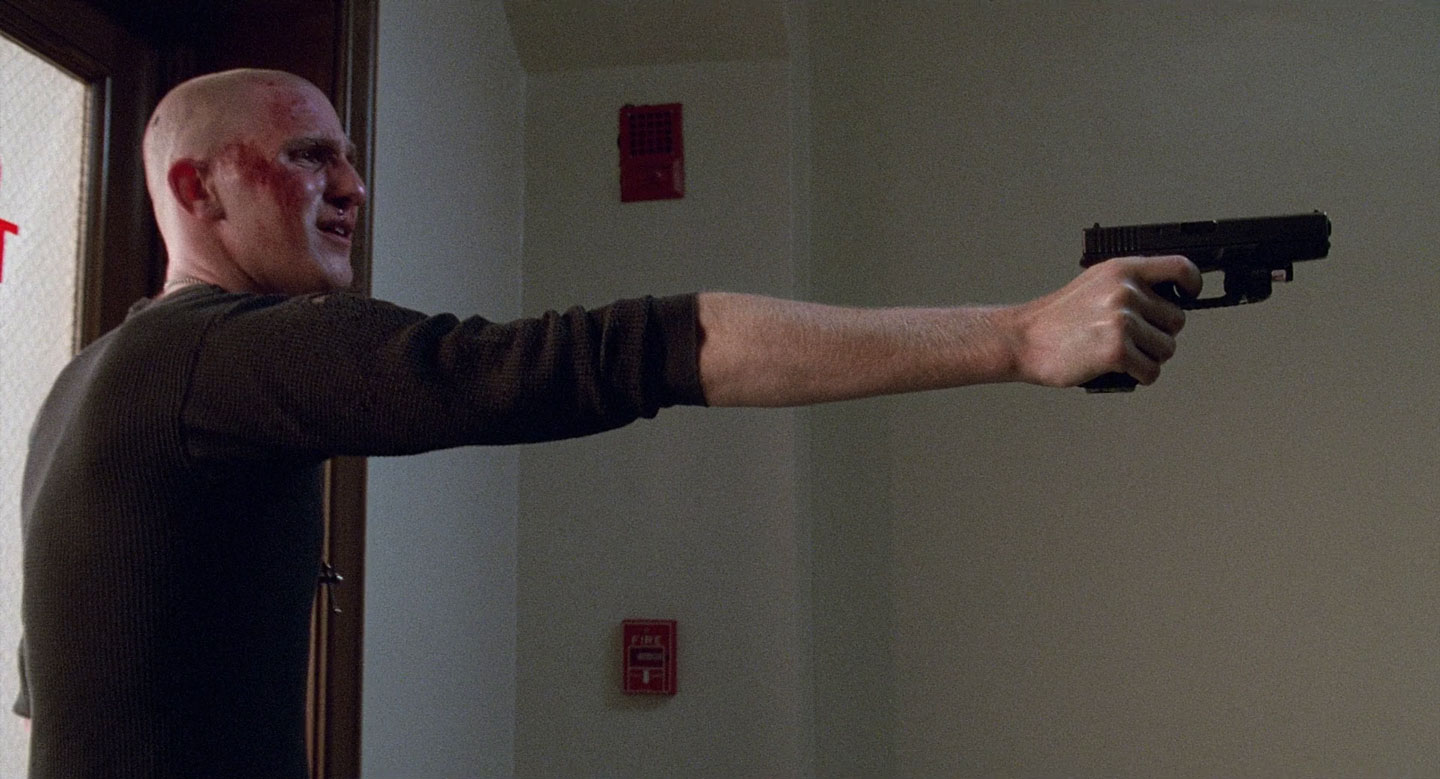 Aside from the lives of three main characters Higher Learning also deals with a lot of supporting characters. These characters don’t always have much to do. A character like Monet (Regina King) does nothing meaningful the entire movie does not even bring the plot forward. Taryn (Jennifer Connelly) is listed first during the opening credits yet has only one small scene after 15 minutes only to turn up again around the 40 minute mark. Her only purpose is to be the object of affection for Kristen. Someone who makes Kirsten explore her sexuality.

Higher Learning feels as if a lot of material ended up on the cutting room floor. Changes seem to happen overnight like Remy becoming a Nazi. This transformation is basically nothing more than: Remy is presented as a social outcast. Somebody then listens to him and says he’s his friend. In return Remy listens to what he has to say and it turns out it’s all Nazi propaganda. The next scene Remy’s sitting a the school library with his head shaven looking despicably to students with a different racial background. 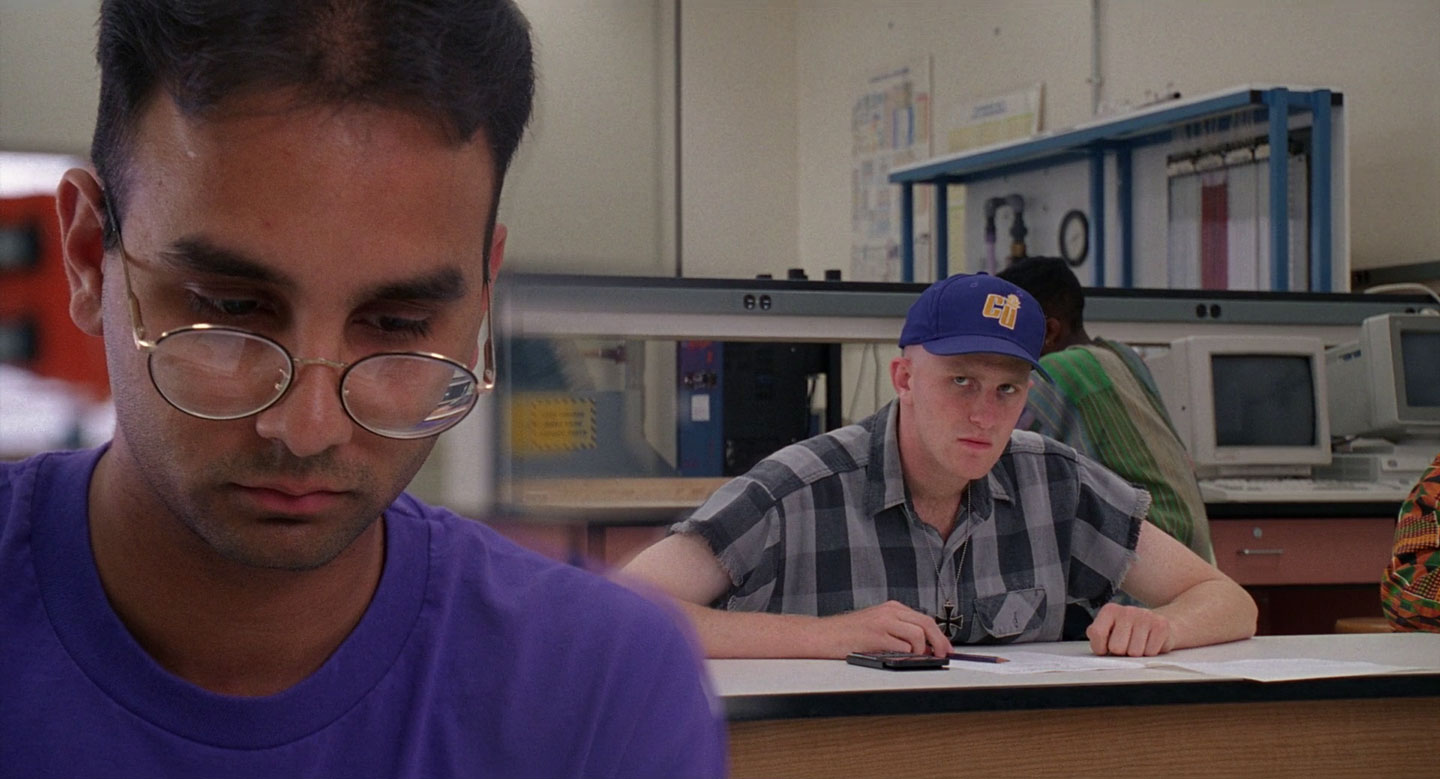 But the movie also leaves different story-lines unresolved at the end of the movie. The lesbian romance for instance. Which is actually a direct result of Kristen getting raped. Or was it a rape? They say it’s a rape but I beg to differ. Let me explain: Kristen and a fellow male student are drunk and go to his room to have sex. All is fine and she happily lets him undress her while she’s mumbling something about a rubber. When the guy is in she starting to panic about that he isn’t wearing a rubber and starts to scream. Since he does not immediately stop thrusting and she has to push him away it is considered a rape.

I was shaking my head when a couple of scenes later Kristen was making a speech at a rally about how she was a rape victim. This girl wanted to have sex with the guy, it was only after it turned out he wasn’t using a rubber she started to panic. This event propels Kristen into the women’s talk group led by Taryn. Taryn turning out to be a lesbian rather comes out of the blue. It’s Kristen who invites her in late at night to get to know each other a little bit better and she declines. She even makes a short speech that Kristen should not do this out of curiosity. Other than that they start to hold hands later on and when Kristen has sex with a new boyfriend she’s thinking of Taryn. And that’s it. Higher Learning never gives us a resolution about her sexuality. 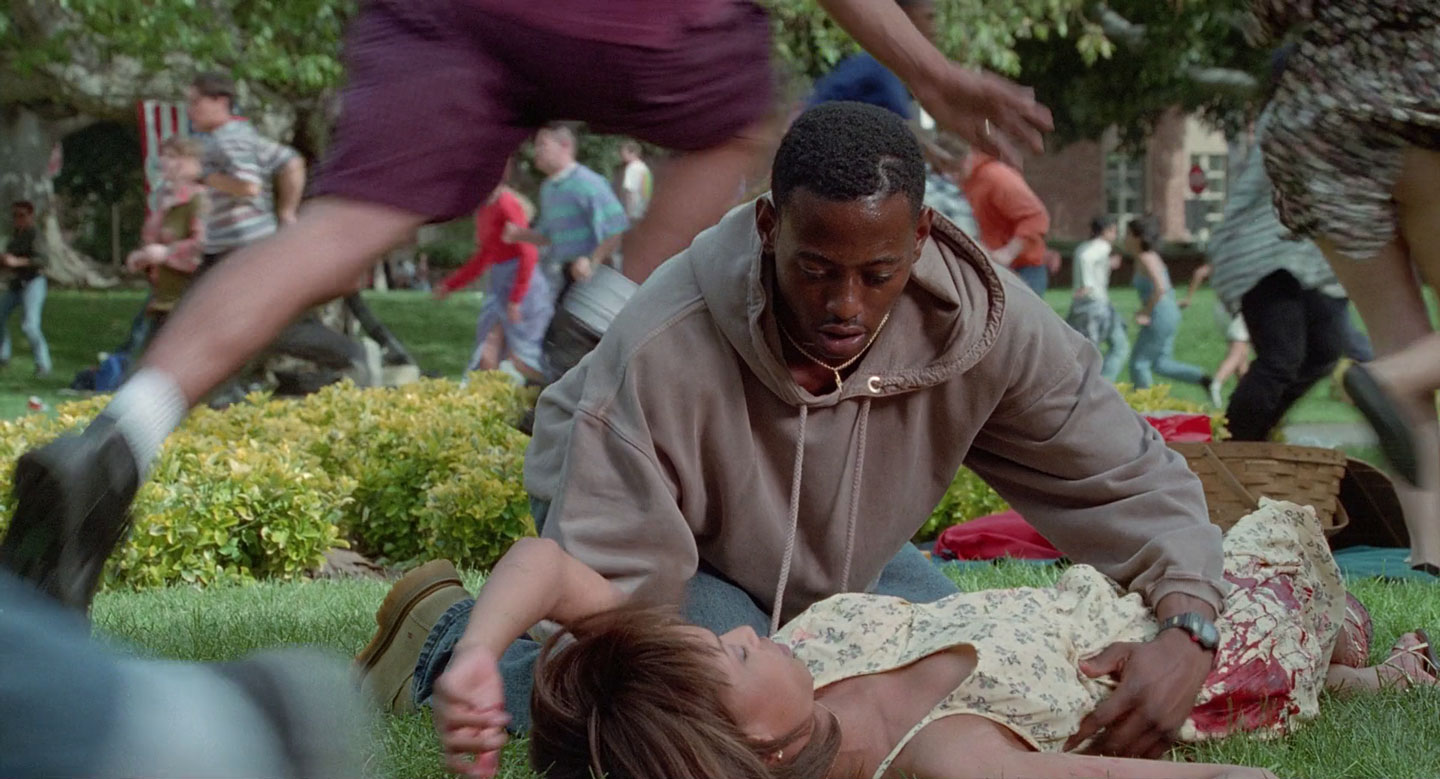 As for the black and white part: Remy turns into a Nazi overnight. Malik turns into a Black Panther overnight. A “rape” will pave the way for a venture into lesbianism. All characters are extreme in their opinions and their behavior. Characters who are in the gray area don’t get much screen time. Because of this Higher Learning eventually becomes a simplistic movie about blacks vs. whites and a sexually confused girl who wants to bring these groups together. This movie could have used some more gray areas.

Higher Learning is not a bad movie. It’s just not a complete movie. It would have been a better movie had has they taken the time to develop en resolve certain plot-lines. The whole lesbian plot seems to be thrown out of the window at the last moment, which is a waste. I mean Jennifer Connelly and Kristy Swanson? I’d buy that for a dollar! The whole Nazi-element makes it all more of a caricature. Nazis as bad guys on a high school complete with swastika tattoos? It’s a bit over the top don’t you think?

The movie does hold your attention the entire running time and at the end I did wish it ran a little longer but there is a lot of room for improvement.