I just caught “Het woeden der gehele wereld” as it was on television last night. I knew of its existence since it was released back in 2006 and I was interested in seeing this for a long time. Two factors made me interested in watching this film and those are: The negative response quickly after it’s release resulting in purely devastating reviews and news-publications about how a mere 2000 people went to the theater to view this movie. This makes you interested if it can actually be true that a movie is really thát bad. The other one is actress Anna Speller, in my eyes the most sexy one of a now long-defunct popgroup named K-Otic. If the movie does really suck, I can always watch her I guess. She makes perfect eyecandy.

Well to cut to the chase, those reviews were right and not a word was untrue. The people who actually paid admission should go to the police and inform them of a robbery because that’s what this movie is. It stole 2000 people of their hard-earned cash with no possibility of getting that back. Hell it even stole people of their time with no option of getting that back either. The only people who get what they deserve are people like me who have a certain interest in movies that are so bad it’s good. Luckily I did see my share of cinematic shit more dreadful than this so this movie to me wasn’t a complete waste of time. How could it be? Anna Speller has a nude scene!

So what’s about then? Is it about goblins living in Nilbog? Is it about a devil worshiping cult with a cripple henchman named Torgo? Nope, far from it. It’s a whodunnit set in and after World War 2. We’ve got a shipper called Joost Vroom. He helps Jewish people for money but that results in his ship being shot up by the Nazi’s. Something that isn’t even shown actually, probably cause the budget didn’t allow for even a miniature to be blown up. Next thing we know he’s a cop who does some spare time bounty hunting Jews. Seems that he want’s a new ship and that’s the only way he can get the money fairly quickly. Then the movie skips 18 years and Joost is still a cop but now has a blackmail-thing going on. To keep him quiet about all kinds of dirty little war secrets he demands some cash from time to time. One of those secrets is that during a raid by the Germans on the house of Aaron and Ruth Oberstein while the latter is giving birth he gets saddled up with the child while Aaron gets away. Ruth is never heard of again and Joost sells the baby to a childless couple in the village.
Once he sees that Aaron is still alive he decides to pay him a visit and demands $20.000 dollars for the ring he has that belonged to Ruth and the whereabouts of his son. This will result in a premature death for Joost by unnatural causes, witnessed by Alex Goudveyl, the missing son, who becomes the center of the rest of the movie.

This movie has just everything working against it; A title that sucks, a script that tries to be a cinematic version of an Agatha Christie novel, too many characters, none of which are actually interesting and too many not likable, bad dialogue, bad editing, bad dubbing and the list goes on and on. Let’s take a closer look: 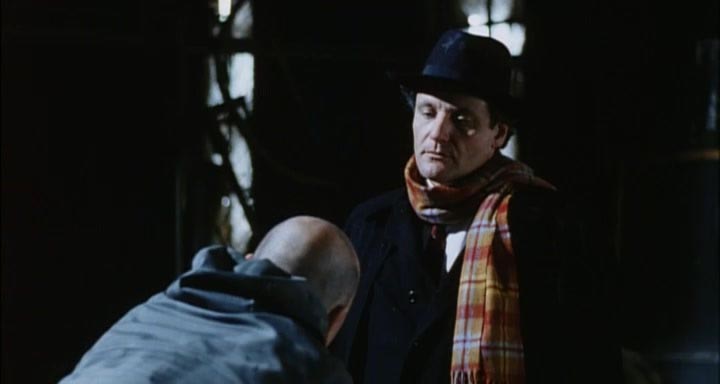 Cees Geel as Joost is the bad guy of the film. It’s not that he is bad enough as he is joining Germans on raids but after the war, just to make sure we know that he is still evil, he not only blackmails people but also is gay and takes a liking in young boys even asking one, Alex Goudveyl, to show him how he masturbates by making that movement on a freshly caught fish. I kid you not. Oh and he tapes this kinds of stuff also. You see, this guy is evil!
Now Alex and Joost are the two characters what the movie centers around. Joost in wartime, Alex in after the death of Joost. One of the other young boys Joost takes a liking in is a guy who’s name I can’t even remember (which happens a lot because there really are tons of characters) and serves no real purpose to the story yet he is in a ton of scenes. Now he takes a liking in Alex and Alex does not seem to blow him off. Makes you wonder if Alex is gay also especially when Alex is seduced by a sexy drugstore-owner’s assistant and runs away. This drugstore owner also has no real meaning for the plot. She gives a clue to the police about the possible killer but that doesn’t justify her being here. This foxy seductress even keeps her clothes on. And so there are tons of characters who don’t have any purpose to the story other than just being there so they can be a possible suspect. In the end the whole movie and it’s solution to the whodunnit revolves around 4 people. The rest is filler so you have 10+ people just showing up at random in scenes just so we as the audience can keep guessing if they have something to do with the murder. But you probably won’t be doing this, and neither did I.

And if you’re still wondering if Alex is gay; No, he falls for Anna Speller the minute he sees her. Oh and they have sex.

Another large part is for Frank Lammers who plays one of two inspectors investigating the murder on Joost, Douvetrap, the other is played by Joost Prinsen who’s on his last case before retirement and unlike any other movie cop actually makes it in one piece. After showing up in a scene or three he’s no more to be seen. They don’t resolve the murder and he shortly dies after retirement. The funeral isn’t even to be seen and his death has no further consequences for the investigation. Makes you wonder again; what was his purpose in the movie anyway? After his death Douvetrap continues to follow up on clues over time. If there’s something this movie loves to do it is to jump in time. The movie is filled with captions stating things like “two weeks later”, “three years later” etc. Once again, totally unnecessary.
Most of his investigation consists of checking alibis and following Alex around from time to time. This results in stupid scenes where we see Alex ringing a doorbell followed by the door opening. When this happens we see Douvetrap in the background ducking away behind a car in the driveway. This happens at least twice. Douvetrap is also the detective who solves the case eventually and this results in a Colombo-like scene where all the characters are on the scene of the crime, even though almost no one has a reason to actually be there, and Douvetrap reveals who was the murderer. The murderer is hinted at to be a man with a hat on and a scarf in front of his face. Too bad this guy wasn’t wearing this in the reveal-scene because then we would have one of those Scooby Doo endings where the disguise gets ripped off and the perpetrator says something like “if it wasn’t for those meddling kids”. That would be neat… oh no, it wouldn’t.

The movie is categorized as a thriller but in my opinion it is more of a thrill-less.

Somehow the production team knew that they were in trouble with this movie. That they were producing shit in another way than with their bowels. In the post-production they did extensive overdubbing resulting in mouth movements that aren’t in tune with the speech. In some cases the dialogue doesn’t match the words entirely. Somebody must have yelled “we’ll fix that in post” during the filming. He should be shot. This dubbing also is very painfully visible when Douvetrap is on one of his driveway stakeouts and he is confronted with two Dobermann Pinchers guarding the perimeter. We hear them barking and growling while they’re standing there just wagging their tail happily with their tongue hanging out of their mouths. The budget obviously was too small to rent a couple of trained dogs for a day I guess.

So I’ve gotten what I deserved. The rumors were true and it’s not such a good movie. But what about the other thing; Anna? Well, she showed up in the movie around the hour mark, maybe even later and is one of those characters that serve no real purpose to the plot, even if she becomes the love-interest. She did grab my attention immediately, but that was mainly due to the fact that almost every scene she’s in she’s wearing something that accentuates her cleavage. I didn’t mind though. It says something about this movie that the only usable screen shot I could find on the internet for using in this review is a screen cap of her breasts. Everything else was too low of a quality or size. That only ever happened to me before with Marabunta. Your film is in trouble when it has something in common with that piece of donkey turd. I should advise Anna to get a new agent. She has been in a tv-series that was taken off the air after a couple of episodes. She starred in this crap-fest and in another box-office-disaster called Honeyz. She’s got ambition, too bad her career is where this movie should be: in the toilet. Time for a Playboy pictorial maybe?

As earlier mentioned the title translates to “The raging of the whole world” which sounds like it’s an epic disaster movie. Well there actually is one disaster: this movie.