It doesn’t happen often but people have actually warned me about “Hellraiser: Revelations”. When asked if I had already seen it, to which I replied with a simple no, they elaborated on how much of a shit fest this movie is. The rating on the IMDB doesn’t help and the average review is in line with what my friends were stating about the movie, only in more dignified words. So I never bothered to watch it since it was apparently only made so the studio could hold onto the rights of the Hellraiser franchise and had some no-name actor take over from Doug Bradley in the role that he made iconic: Pinhead.

This is one of those movies that is a lot more fun talking about it, or just making fun about it, than it is to watch it. While I found it to be better than I thought it would be, blame the extremely negative response by others to this movie, it’s still the shit fest people claim it to be. It’s just not one of the worst movies ever made as some people would make you believe. It is the worst movie in the Hellraiser series, actually replacing “Bloodline” as the black sheep of the franchise. That’s something not even all of the other movies released after that abomination accomplished, which is saying something because none of those installments are actually considered to be very good.

Hellraiser: Revelations revolves around two friends going to Mexico where they encounter a vagrant who hands them the box. One of them opens it and that’s the last everybody has heard from them apparently. We know this because the Mexico trip is all shot found-footage style as the mother of one of the boys is watching the tape one the one year anniversary of their disappearance. How she got it is never explained. On this anniversary the family of both the boys decide to get together as none other than one of the boys suddenly turns up alive and… somewhat well. 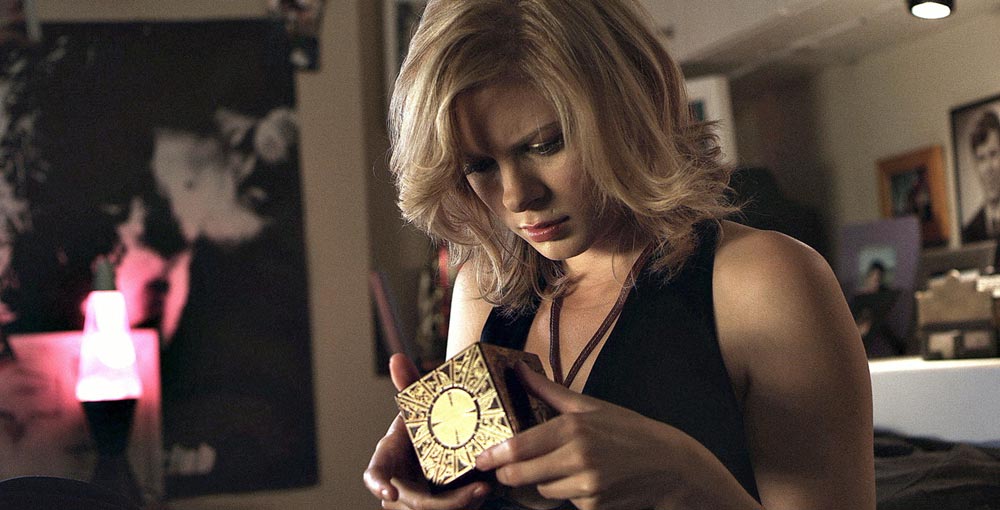 As with almost all of the Hellraiser movies, the protagonist is female. Though revelations lacks a clear centered role, the character coming most closely to that position is Emma (Tracey Fairaway). Emma’s wardrobe consists of a top that is split through the middle, displaying her cleavage all the way down to her bellybutton. If she had any. I don’t want to body shame here, but that piece of wardrobe belongs to a girl with big breasts, and would not feel out of place in a porn movie. As beautiful as she is, her physique isn’t quite right for that kind of attire.

First let me point out one positive thing about the movie. In terms of the story this movie feels more like a Hellraiser movie than the other straight-to-video releases. For the first time since 1996’s Bloodline, there was an actual script written to become a Hellraiser movie rather than rewriting a standalone script to fit the mold somewhat. The story is simple, but has a lot of familiar elements including a skinless person coming back from hell through a blood-soaked mattress. Last time we saw a skinless person was in Hellraiser III. On paper this movie has some potential where it not for the fact that they messed everything else up.

Even though it’s an original Hellraiser story, it truly is all over the place and probably adjusted in such a way it would fit the very low budget of a mere $300,000. That amount is a mere third of the budget of the original movie, which was made almost 25 years earlier. The low budget shoots this movie down before it even has a chance to take off. Hellraiser: Revelations takes mostly place on a few different locations, all of which look like sound sets normally used in daytime soap operas. Even the actors seem to be doing this movie in between taping episodes of something like The Bold & The Beautiful. I don’t watch the Hellraiser movies to see some Award-winning acting, but people like Doug Bradley, Andrew Robinson, Kenneth Cranham and Clare Higgins were at least convincing in their roles. Especially Bradley is noteworthy as he created an iconic character which became the face of the series. He is absent from the franchise for the first time and replaced by Stephan Smith Collins whose puppy-dog eyes make Pinhead look more of a twisted teddy bear. Clearly missing is the cold steel menacing look Bradley had. The the dark poetic lines Pinhead utters here are shallow copies from the original movie and brought without conviction, emphasizing even more how little talent is involved in this production.

Hellraiser: Revelations isn’t a Hellraiser movie, it’s a Hellraiser fan movie, made by some film school students rather than a serious production.