Hellraiser: Judgment is the 10th movie in the Hellraiser franchise. I had to look the exact number up because I lost count as there are so many movies in this series. Aside from the first four, none of them stand out. I’m not saying fourth Hellraiser is a good movie, but at least everybody knows that is the one with Pinhead in space. And the demon dog of course. Who could forget the demon dog? After that it’s all downhill. If somebody would ask me a synopsis of the sixth or seventh movie I could not answer their question. I will probably say “police procedural” because in my memory almost all of the straight to video releases revolved around police investigations. If you are now wondering what Hellraiser: Judgment revolves around; a police procedural.

In Hellraiser: Judgment a serial killer named the Preceptor is on the loose. His gimmick is that he kills people based upon the ten commandments in the Bible. He leaves behind gruesome crime scenes full of messages. Often written in blood. He even leaves a note at every scene explaining into great detail what message he tries to convey. At one point he sows a living dog into the stomach of its murdered owner. He is clearly based upon the seven deadly sins killer in the movie Seven.

Instead of Brad Pitt and Morgan Freeman we get Damon Carney and Randy Wayne as brothers/detectives Sean and David Carter. They receive assistance from Christine Egerton (Alexandra Harris) since they have been unable to solve this case for quite some time now. They go from crime scene to crime trying puzzle stuff together. Of the three detectives Sean is the lead character. He is the typical movie detective who goes to remote locations on his own when following a lead. The guy also has a troubled marriage, alcohol problems and certain inner demons. Most importantly of all: he also has a run-in with a new character: The Auditor. 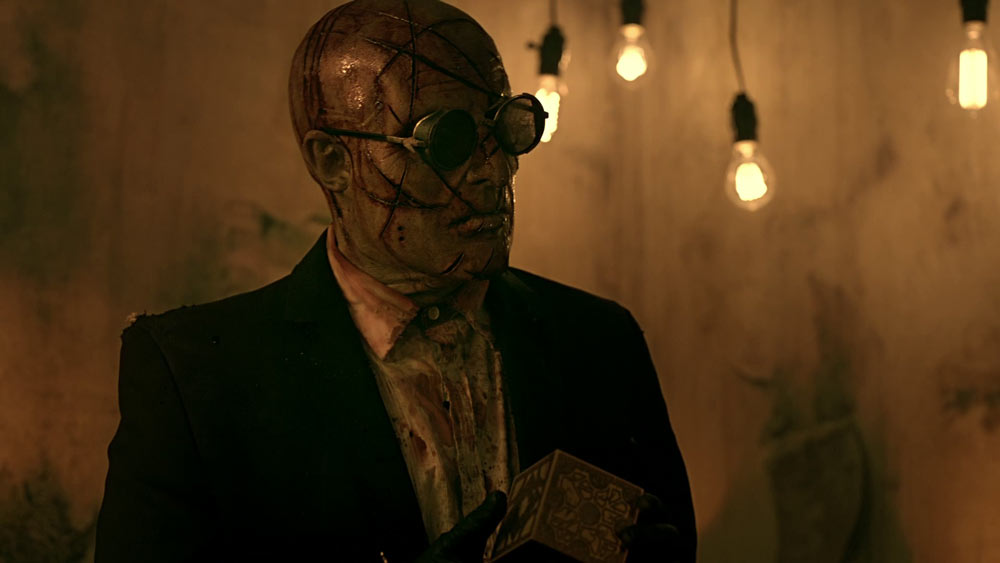 This is where Hellraiser: Judgment sets itself apart from the previous movies. Instead of opening a box, characters of a dubious nature are lured to a remotely located house. Here they find themselves strapped to a chair and interviewed by the Auditor. He types up his interview on an old school typewriter with blood for ink. The interview is then eaten by a half naked fat guy named The Assessor. Instead of digesting it he pukes out the whole thing as some kind of disgusting porridge in a funnel tube. This transfers the vomit to the next room into a food hopper.

Are you still with me? Good. I would understand it if you have had enough by now. But the fun doesn’t stop there:

In the room there are three half naked young women. These ladies feed themselves on the vomit and deliver a judgment. This is the moment Hellraiser: Judgment really earns its R-rating as well as its title. Depending on the verdict the person receives his punishment. In the opening scene a pedophile is strapped on a table. A big fully naked woman comes in and starts cleaning his “insides”. Luckily all of that happens off screen. A guy in a latex outfit complete with gas mask then removes his skin. The tree half naked ladies return and take place next to the table in each front of a tube. The blood of the guy sprays over their breasts and that’s it. Cut to Pinhead contemplating stuff in a chair of some sort. 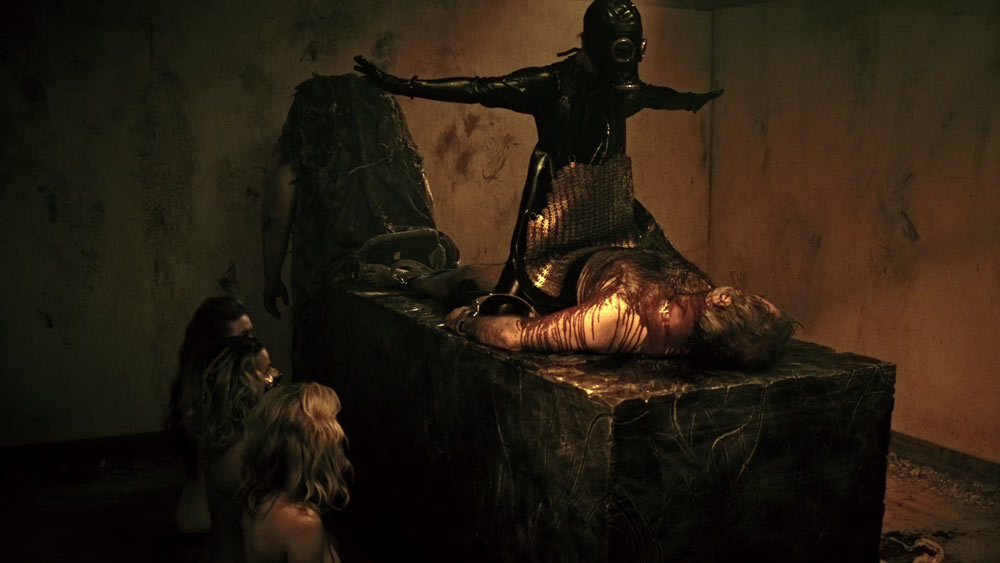 No boxes, no hooks, no lengthy monologues about pain and pleasure. It’s all some disgusting piece of performance art. I really wonder if and how these women show their work on this movie to their friends and family. I looked these girls up and one of them is a performance artist in real life. There is a video online with her and a fellow artist fully naked in the woods where one wraps the other with a cloth around a tree. True story. You can find the video here.

Pinhead’s role is once again that of a background character. The guy lurking in the shadows. It isn’t until the final 20 minutes he really comes into play. It’s that moment the movie actually starts to feel like and actual classic Hellraisermovie. The color palette turns from orange/yellow to cold blue, the hooked chains are back and there are even some lines from the original Hellraiser movie . 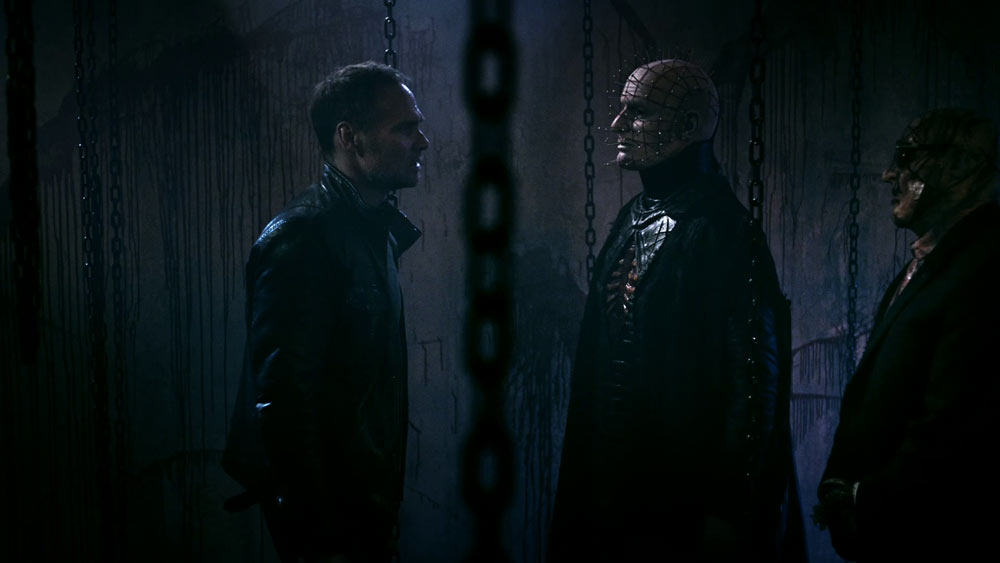 Pinhead is played by Paul T. Taylor. He doesn’t manage to make us forget Doug Bradley’s iconic performance, but he does put in a better performance than Stephan Smith Collins in the previous movie. Not that the bar is set really high since Stephan Smith Collins’ performance was terrible. More interesting is the Auditor who is played by the director Gary J. Tunnicliffe. His character is set up in such a way he could become the next face of the franchise. That could be a welcome change to the series. Pinhead is such a memorable role that you really need a powerhouse performance by a fresh actor to make us forget Doug Bradley. Retiring the character might be the next best option.

There is a bit of stunt casting also. Heather Langenkamp from A Nightmare on Elm Street parts 1, 3 and 7 has a part in this movie. But it is a “blink and you miss her” part as she is only in one scene. Since it’s been more than 20 years since New Nightmare, you might even have a hard time recognizing her. Time waits for no man. Or woman in this case. 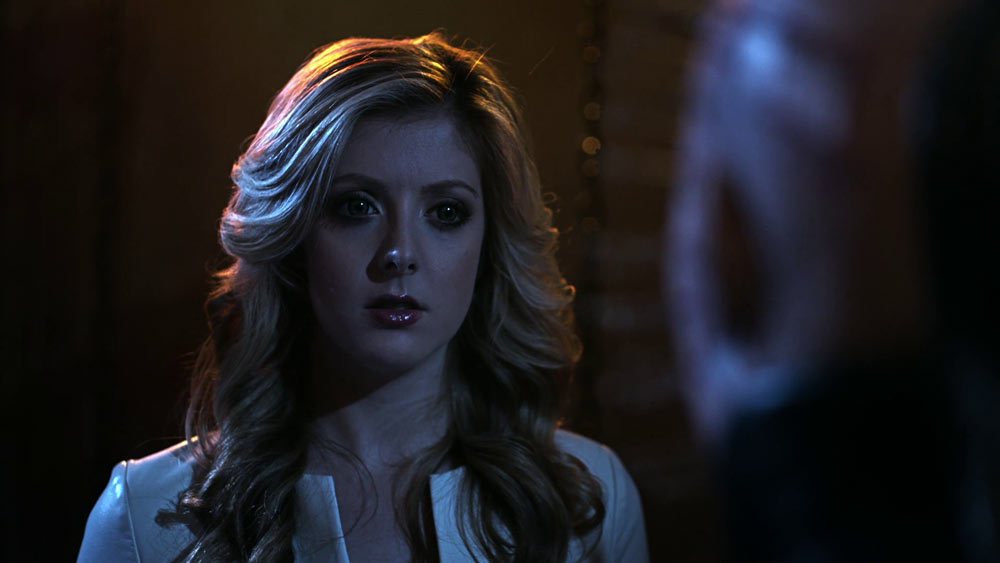 Angels represented by a hot white blonde-haired girl, how original.

With a brisk running time of 81 minutes Hellraiser: Judgment doesn’t overstay its welcome and never really drags. Sadly the movie doesn’t score much points in other departments. Aside the final 20 minutes, which even managed to made me laugh at some point, it isn’t all that interesting. There are plenty of neat visuals but they seem to feel as if they belong in a different franchise. At times this feels more like a fan-made movie, than an actual official Hellraiser movie. That was also the problem with the previous movie.