False advertising or deceptive advertising is the use of false or misleading statements in advertising, and misrepresentation of the product at hand, which may negatively affect many stakeholders, especially consumers.

This description makes sense and sums it right up, doesn’t it? I would like to delve a little deeper into the subject and point out there are a lot of ways to falsely advertise. The one thing I will be focusing on for this movie is the use of  “misleading illustrations”. We’ve all seen these around us; the hamburger on the posters of McDonalds hardly looks anything like the burger you are served. Another nice example are video game commercials with graphics of a much higher caliber than the actual games. This brings me to the 5th installment in the Hellraiser franchise subtitled “Inferno”.

When you look at the DVD cover you will see it only consists of an image of Pinhead and the obligatory text like the movie’s title, a tagline and occasionally cast and crew credits. If you have the DVD/Blu-Ray in your possession just flip the box around and chances are there is another picture of Pinhead there which makes sense because he has been the face of the series all this time, even though he started out as a supporting character in both the first and second movie and was originally only known as the “Lead Cenobite”. With 4 movies preceding Hellraiser: Inferno audiences have come to expect certain things from a Hellraiser movie; at least one being that the poster or cover features the image of Pinhead which brings me back to “false advertising”.

In Hellraiser: Inferno Pinhead has a total screen time of about five minutes to which audiences and fans commented on in a negative way. I understand their frustration with having Pinhead only pop up in the movie’s finale, but that is how the character was originally written. He is the gatekeeper of Hell who can be summoned by opening the box, therefor only appearing when the box is actually opened by someone. Only Hellraiser III ignored that rule by freeing Pinhead from Hell and putting him on Earth free to roam around. This led to another often heard comment: Pinhead was given too much screen time, turning him into a dumbed-down slasher icon. With this knowledge I can come only to one conclusion: the dosage of Pinhead in a Hellraiser movie is a very hard to get right. Show him too little and fans feel cheated, show him too much and fans say that you’re removing all the mystique of the character.

When you overlook the absence of Pinhead Hellraiser: Inferno is very much a Hellraiser movie as the series originally was intended, even if the script wasn’t originally a Hellraiser movie. Instead of trying to find new gimmicks this movies takes a rather low-key approach to the material that takes its cue from the first two movies. In Hellbound: Hellraiser II the character of Pinhead points out to Kirsty that her father is in his own Hell, just as she is in hers. This is the take Hellraiser: Inferno goes with as we follow a shady police detective with questionable morals into a slow descent of madness in his own Hell after he opened the notorious box he found at a crime scene. Though we have been shown many times before how most people get torn apart by hooks after opening the box, time is of course a relative element to supernatural entities. While we see the detective being tormented at every turn, this might only be his spirit we’re following. His real life body could very well be part of a crime scene for all we know. He is in his own Hell, but probably just in his mind. The subtitle Inferno is obviously a reference to Dante’s Inferno, a poem about Dante’s journey through Hell, reminiscent of what the lead character goes through in this movie.

Hellraiser: Inferno was developed to go straight to video and released four years after Hellraiser: Bloodline, the installment that was received with so much disappointment it seemingly killed the franchise for a few years.
Despite the negative response Hellraiser: Inferno received upon its release, I found it to be a refreshing installment to the Hellraiser series even though the plot and set-up of the movie copies “Jacob’s Ladder”, a movie that sadly seems to have been forgotten over the course of time. The whole distorted balance between reality and fantasy is how I imagine Hell would exactly work. Like the vixens underneath the sheets in Hellbound did with Frank, this movie toys with the protagonist for the majority of its running time. I did find it to go on too long as certain scenes were becoming repetitive and the movie would have been better if they exercised about ten minutes of it. 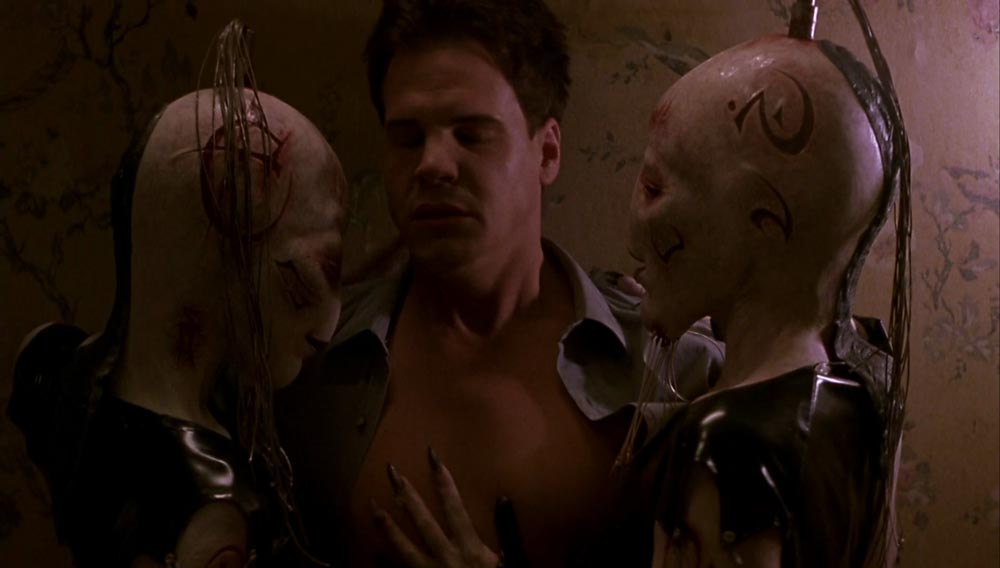 Even though Pinhead might have little screen time, that doesn’t mean other elements from the Hellraiser movies are present in the movie. There is of course the box and there are multiple occurrences of the infamous chained hooks. There are also a couple of new Cenobites whom are all loosely based on the Chatterer cenobite from the first two movies. They are rather memorable and have no gimmicks to them like the Cenobites from part III or the twins from part IV. Especially the two female Cenobites dubbed “The Wire Twins” seem to be a wet dream come true for every body mod aficionado. As with most Cenobites, these are all mute creatures leaving the dialogue to Pinhead which brings up a problem this movie does have: memorable lines.

Throughout the first three movies one of the main reasons the character of Pinhead, and this franchise, became so popular was the writing of Pinhead’s lines. Most of his lines positioned him like a dark poet and lines like “We’ll tear you soul apart” have become modern day classics. In fact, the first three movies are filled with enormously quotable dialogue by the Lead Cenobite. Especially the reviled third movie, has Pinhead constantly talking in colorful phrases. In Bloodline his lines became already less memorable, but in Inferno none of them make a lasting impression.

I think that the combination of the original script and the Hellraiser franchise was a match made in… well not Heaven of course, but it was a good choice. If the original script didn’t get the Hellraiser brand attached to it it would probably be a tough sell, while a script specifically written for the Hellraiser series would have probably sucked even more as it was obvious people had no idea where to go after Bloodline. It might seem strange to edit a standalone story in such a way it fits an existing franchise but realize that originally Die Hard was called Commando 2 and Die Hard With A Vengeance was a script called Simon Says supposedly starring Brandon Lee. So it’s not a bad thing persé and I think that it worked out well.