The depiction of computers and everything directly related to them in movies: something which has puzzled me for some time now. The time when computers where these magical machines where you would type something in and stuff would happen has been long gone. Hollywood has been using the mystique of the computer for decades now without ever fully comprehending the machine itself. Movies like WarGames, The Lawnmower Man, Swordfish and The Net would use the concept of computers, hacking and the internet in a way that might be entertaining but wasn’t realistic. Especially The Net and Swordfish took the concept of hacking depicted on the screen to new lows with illogical user interfaces and in the case of the latter the image of Hugh Jackman in front of a dozen screens. No hacker needs 20 screens to gain illegal access to something. They use mostly one, maybe two screens but that’s it. Who could focus on 20 screens at the same time anyway? With my very low esteem of Hollywood and the way that they present computer related elements on screen, it should come as no surprise that I didn’t expect much from the eight Hellraiser installment: Hellworld.

Just look at that cover and tell me my low expectations are unjustified. It has the image of Pinhead on it covered in a green glow and code-like text blended in. If this isn’t ripping off the Matrix I don’t know what is. It even has a tag line referencing the internet: “Evil Goes Online”. It reminds me somewhat of another Internet themed horror movie: Fear Dot Com.
Man, that was truly a crap fest. Nope, my hopes were not high on this one, especially considering the four preceding Hellraiser movies.

But I have to say it was more enjoyable than I anticipated. 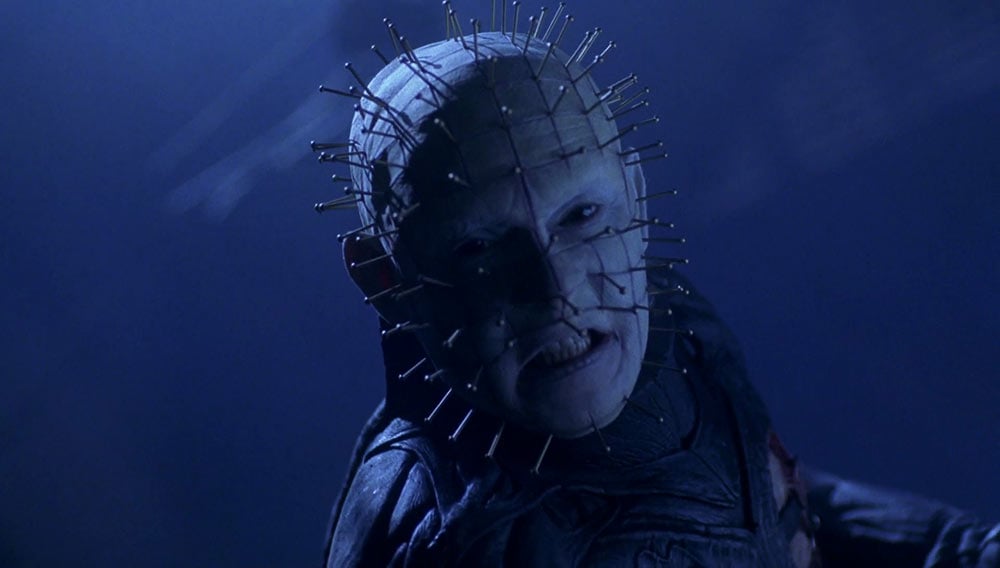 Hellraiser: Hellworld is just as goofy in its representation of an online game as you would expect. People see some shoddy graphics of the box onscreen, type some random keys on the keyboard and the box does something. Not one moment does this feel like an actual game. The game, called Hellworld, is only a small part of the movie as it’s shown only once. Apparently the myth behind the Lament configuration, or the box as it’s mostly called, has become some sort of urban legend. This myth was the basis for the game, which became such a success that everybody now seemingly knows the story about The Box, how it opens, the Cenobites and whatnot. Hellraiser: Hellworld is to the Hellraiser series, what Scream was to the slasher genre. Early on there is a guy walking around in a T-shirt with Pinhead’s picture on it and the Hellworld website features several iconic lines from the first two movies. 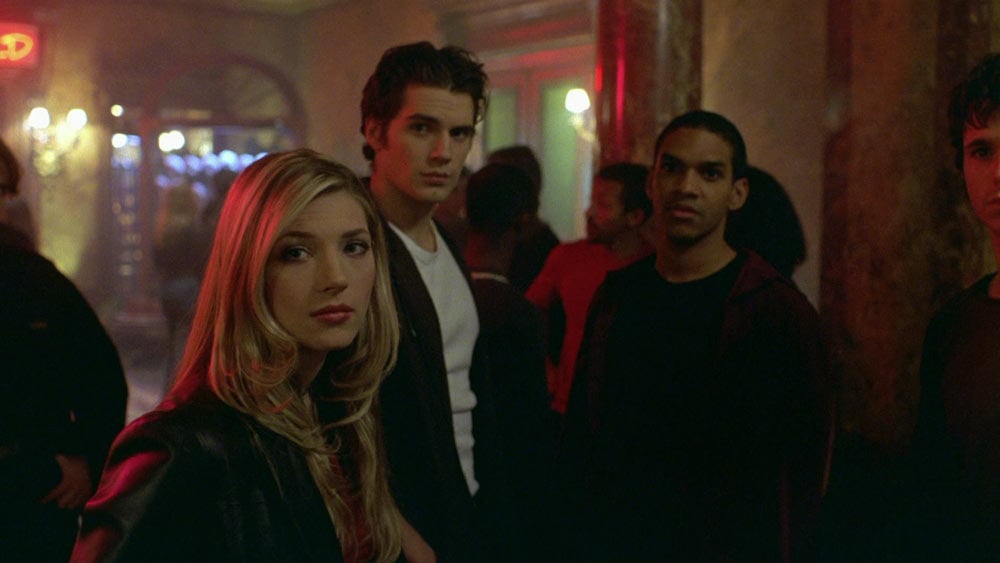 Like Infero, Hellseeker and Deader, Hellworld wasn’t originally a Hellraiser movie but rewritten so that it could become one. This explains why this movie, even more than the previous three, doesn’t feel like a Hellraiser movie at all. The story revolves around a group of teens attending a party that you can only attend if you had unlocked a secret in the online game. At the party all of the teens are picked off one by one as they have a run in with either the host of the party and/or Pinhead himself. You might be wondering the same thing as I did and it’s something one of the victims also points out: this should not be possible, since they never opened the box. Luckily there’s a twist ending to explain all of that. 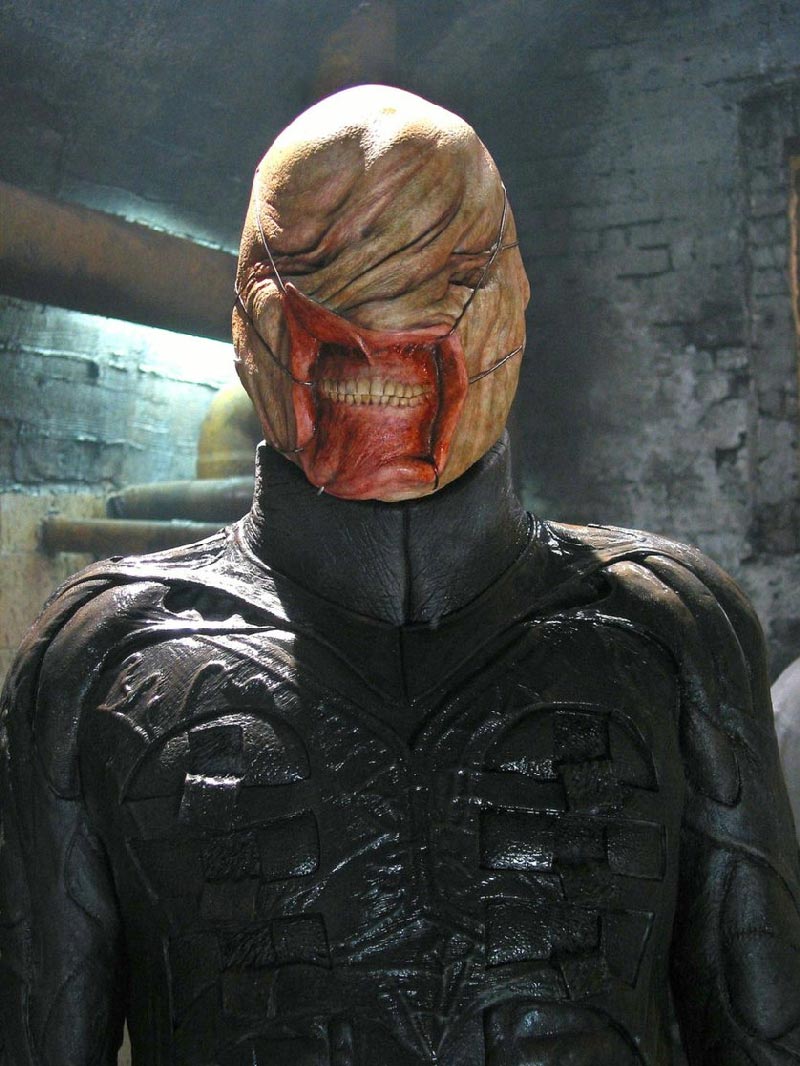 Bloodline. Pinhead popping up like a slasher icon doesn’t make much sense, and he could have been given better lines, but this movie wasn’t yet another bleak affair revolving around some person being already dead the whole time. Hellworld is a stupid movie, no doubt, but it never seems to take itself 100% seriously.
Part of what makes Hellworld better than it should be is the addition of Lance Henriksen. While Henriksen was never a true leading man, his supporting roles have long been elevating movies in terms of quality. He’s a guy that has a long career starring opposite flying Piranhas, a Terminator, Aliens, Jean-Claude van Damme and Steven Seagal among other. Also cast in this movie is a young Henry Cavill, long before he would go on and star as Superman/Clark Kent in the current DC Cinematic Universe. Playing the archetypal stud in this movie he does give one standout moment: his expression when a girl demands that he is supposed to go down on her is priceless…

Somehow Hellraiser: Hellworld caught me by surprise and instead of the crap-fest I was expecting, I was treated to a cheap but fun slasher movie which just so happened to revolve around Pinhead and his merry band of Cenobites. As always in the Hellraiser movies, there are some nice gory scenes and plenty of (female) nudity. It just never feels like a true Hellraiser movie. This movie will probably be a disappointment to fans of the series, but if you’ve made it this far into the series it probably your expectations are probably not that high, so it won’t be too much of a disappointment.