The Hellraiser series is mostly known spawning the famous horror icon Pinhead, who has become the face of the franchise. He was never supposed to be the star of the show, but by putting him on his own on the movie poster it had audiences believe he was. The clever writing of the character as well as the imposing performance by Doug Bradley elevated Pinhead from a supporting character to the central and recurring figure in all of the Hellraiser movies. There is one other character in the franchise that has become synonymous with the series: Kirsty Cotton, the young girl who saw her father, uncle and stepmom end up in Hell but evaded the hooked chains herself on multiple occasions. The last we saw of her was on a tape shown in Hellraiser III, where she was apparently hospitalized and put under psychiatric care. The sixth movie in the Hellraiser franchise, subtitled ‘Hellseeker’, sees the return of the young woman who was clever enough to outsmart Pinhead and his Cenobites not once, but twice even.

Those expecting another go around between Kirsty and Pinhead and possibly hoping for some new scenes deep into Hell will be disappointed. Hellseeker builds on the set-up of Hellraiser: Inferno but tries to make amends for the negative remarks on the movie: the short screen time of Pinhead and the detachment to the rest of the movies. Like Inferno, Hellseeker revolves around a person who is seemingly trapped in his own Hell. The person this time is a guy named Trevor, a businessman and husband to Kirsty. In the opening scene Trevor and Kirsty end up in a car crash killing Kirsty. After waking up in the hospital, lone survivor Trevor is rendered an amnesiac with little to no memories of the crash. Since the body of Kirsty wasn’t in the salved wreckage the police can’t rule anything out so they keep their eyes close on Trevor, who seems to be a real hit with the ladies since the accident. He also seems to see things other people don’t.
And what is the meaning of that strange puzzle box he has in his possession?

Of the straight to video sequels Hellseeker is generally considered the best. It corrects the flaws of its predecessor by bringing back Kirsty into the fold and spread the appearance of Pinhead instead of him only appearing in the end. Fans of the first two movies will probably still be disappointed though, as the return of Kirsty will create expectations Hellseeker does not live up to. The main reason for this is that Kirsty dies in the opening scene and the rest of the movie revolves around Trevor trying to make what’s what with everything that’s going on around him while dealing with amnesia. Kirsty is still featured in several flashbacks, but she hardly owns the story save for a moment alone with Pinhead. That was the only moment in the movie it actually felt like old times. 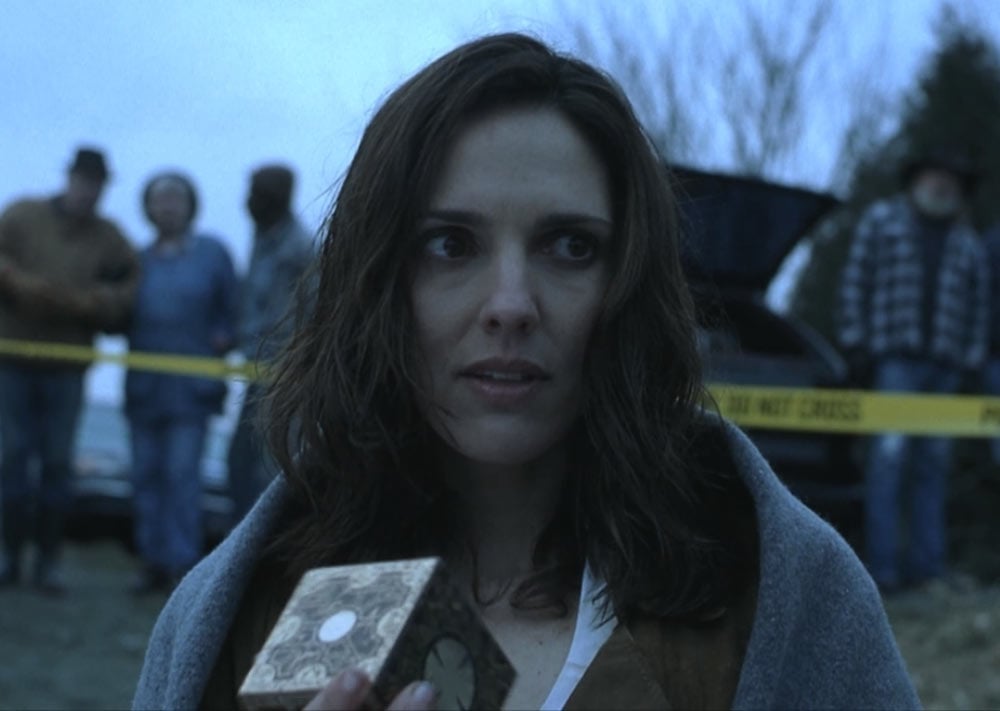 “No more boxes” Pinhead said to Kirsty in Hellbound. Apparently he was wrong.

Like Hellraiser: Inferno, Hellseeker is largely a standalone movie, originally not even intended to be a Hellraiser movie but rewritten to become one. Because of that the similarities to Inferno are puzzling. Is there someone writing scripts that are seemingly remakes of the underrated Jacob’s Ladder? I’m one of the few people that seemingly appreciated Inferno for what it was, but Hellseeker left me somewhat dissatisfied. Especially with a returning character like Kirsty this could have been a nice little throwback to the times this series was considered to be the next big thing. Her return to the series doesn’t add much to the movie, she could have just as well been replaced another character with a different name and it would not have mattered at all.

Anyone who has seen Hellraiser: Inferno will quickly grasp what is going with Trevor even though it is supposed to be somewhat of a twist, but there is luckily another twist you probably won’t see coming. It’s one of the multiple redeeming features of Hellseeker, making up for the recycling of certain elements. Though not as extensively featured as the Wire Twins in the previous movie, Hellseeker does have some nice new Cenobites this time around. Toying around with the hospital setting in which a large portion of the movie takes place, Hellseeker has a medical themed Cenobite dubbed “Surgeon” featuring several medical appliances merged with his face. Two other Cenobites dubbed Bound and Stitch are very much in line with the S&M scene these creatures were originally based upon. Finally there’s a familiar face as Chatterer returns, making the timeline somewhat inconsistent since he died at the end of Hellbound. Then again, so did Pinhead and that did nots top him from resurrecting himself in Hell On Earth.

Hellraiser: Hellseeker makes up for every wrong with a right, carefully constructing an installment in the Hellraiser series that is pretty decent and totally forgettable at the same time. It gives Pinhead more screen-time on one hand, but supplies him with hardly any memorable quotes on the other. That it could have been better with just a little bit more effort almost makes me sad, which I won’t cry about, because apparently “tears are a waste of good suffering”.