As the classic song says “time changes everything” and that certainly is the case with the sequel to Hellraiser: Hellbound. Upon its release it was met with a lukewarm reception with various critics pointing out the recycling of elements of the previous movie and famous movie critic Roger Ebert awarding it with merely half a star in a very negative review. Almost 30 years after its release Hellbound is looked upon more favorably then it was back then. Part of that has something to do with the fact that the sequels in this franchise became more and more worse with each installment, but in my opinion it never deserved the amount of negative reviews it got upon its release. Even if there are certain things that this movie doesn’t get right, there is plenty of stuff it does get right.

Waking up in a psychiatric hospital several hours after the events of the first movie, survivor Kirsty finds herself taking about demons and puzzle boxes to a skeptical homicide detective. His skepticism is not that surprising. What is surprising is the interest head honcho of the instute, Dr. Channard, takes in this story. Channard apparently has been long studying the puzzle box which functions as a gateway to hell, he even owns three of them which are kept under glass in his study at home. Listening closely to Kirsty’s story he bribes some cops to bring evidence from the crime scene to his house: the mattress on which Julia died in the previous movie. By sacrificing a mentally ill patient on the mattress he brings Julia back to life and sets events in motion which will eventually lead to Hell opening up again.

This movie was rushed into production when the first one wasn’t even released yet. The studio probably thought they had a hit on their hand (they were right) and tried to cash in by having a follow up ready a mere year later. The result works both in favor as well as against the movie. The screenplay does rehash certain elements of the original and is uneven at points, but on the other hand almost all of the key-players from the previous movie reprise their roles and in terms of tone this movie is more close to the original than all the other movies combined.

I liked how they used this sequel to elaborate on the Cenobites’ backstories, mostly that of Pinhead who is revealed to be human once. There’s also a new Cenobite in this movie: in the third act Dr. Channard’s curiosity takes him deep into the depths of Hell where he is given a similar treatment as that of Pinhead when he was still a human. He becomes the main nemesis for not only Kirsty and a mute psychiatric patient with a knack for solving puzzles named Tiffany, but also for the four Cenobites we have already met. Even in Hell there are apparently still power-plays.
This does lead to one of the more disappointing moments in the movie when Channard and Pinhead’s gang face off. For a couple of demons from Hell their powers seem somewhat limited and their motorics rather stiff. They just stand their while Pinhead fires off his hooked chains in Channard, who then cuts himself loose and fires organic “spears” at each of the Cenobites returning them to their human form and killing them. This could have been an epic showdown, but all it did was show that these demons are quite a bunch of stiff pussies.

The most interesting part of Hellbound comes when the gates of Hell are opened by Tiffany. We are granted a disturbing tour through hell made up of a lot of avant-garde imagery: babies sewing their mouth shut and clowns juggling with their own eyeballs for example. Meanwhile Kirsty and Tiffany are running through a maze-like structure which seems to have been designed by M.C. Escher. Made long before computers would generate these environments, the use of matte paintings is at some points obvious but overall they hold up pretty well. 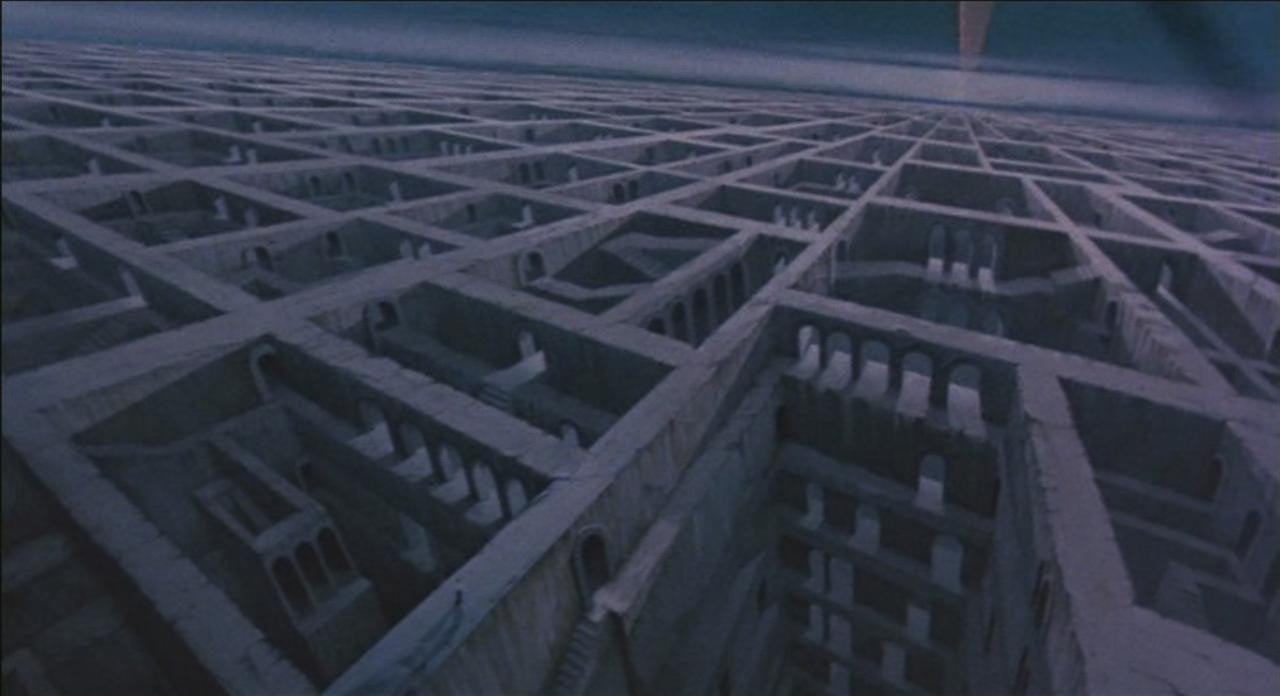 Hell according to M.C. Escher

Hellbound: Hellraiser II is full of iconic quotes and music. Composer Christopher Young has outdone himself by creating another soundtrack with atmospheric as well as bombastic tunes which have a legacy of their own. The very memorable score adds not just to the experience but also to the visual part of the movie. The entrances Channard makes as a cenobite wouldn’t be half as impressive if it didn’t have those deep full horns accompanying it.

Together with Hellraiser, you could see Hellbound: Hellraiser II as being the second part of a 3 hour horror movie. These movies are so similar in tone, style and to a certain degree even the story, that they almost belong together as Kill Bill volumes one and two. Even the ending directly refers to the opening scene of the first movie. The first movie is better, but this one is close on its heels. The story might be a bit over the place, but it makes up for that with a lot of other elements.