Making a direct sequel to a movie that was made multiple decades ago is nothing new. 23 years after the original Psycho was released it was followed up by Psycho 2 which, surprisingly, brought back Anthony Hopkins as Norman Bates. Over the past few years making long overdue sequels seems be a way for studios to make a quick buck, by capitalizing on an existing property. Not taking reboots into account. Earlier this year we got a sequel to the 26 year old Kindergarten Cop. Then starring Arnold Schwarzenegger and this time Dolph Lundgren. Now it’s up to Scott Adkins to fill in for Jean-Claude van Damme in the sequel to one of his better movies: Hard Target. A movie that was released 23 years ago. The same time span between Psycho 1 and 2, but unlike Psycho 2, Hard Target 2 has no ties to the Van Damme movie, other than a plot about rich men hunting people for sport.

In Hard Target 2 Scott Adkins stars as Wes Baylor; an MMA fighter who kills his challenger to the World Championship title in the ring and is left devastated by it. Comes with the job you might say, but it turns out be that the opponent is his best friend. This is pointed out to us in a weirdly homoerotic flashback in which the two muscular men wearing nothing but swim-shorts argue about who is going to win and buy a beach house with the prize money. Supposedly for them to live in together I guess, or at least that is hinted at even though one of them is married.
Traumatized by the death of his best friend, Baylor goes off the grid into Thailand where he makes his money in underground fights. After a lengthy montage in which he disposes of several challengers in a variety of settings, Baylor is recruited by a guy named Aldrich to one fight that will set him up for life should he win. Aldrich is played by Robert Knepper, an actor who got famous playing a sleazeball homosexual inmate in Prison Break. His character is a direct copy of Lance Henriksen’s Fouchon from the original Hard Target, down to several choices he makes and monologues he performs. He even owns a similar single bullet gun. The only thing missing is Henriksen’s commanding gravelly voice.
The fight he’s tricked into doing is a big game hunt where he’s the game and is going to be hunted to by a group of filthy rich people looking for some kicks. The group of hunters consists of a couple of cartoonish characters. There’s a Spanish matador, a tech-company billionaire, a redneck father with his son and Rhona Mitra as a girl with some daddy issues. There was another guy, but he was introduced later and taken out first by Baylor. That actor should really get a new manager, but then again: there are no small parts. 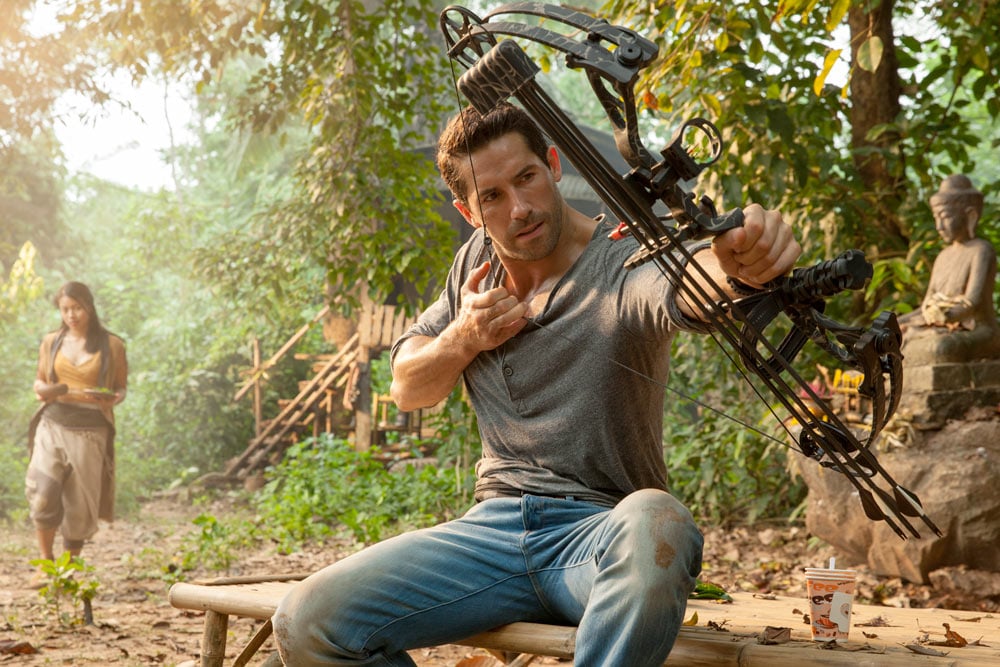 Somebody forgot to move those cups out of the picture

One of the most notable things about the first Hard Target was that it was the first movie directed by John Woo in the U.S. It was a simple Jean-Claude van Damme action movie, but with a certain amount of elegance due to Woo’s directing style. It contained lots of slow-motion, doves, gun-play and brought out the best in Van Damme who never looked more elegantly on screen.
Hard Target 2 is directed by Roel Reiné, a guy whose resume consists of a string of DTV-sequels to movies starring the likes of Dwayne “The Rock” Johnson, Jason Statham and John Cena. Some of the titles he directed are The Condemned 2, The Man with the Iron Fists 2, 12 Rounds 2, The Scorpion King 3, Death Race 2 and 3, The Marine 2 and now Hard Target 2. Apparently this is a go-to-guy for studios who want a cheap follow-up to movies that do not warrant big budget sequels. A guy with no cinematic style of himself, but rather adept at copying someone else’s. Reiné uses everything at his disposal to mimic John Woo’s style to the best of his abilities. To give him credit: at certain times he nails it. There are doves, gratuitous slow motion shots, a bit of gun play and energetic fight scenes. I was rather surprised how energetic this movie is and how nicely choreographed the fight scenes are. Having seen plenty of terrible DTV-movies the last two decades starring guys like Seagal and Van Damme it’s quite a delight to see a rather skillfully made action movie full of good fight scenes.

It does take some time for Hard Target 2 to get to the good part. The first 15-20 minutes are badly acted and filled with cringe worthy dialogue. Adkins and his so-called best friend have zero chemistry together and their line-readings feel like they’re setting up a gay porn scene. Once Adkins goes into exile the movie starts to pick up the pace and becomes watchable as he’s given as few lines as possible and switch the focus from his acting skills to his martial arts skills. Needless to say he is better at the latter.
Adkins’ performance from that point on is as good as you would expect, but unlike the first Hard Target there is no one like Lance Henriksen to give the movie some gravitas other than Robert Knepper. He gives a decent performance, but never has a “Damn that guy is good” moment like Henriksen had. A shame, since they’re both playing basically the same character. Even his main henchman is rather forgettable, unlike Arnold Vosloo’s Pik van Cleef who had some of the best quotes in the original movie. Quotes he delivered with a goofy, but also cool, accent.
But I think the most disappointing character in this movie is Rhona Mitra’s Sofia. Mitra was never the greatest actress in the world, but I found her performance rather wooden. Not only her dialogue, but also her martial arts skills. The wooden acting is probably caused partially by the use of botox. Her punches and kicks looked like they were performed by a 50 year old. She does go out in a rather awesome way, so that makes up for something and there is a rather enjoyable moment when Adkins kicks the shit out of her. This is something we rarely see in this type of movie: where women are considered to be so equal to men they have no problem putting them one on one in a fight. Too bad Hard Target chickens out by having her eventually end up in a final showdown with another woman. 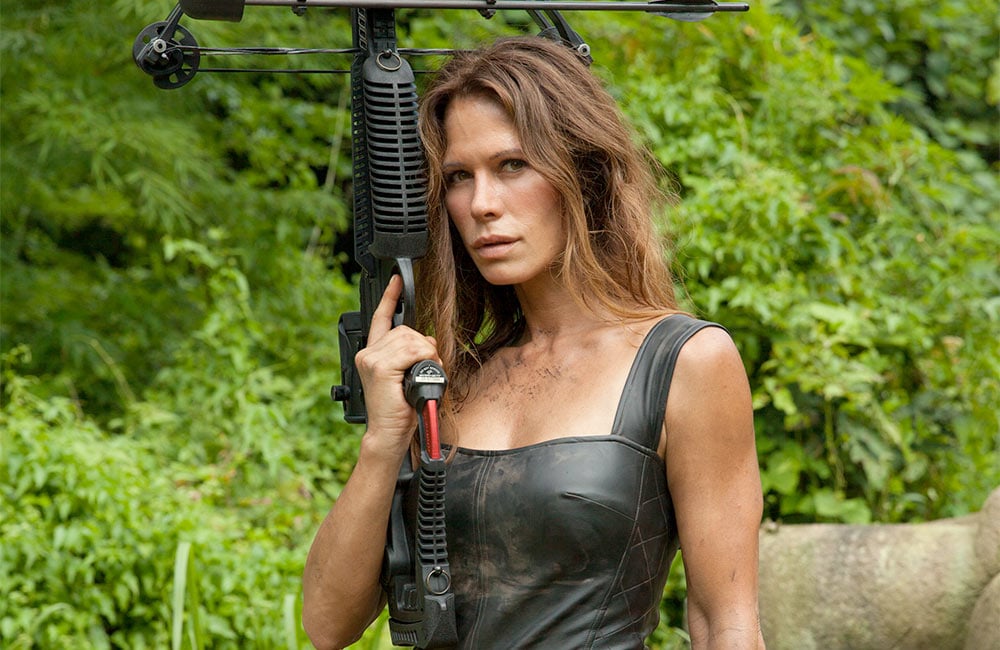 Sadly the movie does lose steam during the final 15 minutes which takes place on a bridge functioning as a border between Thailand and Myanmar. This is where the final showdown takes place between Baylor and Aldrich, but not before Aldrich suddenly pops out 6 random martial artists he calls “The Clean-up Crew” to take on Baylor in a lengthy fight scene. The movie is already crammed full with action pieces and this one felt out of place and too much. By the time it came around we have already seen multiple hand battles, gun fights, a boat chase and seen Adkins even take on a whole platoon of soldiers single-handedly. I was expecting a conclusion, but got another pointless action scene.

Hard Target 2, in all its simplicity, might be a throwback to the 80’s and 90’s action movies but that is more a compliment than it is a negative remark. In terms of style and quality this movie is closer to a DTV movie like “The Marine” than it is to “Against The Dark”. If you can make it through the first 15 minutes of sloppy acting and movie making in general, you’re in for a simple but fun treat.