In the early 90’s two names were competing for the title of martial-arts-box-office-champ. Those names are Steven Seagal and Jean-Claude Van Damme. I’m not sure whoever won but I’m pretty sure that Van Damme’s career shows a more wider range of movie making, while Seagal has more movies that are fun because they all feel they belong to a large franchise since he plays practically the same character in every movie. Van Damme started small, his first two roles being villains before he became the hero in following movies. These were mostly low-budget films but like Steven Seagal did with Under Siege he eventually reached a wider audience (with Universal Soldier) and became a true star. Like Seagal his movies also started to flop around ’97 and he went into the same DTV-business as Seagal did. Hard Target is from 1993 when he was still on top of his game and is legendary director John Woo’s first picture he made in America.

The plot is fairly simple and straightforward. Rich men hunt homeless people with an army background and no relatives. One victim does seem to have some family ties and has his daughter searching for him. Jean-Claude, a bum himself, helps her out to make some easy cash but before you know it they’re in over their heads and find themselves being hunted as well. Luckily Jean-Claude, here named Chance Boudreaux, has his own background in the army (this role could have just as well been written for Seagal) and will do anything to become the hunter himself instead of the prey. 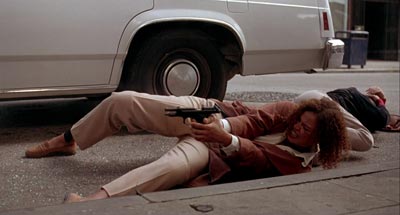 Death Warrant, but under the direction of John Woo this movie reaches a whole new level for Van Damme as Woo’s elegant direction adds grace to the moves Van Damme does on screen. Sure, it’s far from perfect and suspension of disbelief is required rather heavily, but Hard Target is beautifully choreographed and one of Van Damme’s best films to date.
Hard Target’s villains are played by Lance Henriksen and his tracker/companion Arnold Vosloo. Vosloo would go on to star in the two sequels of the Darkman franchise. Those and this movie are both produced by Sam Raimi so he must have made a good impression on him. Henriksen is his usual self with his dark menacing voice, chewing scenery whenever he can. As fate would have it he would star 15 years later in Pistol Whipped with… Steven Seagal.

One of the biggest plot-holes in the movie is the lack of police and people outside. While this movie takes place in and around New Orleans multiple scenes take place on deserted streets. There is some news footage about the police being on strike, but in the real world they still have a certain obligation to respond to stuff like heavily armed men shooting a guy at downtown New Orleans.
Another scene where extras are notably absent is the big motorcycle chase through New Orleans: As the bad guys follow Van Damme through the streets shooting at him there are hardly any bystanders, other traffic or police. While the stunts performed make it a great scene, the fact that it seems to take place on deserted streets take a lot away from these scenes in terms of believability. 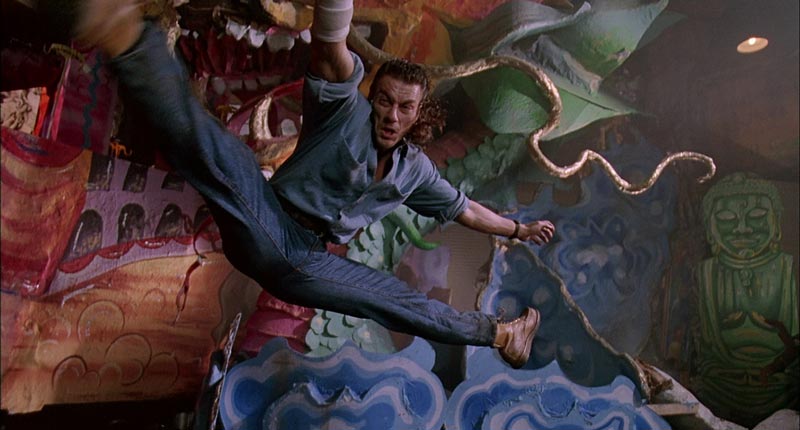 Even though the movie has a brisk running time of 95 minutes, or 99 minutes if you’re watching the unrated version which is available on Blu-Ray, the movie does tend to drag towards the end. Van Damme and his friends are hunted by 20 people and Van Damme of course takes them all out. But this whole end-sequence takes up to at least twenty minutes. That’s 20 minutes of fighting and gunfire in a confined area. It felt a way too long and could’ve used some cutting there. It’s also worth mentioning that the number 20 is uttered by Henriksen at one point, but I’ve got the feeling that Van Damme and his friends took out double that. The finale felt like a live action video game, as bad guys popped up around every corner. Like it’s one of those beat-em-up games like Double Dragon and Final Fight. 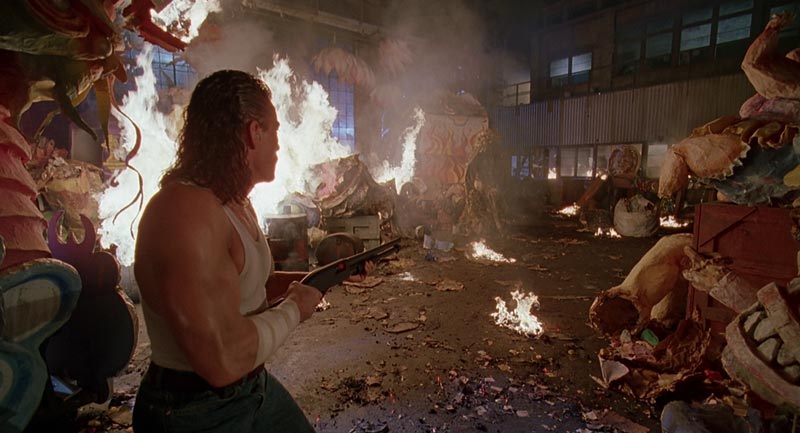 Hard Target is probably one of my top 5 Van Damme movies. The stylish direction by John Woo with his trademark slow motion scenes and pigeons were unlike everything we ever saw in Hollywood movies back then, and it still is very unique. One of the most impressive moments was when Lance Henriksen’s coat caught fire and he takes it off. This isn’t done by a stuntman and what we are seeing is Henriksen actually on fire and still acting convincingly like a bad ass. That is some pure determination right there. It’s one of those moments that would have been done with CGI in today’s action movies. For the actors involved Hard Target was apparently “Hard Work”.

Hard Target is just a simple straight forward action movie like they hardly seem to make any more. It’s a fun flick which I have thoroughly enjoyed on multiple occasions and John Woo seemingly gets the best out of his cast. Van Damme looks great and both Vosloo and Henriksen deliver great performances as they chew through their dialog.